Kylian Mbappé, not Neymar or Lionel Messi, is PSG’s real star this season


An assist that defied the laws of physics from João Cancelo, an unstoppable shot from Rodri and a goal from Bernardo Silva helped Manchester City to a 3-0 win over Everton on Sunday. Rafa Benítez’s team were missing a raft of key players in Yerry Mina, Abdoulaye Doucouré and Dominic Calvert-Lewin, but the same was true for City, with Jack Grealish and Kevin De Bruyne both absent. City dominated the game, restricting Everton to just 22% possession and one shot on target, but they will face a sterner test when PSG visit the Etihad on Wednesday night.

The Ligue 1 leaders also picked up three points at the weekend, winning 3-1 against a Nantes side that had beaten them towards the end of last season. Nantes are now managed by Antoine Kombouaré, who was in charge of PSG at the time of the Qatari takeover. The club sacked over Christmas in 2011 while they were top of the league, so he would have been hoping for more revenge this weekend. He nearly had his way. PSG goalkeeper Keylor Navas was sent off with half an hour to play, and Randal Kolo Muani equalised for Nantes 10 minutes later.

Nantes were pushing for a winner and PSG looked likely to wobble before a shock own goal from Dennis Appiah restored their lead. Lionel Messi scored his first domestic goal of the campaign to give PSG a 3-1 win, a result that looked far more comfortable on paper than on the pitch.

Even though PSG looked shaky at times, it is difficult to judge them on a game where they were missing their first choice centre-back pairing of Marquinhos, who was rested, and Presnel Kimpembe, who continues to nurse a hamstring injury. Ángel Di María, so often influential in matches where PSG’s more heralded names do not sparkle, was also unavailable. The 33-year-old was rested after an international break in which he had played twice for Argentina. PSG played Nantes with an eye on their trip to Manchester – a match that is effectively a showdown for the top spot in their group – but the game at the Parc des Princes on Saturday did reaffirm something about their forwards.

When Neymar and Kylian Mbappé arrived in Paris in the summer of 2017, the teenager was a prospect of incalculable potential. He had seemingly come from nowhere to help Monaco win the Ligue 1 title and advance to the semi-finals of the Champions League. His story – and the fact that he was born in Paris – added to his commercial appeal and made him a fan favourite, but there was an acceptance that he still had much to prove and would not be the team’s focal point in attack immediately.

He had cost €180m, but that fee was exceeded by the world-record sum PSG paid Barcelona to meet Neymar’s release clause. Just 25 at the time, the Brazilian had shaken off the disappointment of the 2014 World Cup and become a global superstar at Barcelona. He looked like the heir apparent to Messi and Cristiano Ronaldo.

Injuries, however, have blighted all of his campaigns in Paris, save the current one. He is still capable of the odd standout performance, but his best says seem to be behind him. To be fair, he has put in more defensive effort under Pochettino – which may have taken the lustre off his goal and assist numbers – but his role has been diminished this season, with Mbappé even accusing him of selfishness in a win over Montpellier, calling him “a bum”.

Messi’s arrival at PSG has taken some of the focus from Neymar – even if he has also battled injury and been slow to hit his best form after a busy summer at the Copa América. However, it’s not Messi who has played the largest role in shifting Neymar to the periphery, but Mbappé.

This looked likely to be a difficult season for the young Frenchman. He was roundly (and unfairly) pilloried in the summer after playing poorly at the European Championship and missing the crucial penalty kick as France were beaten by Switzerland in a shootout in the last-16 stage. He was also castigated by PSG fans for refusing to sign a contract extension amid mooted interest from Real Madrid and Liverpool. He has responded to the disappointment of the summer perfectly, putting in the best campaign of his career so far. He is now the genuine focal point of the attack for both France and PSG, and he is thriving. This season he has already scored 15 goals and laid on 16 assists for club and country.

Some may argue he could have been more influential in some of PSG’s less impressive results (the goalless draw at Marseille, the 2-0 defeat at Rennes). Nevertheless, he has looked more motivated and focused this season, perhaps spurred on by a desire to leave the club with that elusive Champions League title, the domestic crown looking all but assured even at this early stage (PSG have an 11-point lead at the top of the table after 14 games).

PSG beat City in Paris earlier in the group, but have fallen behind them in the table due to dropped points against RB Leipzig and Brugge. Mbappé had little to do with those frustrating results. He was forced off injured in Belgium and played well against Leipzig only to see the hosts equalise through a late penalty.

What we saw from Mbappé over the international break – when he scored five goals in two matches for France – and then against Nantes on Saturday – when he scored one goal and set up another in the 3-1 win over Nice – makes PSG as uncomfortable a proposition for City as one would have expected when the draw was made. This is not down to Messi, Sergio Ramos or any of their other ballyhooed additions over the summer, but because of a player who seemingly wanted away a few months ago but instead stayed and delivered. 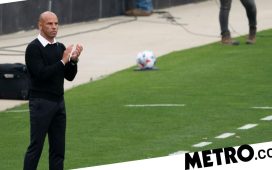