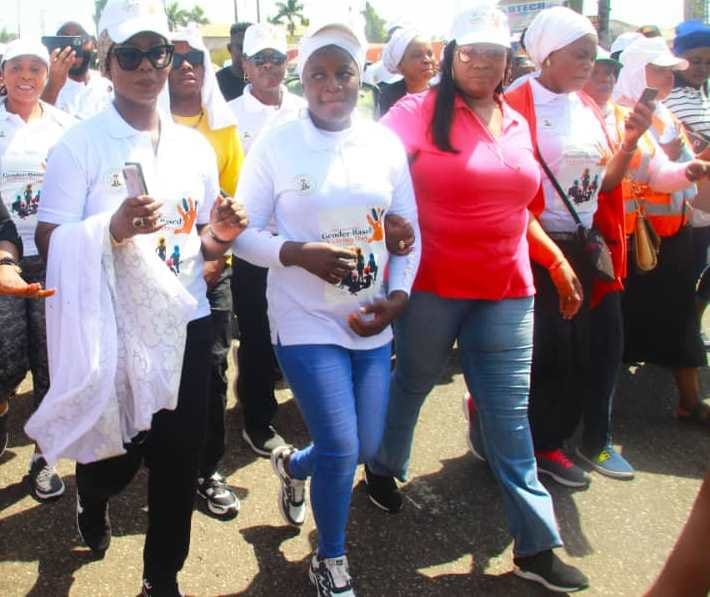 Olufolake Abdulrazaq, the wife of Kwara’s Gov. Abdulrahman Abdulrazaq, on Saturday led some residents of the state on a walk to raise awareness against gender-based violence.

Addressing the participants after the walk in Ilorin, Mrs Abdulrazaq said gender-based violence comes in different forms and can be found in the family, community and society.

“It is an act of violence that results in or is likely to result in physical, sexual or psychological harm or damages to the woman, including threats of such acts, coercion or arbitrary deprivation of liberty, whether occurring in public or in private life.

“The most pervasive form of gender-based violence against women is rape, as it affects all women, regardless of their ages, race, culture or socio-economic stature.

“While names and contexts may differ, women and girls universally experienced rape, sexual abuse and violence at different times in their lives.

“These gender-based abuses are rooted mostly in our patriarchal beliefs, power and control that continue to create a social environment in which sexual violence is pervasive and normalised.

“Exact numbers of rape, sexual abuse and sexual assaults are usually very difficult to confirm due to frequent latitude and impunity of the perpetrators, stigma towards survivors and their subsequent silence,” she said.

Mrs Abdulrazaq, however, noted that in the face of the growing trend, the voice of survivors have placed a spotlight on the issue.

“In the face of the alarming trend of these abuses however, the voices of survivors and activists through campaigns and advocacies such as this have put the spotlight on the issue, such that it can no longer be ignored.

“Today I join other Nigerians to take a stand against gender-based violence because in Nigeria, according to some experts, one in four girls before the age of 18 have experienced at least one incident of sexual abuse or violence.

“Sexual violence is oftentimes perpetrated by people close to the survivor, like family members, close friends or a person of authority.

“This makes it very difficult to report the abuses as the survivors are met with words of shame and stigmatisation.

“These unfortunate incidents can happen to anyone, anywhere and at any time and when such violent abuses happen they affect not only the survivor but the family and the community at large,” she added.

The Kwara governor’s wife however urged all that should know and act to ensure that women and girls are free from gender-based violence.

“We must recognise that gender-based violence is at its root a manifestation of the relatively-low status of women and girls in our society.

“Being aware of this, I founded the Ajike People’s Support Centre where indigent women and youths can access empowerment through vocational skills acquisition and girls through scholarships for their education.

“When women and girls can live free from violence and are afforded equal opportunities in education, healthcare, employment and political participation, they will lift up their families, communities and indeed the country.

“Ending gender-based violence will certainly require empowering our women and girls to speak up for themselves and also encourage our men and boys to speak up and speak out for their mothers, wives, partners, sisters and daughters.

“To achieve the aforementioned however, there is the need for us to eschew all manners of abuse and gender-based violence and to depart from the usual practice of treating cases of abuse with silence.

“Where incidents of abuse occur, the perpetrators should be made to face the consequences of their actions, while the survivor is provided with the needed help and counseling,” Mrs Abdulrazaq said.

She however called on the media, religious and traditional rulers to share the responsibility in the drive to rid the society of all forms of abuses and gender-based violence.