But Kourtney Kardashian, who is now dating model Younes Bendjima, 25, hasn’t ruled out expanding her brood, as she revealed in a new interview this week while promoting the upcoming season 15 premiere of Keeping Up With the Kardashians.

‘It’s such a blessing. I don’t even know how we got here with so many babies but it’s so amazing,’ Kourtney told E! News.

Who knows! Kourtney Kardashian has said ‘never say never’ to having more children in a new interview

The eldest Kardashian says it’s great to watch her siblings Khloe and Kylie be first time moms and ease into motherhood.

Her babies: Kourtney is mom to sons Mason, eight, and Reign, three, as well as daughter Penelope, six with ex-partner Scott Disick

Proud: The eldest Kardashian says it’s great to watch her siblings Khloe and Kylie be first time moms and ease into motherhood

‘And I think I can also now say, “Now you can see how I did it, why I was feeling this way.” I think we just relate to each other and I think you never know how you’re going to be as a mom, so watching them and how they’re doing it – like everyone has their own way.

‘You really can’t predict what you’re going to be like. So I think just watching them is really, it’s really special to see their journey.’

During the last season of KUWTK, Kourtney revealed she was open to the idea of having more kids in her future.

‘I think the thought is always in the back of my mind,’ she said. ‘Never say never.’

‘It’s amazing watching them,’ the KUWTK star gushed of younger sisters Khloe and Kylie who became mothers for the first time earlier this year

Her beau: Kourtney is now dating model Younes Bendjima, 25, who she recently enjoyed an extended vacation in Italy with 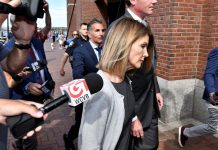