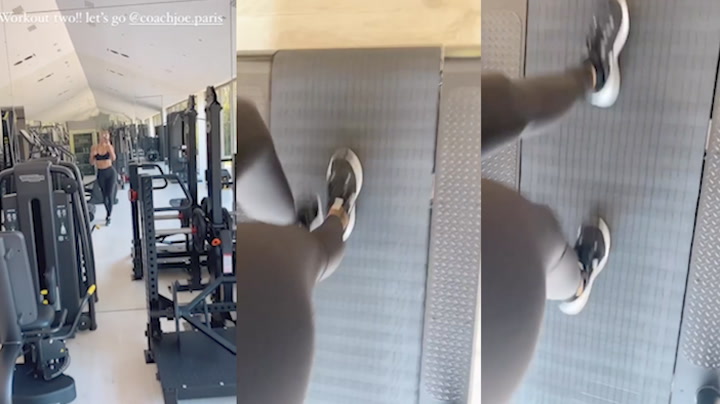 Khloe Kardashian works out at gym with personal trainer

Kourtney Kardashian fans were left heartbroken after an old clip of her resurfaced showing her in tears over her cheating ex Scott Disick.

The clip shared on a Kardashian fan account on TikTok, showed a heartbreaking moment on a episode of Keeping Up With The Kardashians when Kourtney was overcome with emotion during a chat with her sister Kim.

The Poosh founder claimed she was being mistreated by Scott, who she shares three children with, as she wiped tears from her face.

She said: “I’m just literally on the verge of a mental breakdown.

Kim then encouraging her to “move on” from Scott, to which Kourtney replied: “I just can’t believe that this is what my life is at right now, you know?

Kourtney was overcome with emotion during a chat with her sister Kim.
(

“I worked so hard to like keep this family together. It just makes me sad for the kids, but it’s like better off he’s not being a good partner to me.

“I could never rely on him, depend on him, for one single thing, and I don’t want to like show my kids that that’s okay,”

He oldest son Mason then interrupted before Kim shielded her nephew away from Kourtney’s face and took him into another room where she played piano with him.

The couple split in 2015 but still co-parent their children together.

The Poosh founder claimed she was being mistreated by Scott

Another clip shows the reality TV babe weeping in a bed watching Hollywood blockbuster Titanic as she told the camera: “In my life, there’s not tons of romance. It’s fun to watch these overly romantic movies. That’s how I get my romance kick.”

She then rang Scott and told him: “Hey I’m watching Titanic. It’s crazy how this kind of romance existed in the world.

“Like why don’t we ever….” she said before the father of three cut her off.

“Why don’t we have the chemistry that Leo Dicaprio and Kate Winslet had in the Titanic?

Scott screamed: “I’ll tell ya one reason. Cause we’re not in a movie!”

Scott is then seen hopping into Kourtney’s bed and saying: “I love you, but this is a movie.”

“People have this kind of affection and passion and romance,” Kourtney said.

He then spoke to the camera and said: “I love Kourtney, but right now she’s definitely delusional.”

Kourtney responded: “Leave me, I’ll sit here and cry and watch Titanic and wish that I had some romance in my life.”

In response to the clips, heartbroken fans rushed the comments section and slammed Scott.

One wrote: “Calling her ‘delusional’ instead of caring about her emotions.”

“Scott only dates 19-year-olds because they have lower expectations,” a second said.

A third wrote: “Perfect example of asking the wrong guy.”

A fourth added: “I remember watching him be the villain in their show and just felt sick for her.”