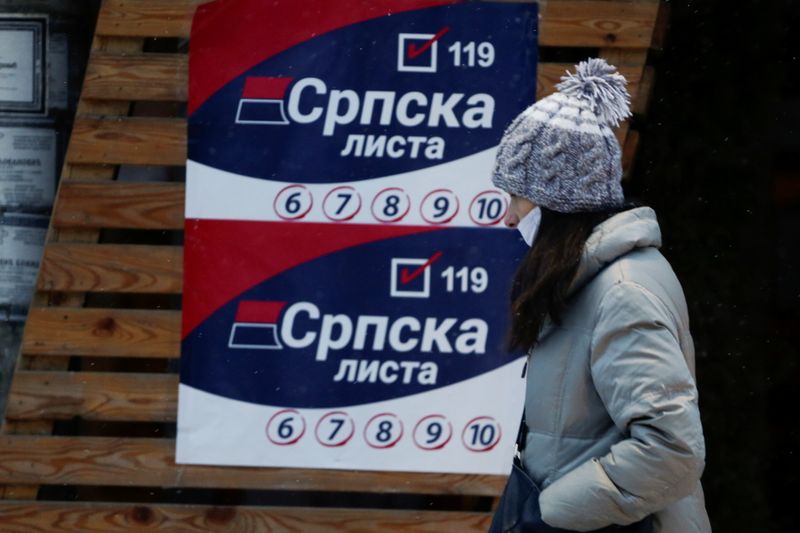 © Reuters. A woman passes by electoral posters of the Serbian political party Serbian List (Srpska Lista), in the town of Gracanica

PRISTINA (Reuters) – Kosovo goes to the polls on Sunday in a parliamentary election that an anti-establishment party is expected to win by a landslide, further complicating Western efforts to resolve a decades-long territorial dispute with Serbia.

Opinion polls predict the Vetevendosje party will win between 45 percent and 55 percent of the vote among ethnic Albanians, who make up 90 percent of the 1.9 million population. While that would be nearly double its result in the election held in 2019, it may still need a partner to govern.

Albin Kurti, the leader of Vetevendosje who served as prime minister for five months last year, won votes on pledges to fight widespread corruption and on a stance that there should be no compromise in a dialogue with Serbia, which lost control over Kosovo in 1999 after NATO bombed its forces.

“A dialogue with Serbia is not one of the first priorities,” Kurti said in a televised address on Friday. “I cannot listen to weeping and screaming in Belgrade about how Serbia lost Kosovo.”

Serbia, backed by Russia, does not recognise Kosovo’s independence, citing the need to protect the rights of its Serb minority. Negotiators from the European Union and U.S. have failed to secure a compromise to allow Kosovo to join international organisations such as the United Nations and NATO.

With one third of its workforce unemployed and a gross domestic product per capita of $4,300 Kosovo remains the poorest country in the Western Balkan region.

“I expect to see a radical change in the health and education sector, those things that we need most and also in justice,” Edin Pula, a 21-year old resident of Pristina, told Reuters.

Vetevendosje may have to join forces with either the now-ruling Democratic League of Kosovo (LDK), opposition Democratic Party of Kosovo (PDK) or Alliance for the Future of Kosovo (AAK).