It’s impossible to sum up Kobe Bryant’s dedication to basketball in just one anecdote, but there’s one small incident that comes close to doing it justice . No, it wasn’t one of the countless famous achievements from his 20-season long NBA career. Instead, it was within a picture he posted on his Instagram just a few months before his untimely death in a helicopter accident on Sunday.

Bryant posted a picture of himself standing aside his Mamba Sports Academy youth basketball team. The girls, all roughly middle school age, look uniformly glum while holding trophies that marked what was, for them, a disappointing fourth-place finish. When Bryant first posted the image, which dated back from two years prior, his caption included the following statement: “The 7th player (not in pic) missed this game for a dance recital so that should tell you where her focus was at this time.” As Deadspin’s Giri Nathan noted, Bryant felt the need to edit his comments to explain himself slightly better and added the following: “meaning she enjoyed dance more than ball which is fine. Now? She eat sleeps and breaths the game.”

Knowing what we know now, that both Bryant and his daughter would lose their lives en route to the Mamba Sports Academy, there’s a sad postscript to the image. At the time Bryant posted it, however, it made the social media rounds as a humorous reminder of his single-minded passion for the sport. With any other famous athlete, this would have been an opportunity to earn some easy goodwill: here was this living legend, who had won five NBA championships and two Olympic gold medals and was the all-time scorer for the Los Angeles Lakers, in his new rule as a youth coach. Instead, it was a sign that he was bringing the exact same mentality he had winning titles with the Lakers to his new position. it didn’t matter if you were a Hall of Fame teammate or a young dance enthusiast, Bryant was going to demand the most from you.

England's cricketers to hand back £500,000 and donate to charities 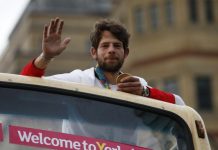