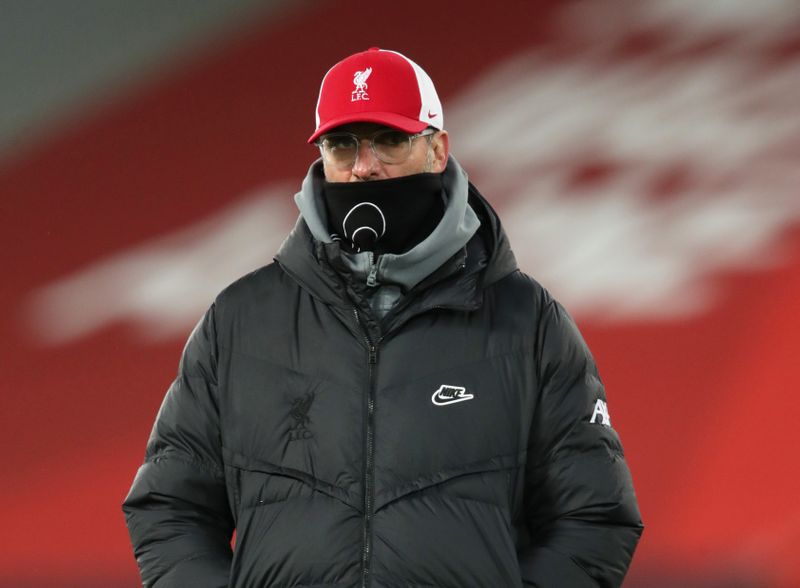 (Reuters) – Liverpool hit a new low in Thursday’s 1-0 loss to Burnley, extending their winless Premier League run to five matches, but manager Juergen Klopp has backed his team to rediscover their ruthless streak.

Liverpool are fourth with 34 points at the halfway stage of the league campaign, six points behind leaders Manchester United whom they face later on Sunday in the fourth round of the FA Cup.

Klopp said he was baffled by Liverpool’s setback against Burnley but said the result could spark the reigning league champions back to life.

“We lost that game and it was a really low point. It’s not that I thought, ‘Who cares?’,” Klopp told the British media ahead of the clash with United.

“When I think back, I can’t find a reason why we lost that game but we did. It happened and sometimes you need a really low point to change things properly and that’s for sure what we’ll go for now.

“If we would have won in a bad game, the world would have said, ‘OK, it’s not the football they usually play but they’re back on the result path’… In the long term it wouldn’t help. It can be a real help if we use it.”

Klopp said that he had full faith in his players after Liverpool’s first loss at Anfield in nearly four years.

“I can imagine what a lot of people think about us in the moment. People don’t change overnight. People face challenges they’re not ready for and sometimes you don’t even know a challenge will come up,” Klopp added.

The players, he said, “are still brilliant people and brilliant characters, all of them. All of them made happen what happened in the last few years and they don’t change overnight. It’s still a really good group.”