A police officer serving with the Federal Capital Territory(FCT), Police Command, have been shot and killed by kidnappers operating at Tungan-Maje community in Gwagwalada Area Council of the FCT.

The kidnappers who invaded the village Tuesday morning also succeeded in abducting four residents of the village.
The deceased police officer was said to have been killed during a shootout between the kidnappers, police and the vigilante group in the town.

It was gathered that the gunmen first attacked residents of Anguwar Samu in Tungan-Maje, and whisked away two persons after an exchange of gunfire that lasted over one hour.

A resident of the village who does not want to be mentioned in print told Daily Sun that “The entire residents of Anguwar Samu were gripped with fear because of the gunshots but unfortunately, they succeeded in abducting two people,”.

He further stated that “after the police were overpowered, the kidnappers proceeded to New Poultry area of the council were they abducted two other residents and ran into the bush. He said the kidnappers were yet to contact the relatives of their victims.

The source also said that a police officer and a vigilante member who sustained injuries in the incident have been taken to an undisclosed hospital for medical attention.

Confirming the incident in a statement, the FCT APolice Public Relations Officer, Yusuf Mariam, gave the name of the deceased officer as Inspector Ambi John attached to Operation Puff Adder. She said the officer died as a result fatal gunshot injuries he sustained during the operation and was rushed to the hospital where he died while receiving treatment.
She also said the police has launched a rescues operation to free the abducted persons.

The statement made to Daily Sun reads; “The FCT Police Command repelled multiple attacks by suspected kidnappers in the wee hours of Tuesday 13th April,2021 along Dankusa, Angwan-Zegele-Zuba axis.

Following a distress call from Angwan Zegele, a joint team of Police Operatives from the Command and Operation Puff Adder responded promptly as they engaged the heavily armed hoodlums in a fierce gun battle. Unfortunately, one of the gallant officers one Inspector Ambi John attached to Operation Puff Adder sustained fatal gunshot injuries during the operation and was rushed to the hospital where he died while receiving treatment.

“However, the Command has launched a strategic operation to the rescue four persons abducted from Dankusa still in custody of the* hoodlums who escaped into the forest bordering the FCT and Niger State. *Nonetheless, Operatives of the Command’s Anti-Kidnapping Squad have made some arrests in connection with the abduction.*

“In view of the above, the Commissioner of Police CP. Bala Ciroma wishes to commiserate with the family of the officer who paid the supreme price in service to the Nation and ensure that all the victims are safely reunited with their families. Furthermore,the Commissioner of Police reassures residents of the Command’s undeterred resolve to secure of lives and property within the FCT.

Sent from my iPhone X 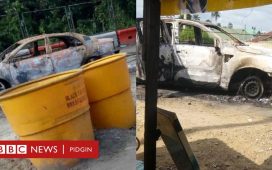