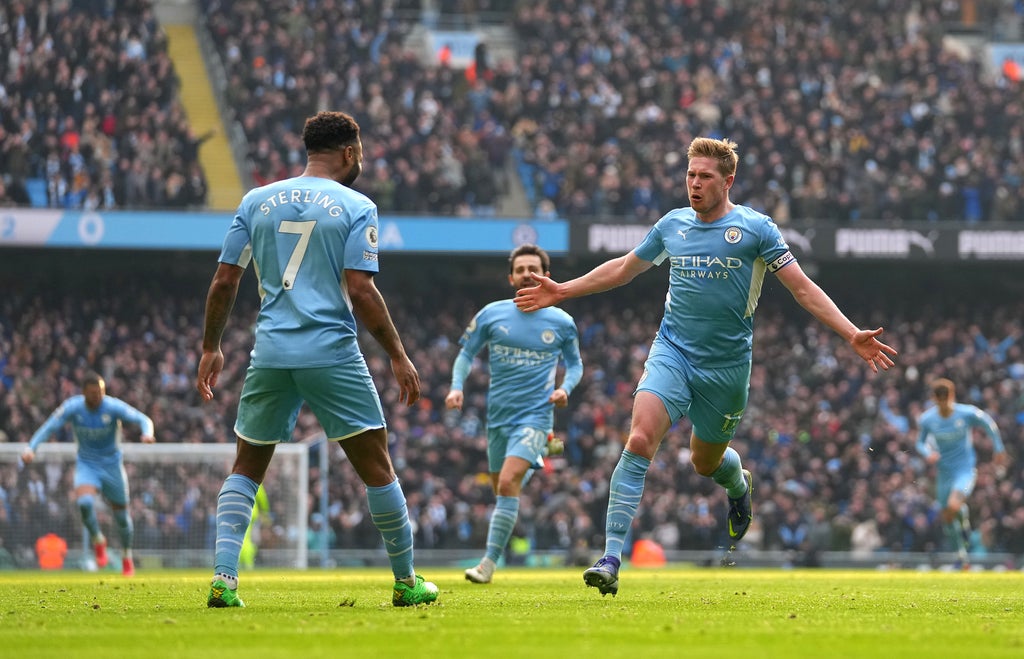 A goal fit to win any match, and that has almost certainly won the 2021-22 Premier League title. Kevin De Bruyne’s sublime strike was a moment that suitably reflected Manchester City’s superiority, putting the defending champions 13 points clear of Chelsea after this 1-0 victory. As if to similarly emphasise how some of that lead has been down to rivals’ own failings, Kepa Arrizabalaga might have done better for the goal.

That shouldn’t be to take away from De Bruyne’s strike, or City’s quality. As with the huge gap at the top of the table, and despite the narrow victory, they were so much better than Chelsea.

Other numbers maybe say that better than the 1-0 scoreline. City are now on course for 97 points, and have won 12 games in a row, making Guardiola responsible for four of the nine longest winning streaks in Premier League history.

His side, to quote the Catalan himself, have “destroyed” the league. Here, they just squeezed the life out of the European champions, before De Bruyne released.

It was often masterful, if occasionally a little mundane for what could theoretically have been billed as “a title showdown”.

That is what City have done to this league, though. Through their utter dominance of the ball, they have sapped all competitive tension out of the top of the league, and so many matches. That shouldn’t be to absolve Chelsea, though. They had justifiably been billed as City’s main challengers, but have fallen well short of that. They are now on for 74 points themselves, and looked to have lost the little momentum they had built up in the last few games. Here, they again just had to set up in a way that was subservient to City.

A lingering lack of chemistry at single areas in these otherwise super-funded sides that initially prevented them making good on those errors when they came.

City’s high line naturally meant they gave up space behind a few times, but it is clear that Romelu Lukaku and Hakim Ziyech don’t really get each other yet. Christian Pulisic meanwhile seemed completely isolated, as if detached from the system as much of the game. That meant Chelsea’s breaks went through Ziyech and Lukaku but there were more than a few moments when it was just off between them. Either the run was wrong or the pass was wrong.

In the first big moment of the match, Lukaku looked to feed the playmaker inside only for his pass to be botched and Ziyech to run offside in any case. Moments later, Ziyech tried to feed the Belgian, only to play a through ball that was more like a back-pass to Ederson.

Chelsea were clearly trying to play on the counter, so it made it all the more surprising that Timo Werner didn’t start. Once Ziyech had slowed down another counterattack in the second half, Tuchel sent for Werner and Callum Hudson-Odoi.

That happened to be when De Bruyne exploited the space Chelsea left in behind.

It was very much a case of City’s best player showing them how it was done. The directness was almost as impressive as the divine nature of the finish.

Up until then, it was as if Guardiola’s side had been too consciously trying to work it – not least Jack Grealish.

There is little doubt that the England international has the talent to be hugely productive once his manager’s distinctive approach finally drops for him, but for the moment it means all the individuality and fizz has gone out of his game.

He isn’t exactly a player on a wave of confidence.

When Chelsea finally made what was a rare first-half error, and the otherwise polished Mateo Kovacic gifted Grealish the ball, he was offered the sort of opportunity that he would have finished with ease at Aston Villa.

He instead hit it as if almost rushing it, although Kepa did force him to make a decision.

The goalkeeper wasn’t quite so commanding for De Bruyne’s goal, although most of that was about the majesty of the finish.

City had been getting that bit closer to goal up to then, without necessarily looking closer to scoring. They didn’t create an abundant amount of chances from open play.

So, De Bruyne decided to go from distance.

Picking the ball up just inside the Chelsea half, the midfielder surged forward before arrowing the ball past Kepa and into the corner.

The fact he just skipped around a midfielder as domineering as Kante served to underline the point, adding an extra mark of quality to the goal.

That’s the quality of the team.

They are now surely headed for the eighth title of their history, with four of them set to come in half a decade under Guardiola.

That says it all. De Bruyne’s strike pretty much decided it all.