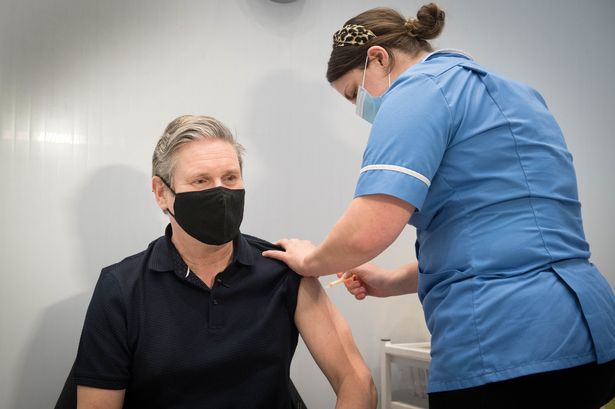 Keir Starmer has urged anti-vaxxers and jab sceptics to “think again” as he prepares to get his booster vaccine.

The Labour leader, who is due to have his third dose at a community pharmacy on Monday, implored the unvaccinated to “consider the impact” of their choice.

It comes after figures showed more than 90% of Covid sufferers needing the most specialist care, using artificial lungs, were unvaccinated.

Between 20% and 30% of critical care beds in England are occupied by Covid patients and three-quarters of those were unjabbed.

Sir Keir said: “It is frustrating and worrying that medics are seeing too many hospital beds and NHS resources are taken by those that have chosen not to get the vaccine.

“I am calling on those who are eligible but unwilling to get vaccinated to consider the impact of their decision and think again.”

“But what we find difficult is that giving care to patients who have chosen not to be vaccinated has a knock-on effect on other patients.

“We are still human beings and we still get angry at things that we think aren’t just.

“It does take a toll on nurses and I am also hearing about some patients who are being rude, disrespectful and even violent to some nurses trying to look after them.”

But Labour said this was still down from a peak of more than 600,000 jabs a day during the first vaccine rollout.

The NHS has also said it could take until December 13 to formally start giving people boosters after three months, rather than six.

Sir Keir said: “We are stronger when we all come together and act to protect ourselves, our loved ones and our communities from the virus.

“But with the number of vaccinations down a quarter from the peak earlier this year, we simply cannot afford for the Government to take its eye off the ball in speeding up the rollout of the booster programme. The Prime Minister needs to break the habit of his tenure by stepping up and getting a grip.”

It came as a top number-cruncher warned Christmas celebrations could lead to tougher coronavirus restrictions in the New Year.

Cambridge University statistician Professor Sir David Spiegelhalter warned: “There will always be a small group of people and in a way, they take advantage of what the rest of the community are doing.”

He rang alarm bells about the potential impact of festive socialising as employees attend work parties and families see loved ones.

The next review of coronavirus restrictions in England is due a few days before Christmas.

“Just like last year with the Alpha variant, this is a terrible time for a variant to come along, when the next two weeks are probably some of the highest-risk periods with a lot of indoor socialising that we know is extremely high risk,” he told Sky News.

“It’s appalling timing. I’m sure the Government would love not to disrupt Christmas – what happens after Christmas of course is another matter.”

He added: “The New Year is quite likely to see quite a lot of challenges to face – and as Sage have said, that could very well mean more stringent measures.”

It is unclear how dangerous the Omicron variant is
(

Omicron is “spreading pretty rapidly” in the UK, a Government adviser warned.

Professor Mark Woolhouse, who is a member of the Scientific Pandemic Influenza Group on Modelling (Spi-M), told BBC1’s The Andrew Marr Show: “The Omicron variant is highly transmissible, it appears to be spreading very rapidly in South Africa and the early signs are that it’s spreading pretty rapidly in the UK too.

“If those trends continue then over the course of the coming weeks and months, Omicron could even come to replace Delta entirely right around the world.”

Latest figures showed 43,992 new UK coronavirus cases – the overwhelming majority of which are the Delta variant.

Another 54 deaths were recorded – though reporting is often delayed over the weekend.

The President of the Royal College of Emergency Medicine said the NHS will be in a “very, very difficult position” if Omicron triggers a surge in hospital admissions.

Dr Katherine Henderson said hospitals were struggling to cope as they entered winter.

“It is pretty spectacularly bad now, it will get worse – and if the new variant becomes a thing in terms of numbers and translates into hospital admissions, we are going to be in a very, very difficult position,” she said.

“We will always still be there. We still want patients to come but we do have to help people to understand that really at the moment the service is so stretched that an extra push could be very very difficult.”

But despite the mounting warnings, the Government stepped up efforts for people to enjoy the festivities.

“All the family, friends, loved ones being able to get together in a way we haven’t been able to do for a couple of years is really important.”

But after days of mixed messages from government figures about whether office parties should take place – and who people should kiss under the mistletoe – Mr Raab revealed he will not be holding a Christmas party at the Ministry of Justice, even though it would be permitted.

The Justice Secretary said he would be having “appropriate drinks at a smaller scale” as he urged employers to show “common sense” when organising celebrations.

“The rules are very clear – people can go in and have Christmas parties. Of course employers will want to think – common sense – about how they do that,” he said.

“The Government wants people to be able to enjoy Christmas this year.

“People should feel free to go and enjoy those celebrations and every employer will think about the right way to do it and I’m the same as everybody else.”

England’s Children’s Commissioner said she would urge the PM “not to close schools” following Omicron’s emergence.

Dame Rachel de Souza said children “took a huge hit for us” in previous coronavirus lockdowns, adding that on possible future school closures she would advise the Government “not to do this, if there is any other option”.

She added: “They (children) want things back to normal, they took a huge hit for us.

“We must not close schools again.”

Lagevrio, also known as Molnupiravir, is expected to be given to patients within weeks, the Sunday Telegraph said.

Writing in the Observer, he accused rich countries of taking “a very blinkered domestic focus, lulled into thinking that the worst of the pandemic was behind us”, instead of sending more jabs overseas.