She’s said to be ‘like a teenage girl in love’ and enjoying being publicly affectionate with her new beau.

So Katie Holmes didn’t hesitate to kiss boyfriend Emilio Vitolo Jr. when the couple parted ways on a Manhattan street on Sunday after spending another afternoon together.

The 41-year-old actress – who split with Jamie Foxx a year ago – appears to be happier than ever and didn’t care who was looking as she pulled her 33-year-old boyfriend in for a smooch. 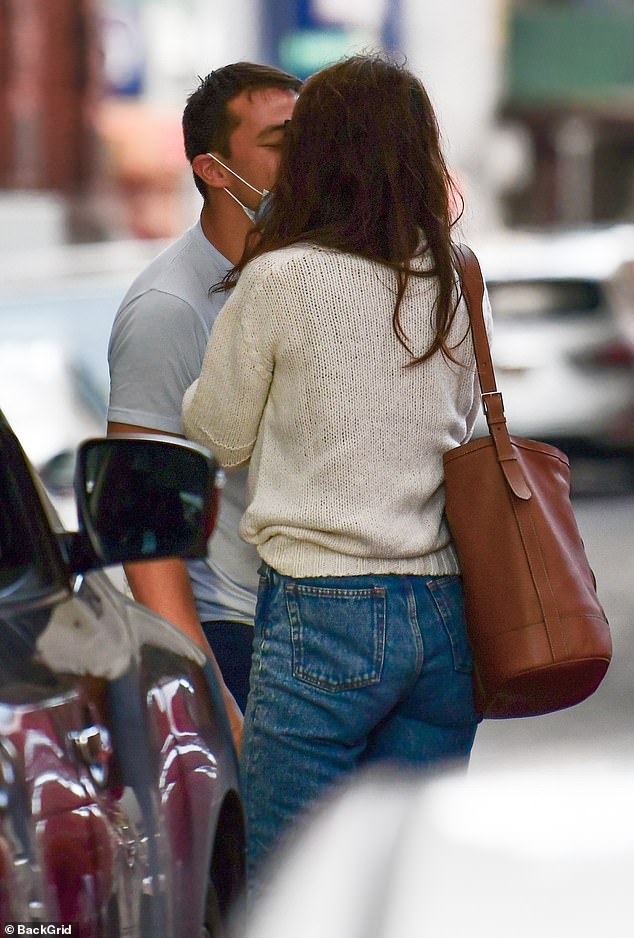 Happy in love: Katie Holmes and boyfriend Emilio Vitolo Jr. kiss on the street on Sunday after spending the afternoon together 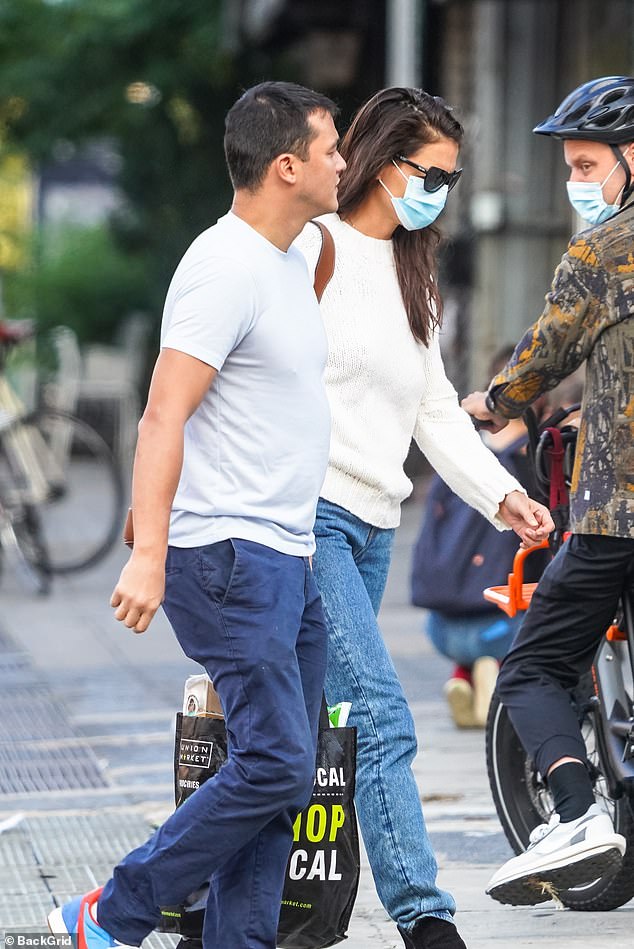 Casual Sunday: Katie, 41, and Emilio, 33, spent the afternoon together before the chef headed to work

The Dawson’s Creek alum arrived at the chef’s apartment and spent five hours there before the couple left the residence.

Emilio was then seen driving Katie back to her home and dropped her off before he walked to work to start his shift at his father’s restaurant, Emilio’s Ballato.

The day date came amid reports of Emilio’s messy split from his fiancee and claims that he broke up with his wife-to-be by text when his romance with the Batman Begins star first emerged.

Dropped off: Katie arrived in an Uber to see her new man at around lunchtime on Sunday 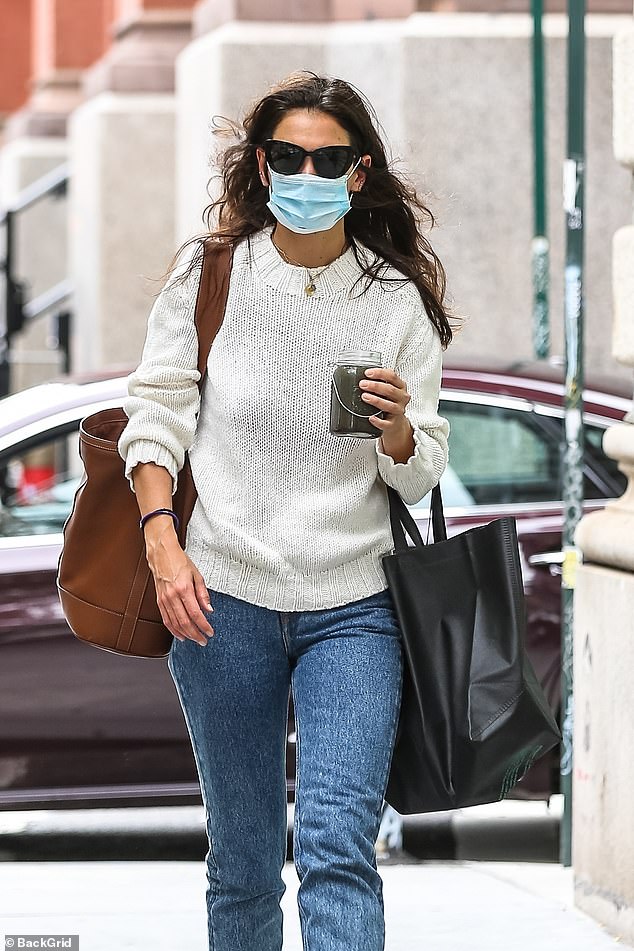 Lunch supplies? The brunette beauty carried a leather bag on one shoulder and a black tote hung off her other arm 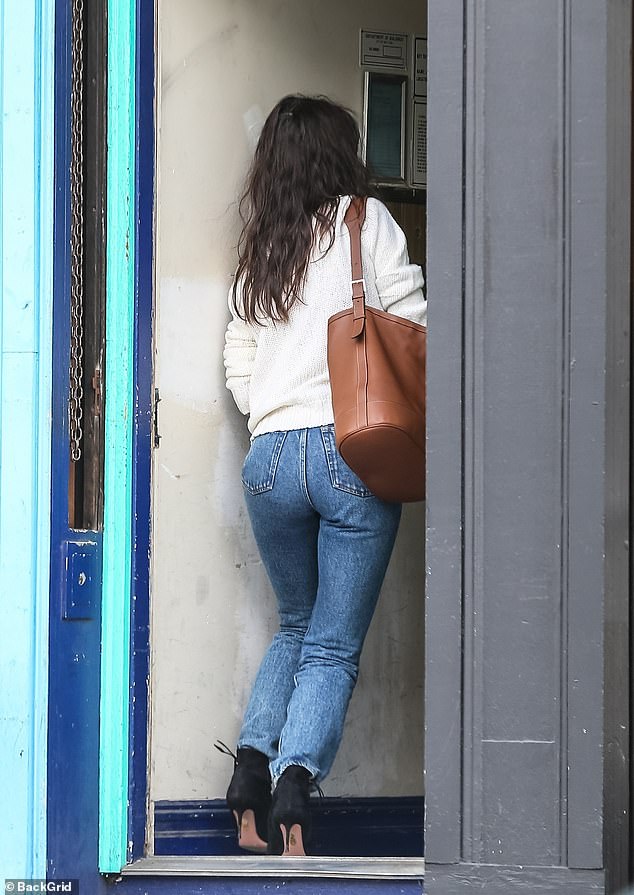 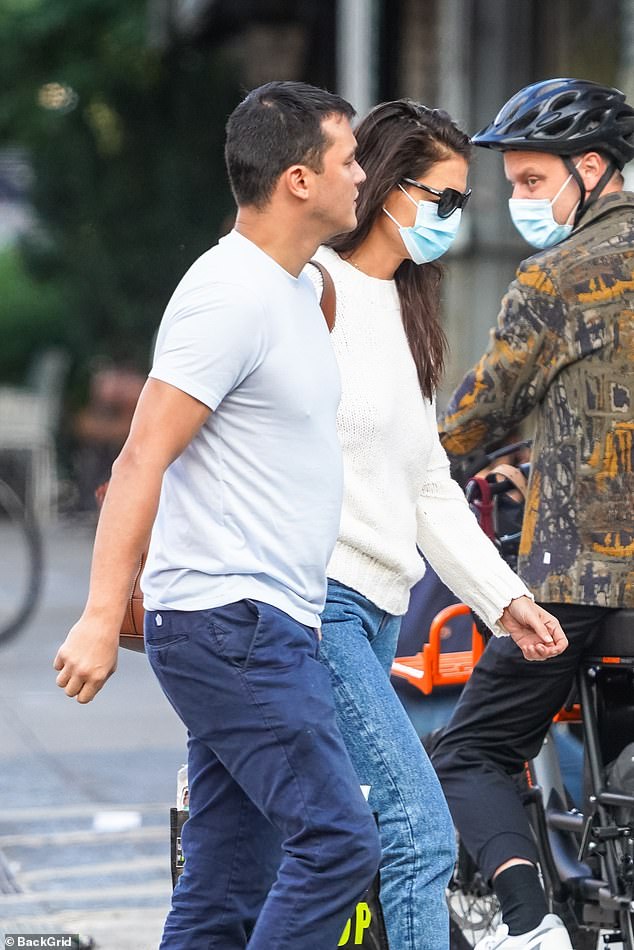 Lazy Sunday: After spending some time at Emilio’s place the couple left the building and were pictured strolling down the street together 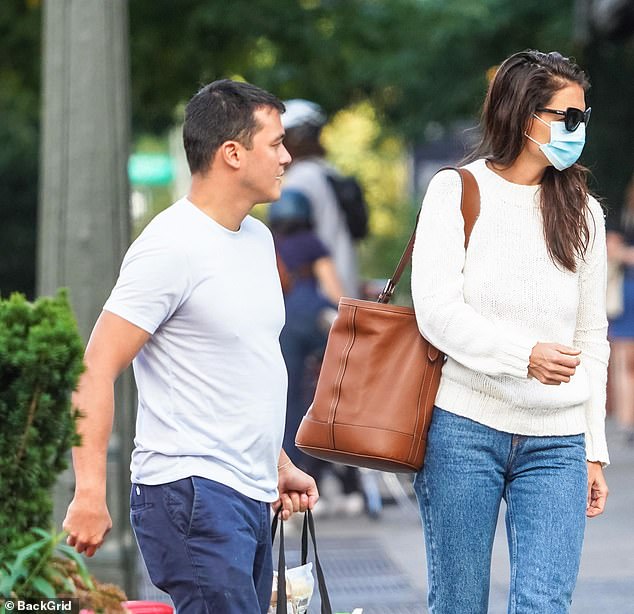 Friendship turned romantic: The duo were first pictured together two weeks ago outside the restaurant Peasant in New York but have known each other for almost a year

She was seen carrying a mason jar, which looked like a candle, into Emilio’s building around lunchtime and spent five hours there before the couple left together.

Emilio kept it casual in dark blue pants and a fitted T-shirt.

Rumors that Katie and the chef were romantically involved were first sparked when the pair were spotted outside the restaurant Peasant in New York at the start of the month.

And just days later, Dailymail.com revealed that Emilio broke up with his live-in fiancee, Rachel Emmons, 24, by text when photos of him and Katie looking affectionate were published.

The handbag designer was reportedly blindsided by the split and forced to move back home. 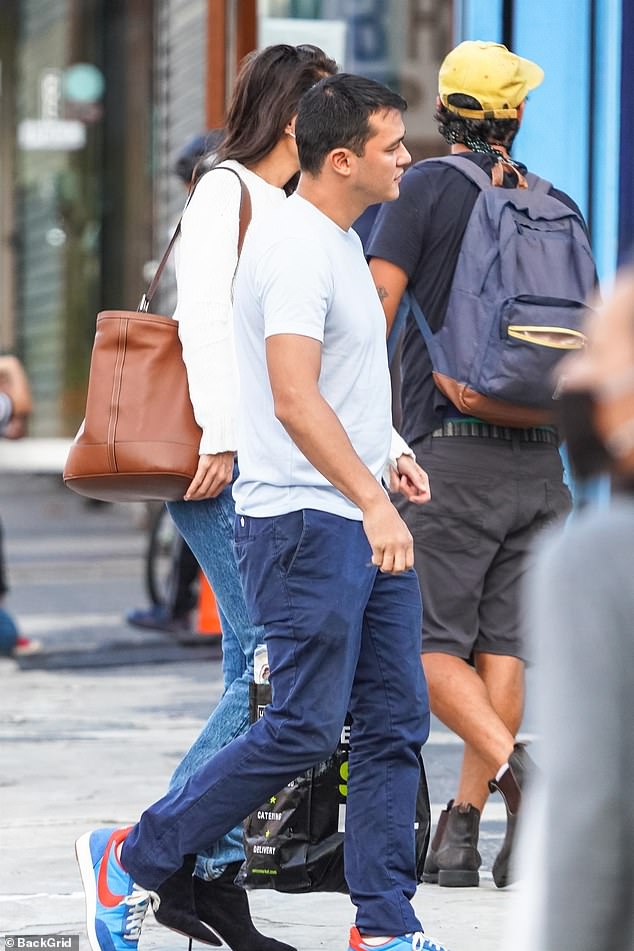 Moving on: The mother-of-one doesn’t appear to be bothered by reports that Emilio dumped his fiancee by text in recent weeks 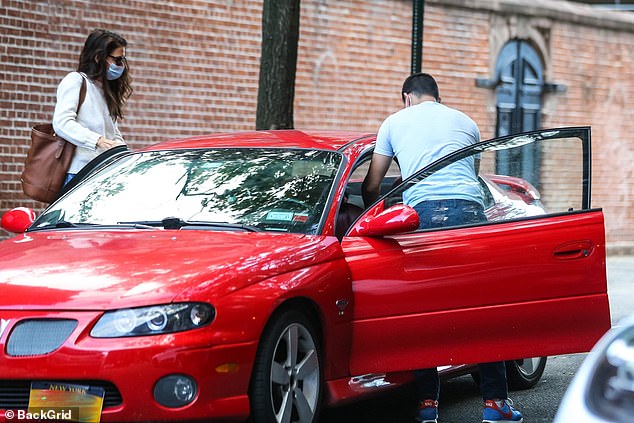 Take me home: The actress was seen getting in the passenger side of the red Pontiac GTO 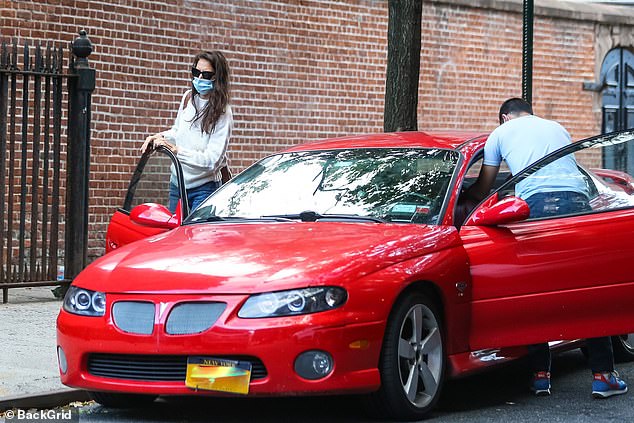 Ride: The couple’s date came to an end as Emilio had to go to work 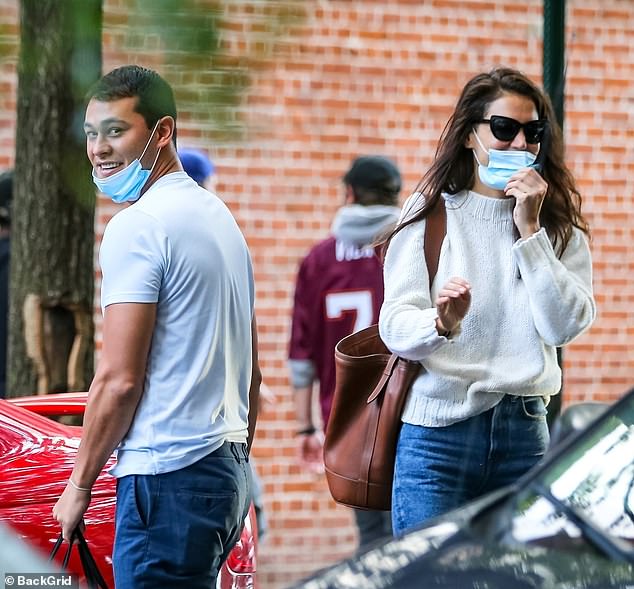 Loved up: The couple couldn’t stop grinning and didn’t seem to care who was looking 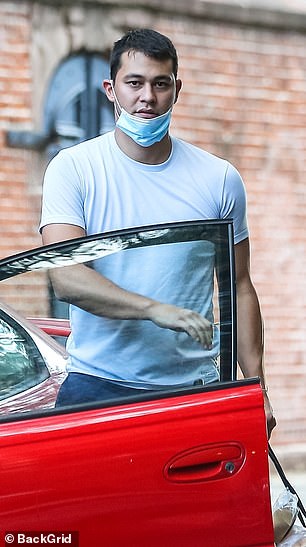 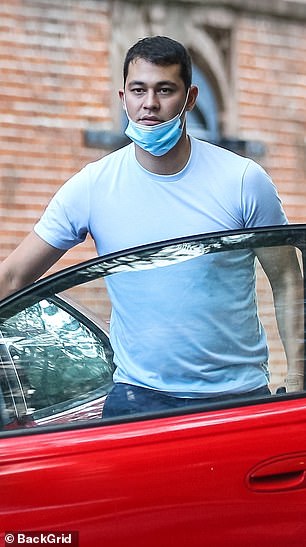 Katie and Emilio’s friendship has been growing since October 2019, and she doesn’t seem to have been bothered by his engagement.

They first met when a mutual friend introduced them, and their passions have only intensified since she returned home to New York City following time quarantining with her family in Ohio.

An insider close to the Logan Lucky star said she’s now behaving ‘like a teenage girl in love’ because Emilio is ‘openly affectionate with her, left his fiancée to be with her and gives her something [her ex-boyfriend] Jamie [Foxx] couldn’t,’ the source added. 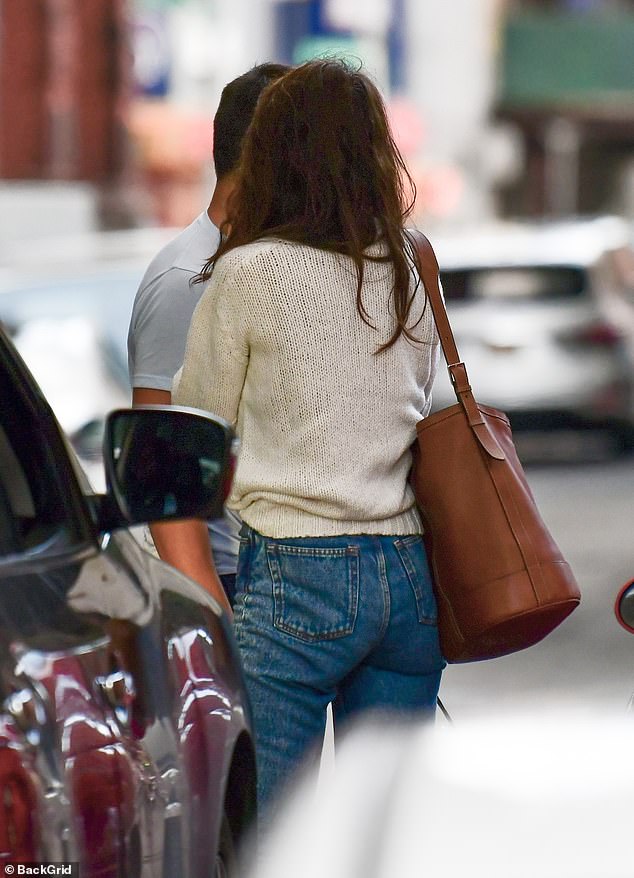 So long: The new couple stood chatting for a while before parting ways 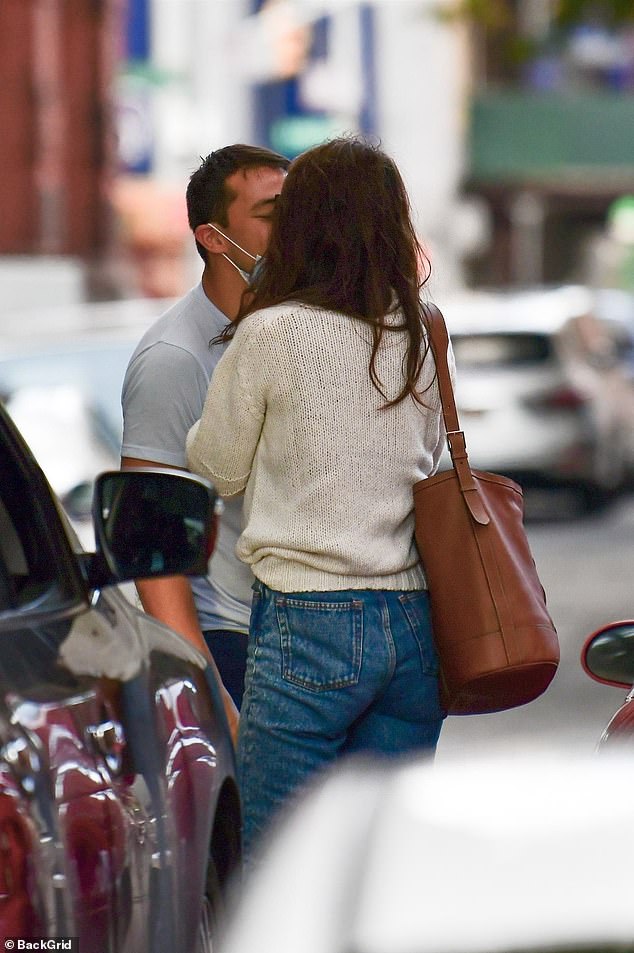 PDA: Katie appears to be enjoying being publicly affectionate with her new man

The insider said Katie had been devastated by her breakup last year with the playboy actor, who never seemed to give up his roving eye and was still too close for comfort with his baby mama.

The acting couple were first spotted together in public in 2013 when they walked hand-in-hand in Malibu, but they kept their relationship private throughout the years.

The couple split last year, just months after they took their relationship public at the Met Gala.

Katie was previously married to Hollywood star Tom Cruise and have daughter Suri together. 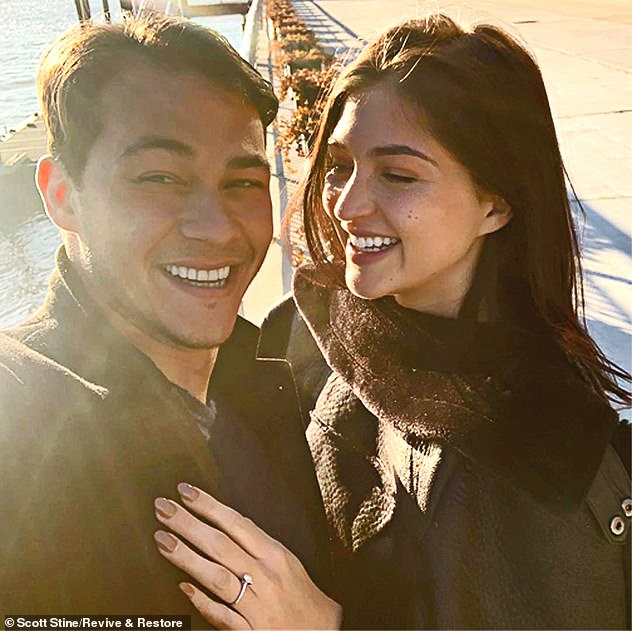 DailyMail.com revealed on Wednesday that Vitolo broke up with his live-in fiancée 24-year-old Rachel Emmons (pictured together) by text when photos of him and Holmes were published 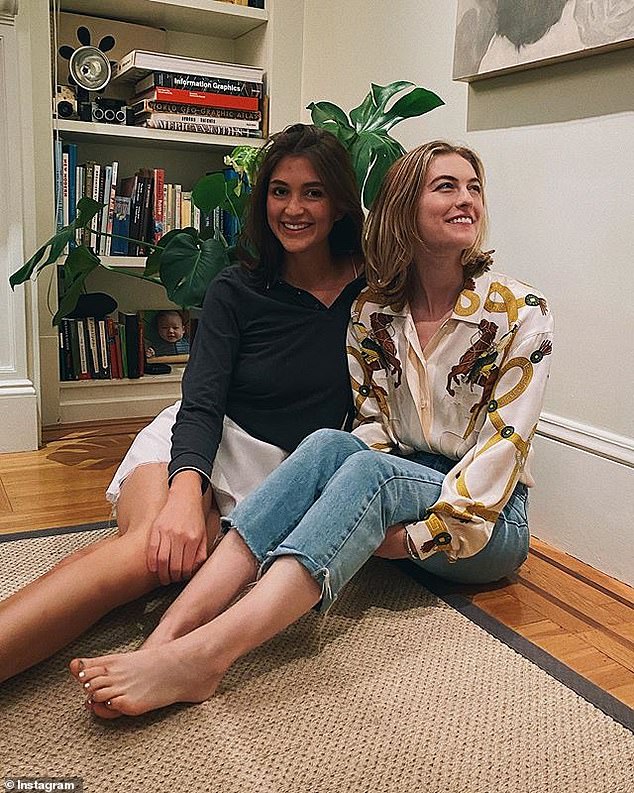 Heartbroken: Emmons, seen in this photo on Saturday, was supposedly blindsided by the split and moved back home

Hilary Duff Takes Us Inside Her Home, and Yes It's What Dreams Are Made Of

The Bachelor: Bella Varelis is caught with another man hours before finale

Checking In on The Hills Cast: See Where Lauren Conrad, Kristin Cavallari and More Stars Are Now