Justin Bieber and wife Hailey enjoyed an afternoon of rest and relaxation at a day spa on Thursday.

The couple were spotted arriving together at an luxurious salon in Beverly Hills.

The 22-year-old model looked polished in a chic blazer and PVC trousers, while her 22-year-old singer husband looked like he had just rolled out of bed in a scruffy tracksuit.

The couple wed in secret last year but have endured a difficult start married life amid Bieber’s struggle with his mental health. 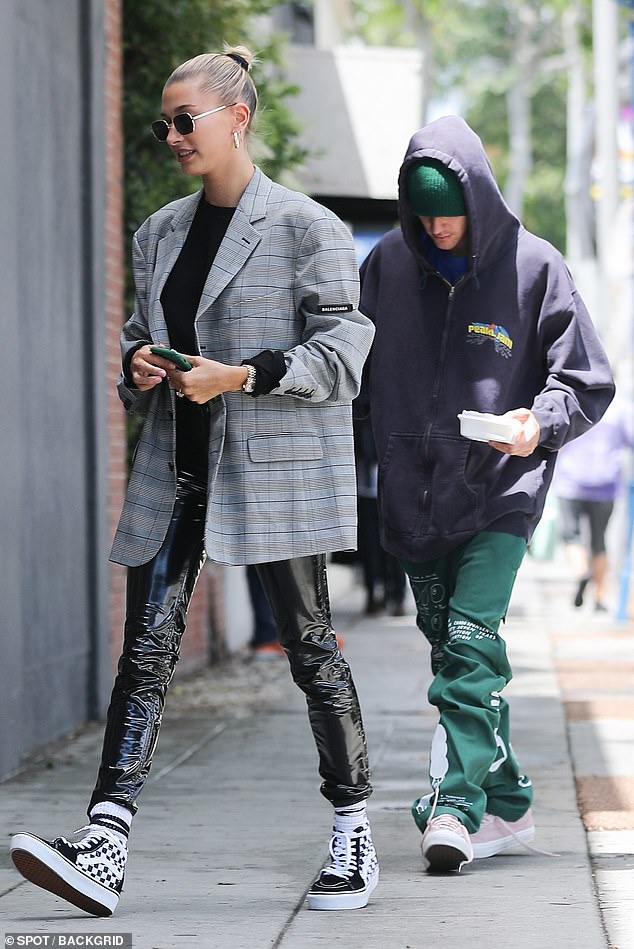 But Hailey has proved to be a devoted wife and last week took to her Instagram Story to post an adorable message aimed at her spouse.

She said that meeting him made her realise why none of her previous romances had worked out.

Hailey posted an excerpt of a poem by Ángel Lindberg Vázquez, which read: ‘When you find your one you’ll understand why the rest never got past second place.’

The beauty’s sweet post comes just days after her older sister Alaia Baldwin said Hailey and Justin were still planning on having a bigger wedding ceremony for family and friends, but have been ‘up and down’ with their plans.

She said: ‘We will see. Who knows what their plans are. They’re very up and down, so I just I’ll be there at some point in a dress, in sweats – we don’t know!’

Meanwhile, it was previously claimed the couple were postponing their wedding ceremony whilst the ‘Love Yourself’ singer works on improving his mental health.

A source said earlier this year: ‘They will still have a wedding eventually, but this is not their focus right now. They haven’t sent out any new save the dates. They will wait until Justin feels better and is excited about planning their wedding again.’

And Justin is said to be ‘very focused on getting better’ after receiving treatment for his mental health over the past few months.

‘He wants to be in a great place for his own and Hailey’s sake. He is still confident that he will get there. They seem happy about spending a few days in LA. Hailey isn’t putting any pressure on him at all. She only wants him to focus on his mental health.’

Dr. Dre's wife Nicole Young is pictured for the first time since divorce

‘I was in on the joke’: Niall Horan assures fans he wasn’t offended by puppet Dustin the Turkey