Asian junk bond investors are increasingly looking to smaller pockets of the market as a debt crisis among the biggest issuers, Chinese property developers, forces old playbooks to be rewritten.


Chinese real estate notes had long been one of the world’s most-profitable trades. But a record string of defaults has ruined appetite and caused the nation’s junk notes to tumble almost 27% in 2022. Meanwhile, a worldwide debt rout has created a game of losing less. Money managers point to high-yield securities from India and Southeast Asia as alternatives in this new era.


While those bonds carry risks of their own from vulnerability to U.S. rate hikes to depreciation in their home currencies, they’ve fallen less than regional peers this year. Indian notes have lost nearly 11% and Southeast Asian high-yield securities have shed 7.2%, compared with a 19% drop in the region’s junk debt excluding Japan.


“We believe that the shape of the Asia high-yield market will permanently change to be one with a lot less China,” said Dhiraj Bajaj, head of Asia fixed income at Lombard Odier in Singapore. Higher quality corporates and bank capital instruments from India, Southeast Asia, Australia and parts of North Asia will likely see issuance rise, he said. 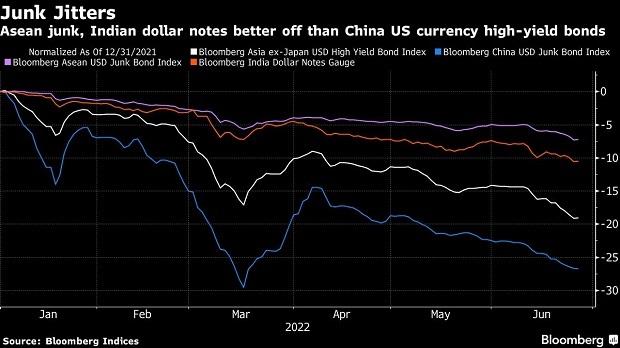 Chinese companies still sell a majority of dollar junk bonds in Asia, but their portion has decreased: they made up 61% of issues this year, compared with 76% in 2020 when China Evergrande Group’s trouble repaying its massive borrowings triggered the nation’s developer debt crisis.


That’s prompted overall Asian high-yield dollar corporate note issuance to slide 86% so far this year, an even bigger drop than for global counterparts amid a worldwide debt rout. The shrinking menu of options is also sharpening a focus on some of the more appealing prospects of parts of the market, including Indian green debt as the country seeks funding to target 50% generation capacity from non-fossil fuels by 2030.


“I expect growth from the Indian and Indonesian high-yield markets, notably Indian renewables, given the country’s ambition to triple capacity by 2030,” said Amy Kam, a senior portfolio manager at Aviva Investors Global Services Ltd. in London.


As for China, authorities there have been unveiling measures to ease stress in the credit market since March, cutting key interest rates, supporting bond sales by builders and taking stakes in some firms. But that hasn’t stopped the unprecedented wave of defaults, while some offshore bond investors have suffered more losses than local counterparts.


“The implications of the systemic default wave out of China property are grave,” said Bajaj. “The swift changes in policy, significant amounts of hidden debt by swathes of private companies, lack of debt resolution mechanisms when defaults happen, and inherent bias toward subordinating offshore bondholders won’t go unnoticed and unforgotten for perhaps a decade or two.” 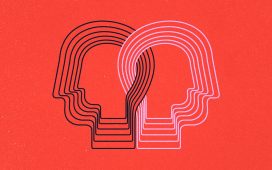 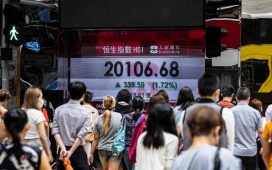 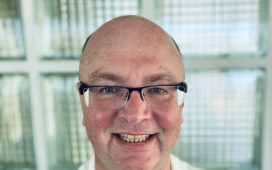