Boris Johnson ordered a third economically disastrous national lockdown for England as the UK prime minister warned that the NHS risked becoming overwhelmed by a surge in cases of the new Covid-19 strain.

In a sharp switch in position, Mr Johnson ordered the immediate closure of all primary and secondary schools until mid-February as he imposed a version of the lockdown that shut down England last March.

Mr Johnson warned the country faced a very “tough” few weeks as a vaccine is rolled out, with chief medical officers warning that hospitals could be swamped later this month without new restrictions.

“The government is once again instructing you to stay at home,” he said in a televised address. “Our hospitals are under more pressure from Covid than at any time in the pandemic.”

For the next seven weeks, people will be told not to leave their homes except for specified purposes such as essential work — including construction — or to buy food or medicines. The measures will be reviewed during the week commencing February 15. 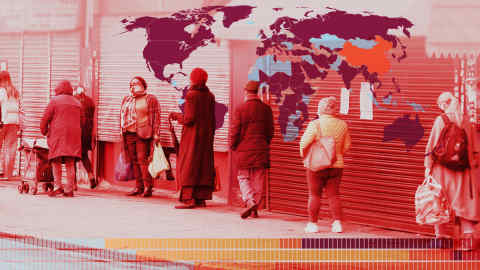 University students will be told not to return to their colleges until the middle of next month at the earliest, while GCSE and A-level exams this summer will be cancelled.

Adam Marshall, director-general of the British Chambers of Commerce, said companies would understand why Mr Johnson felt compelled to act but that they would be “baffled and disappointed” at the lack of a new support package.

Rishi Sunak, the chancellor, has a range of economic support measures in place until the spring, including the furlough scheme, but his March 3 Budget will now take place in the shadow of a continuing health emergency.

In a joint statement, the UK’s four chief medical officers said: “We are not confident that the NHS can handle a further sustained rise in cases and without further action there is a material risk of the NHS in several areas being overwhelmed over the next 21 days.”

John Edmunds, an epidemiologist at the London School of Hygiene & Tropical Medicine, said it was now “baked in” that the UK would have a death toll from Covid-19 exceeding 100,000.

There were 58,784 new cases of Covid-19 reported in the UK in the latest 24-hour period, and 407 deaths. Daily admissions of Covid-19 patients to hospitals in England surpassed the peak recorded in April, to reach a record of 3,145, according to data released on Monday.

Mr Johnson said that “now more than ever, we must pull together”, adding: “I know how tough this is, I know how frustrated you are, I know that you have had more than enough of government guidance about defeating this virus.”

He apologised to parents for closing schools, saying he had “tried everything” to keep them open. In a sign of the chaos over the government’s approach, Mr Johnson had on Sunday urged parents to send their children back to school the following day.

But the prime minister added a note of optimism, saying that he hoped all over-70s, those clinically vulnerable, frontline health and social care staff would receive the first dose of a Covid-19 vaccine by the middle of February, paving the way for a relaxation of the restrictions. 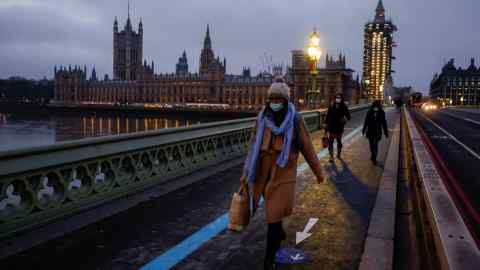 But achieving that target would require about 2m jabs a week and Mr Johnson’s optimism was heavily couched. He said the timetable would depend on things “going well” and could be derailed if another potent strain of the virus emerged.

The new measures were announced following a 30 per cent increase in Covid-19 hospital admissions in a single week. The case rate of Covid-19 in England has increased threefold since the start of December.

All non-essential shops will be closed along with pubs and restaurants, except for delivery and takeaway. Mr Johnson also banned takeaway drinks, following concerns that the virus was spreading as the result of outdoor socialising.

Travel will also be forbidden except for essential purposes. Support bubbles for childcare and adults living on their own will remain in place. Unlike the strict lockdown announced last March, playgrounds will remain open.

Parliament will be recalled to vote on the new measures on Wednesday.

The Joint Biosecurity Centre also announced that it would for the first time raise the threat level over Covid-19 to 5, the highest, which states that the UK faces the “material risk of healthcare services being overwhelmed”.

Meanwhile, Nicola Sturgeon, Scotland’s first minister, announced a lockdown and a legal stay-at-home order across the nation from midnight to control the new strain of the virus.

Scots will be allowed out only for “essential reasons” such as shopping or exercise until at least the end of January. All schools will be closed for most pupils.

Ms Sturgeon said Scotland was in a similar situation with coronavirus to London four weeks ago. Since then, infections and hospital admissions in the capital have soared.

Schools in Northern Ireland face a prolonged shutdown after an emergency meeting of the region’s devolved government to discuss new coronavirus restrictions. In a statement shortly before 10.30pm on Monday, the executive said “there will be an extended period of remote learning for schools”.

Backbench Conservative MPs are increasingly exasperated at Mr Johnson’s erratic approach to coronavirus policymaking, including some of those who owe their political success to the prime minister.

Two members of the 2019 intake said they had on Monday submitted letters of no-confidence in Mr Johnson to Graham Brady, who chairs the 1922 committee of backbench MPs that governs leadership contests. “I’m completely fed up. He just can’t lead and this can’t go on,” one said. 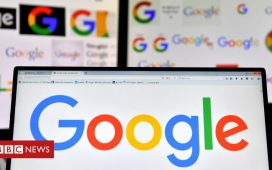 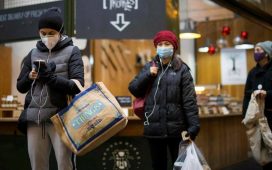 NS&I boss apologises for customer service amid rise in withdrawals 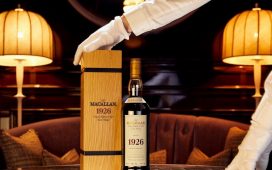 World's most expensive whisky set to break records at auction 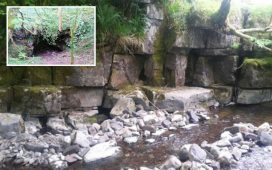