John Travolta shares rare video of daughter Ella, 20, and son Benjamin, 10, on his first Christmas without wife Kelly Preston who passed away in July

John Travolta’s longtime wife Kelly Preston passed away in July after a battle with breast cancer.

And this Christmas was the Saturday Night Live actor’s first without the Jerry Maguire actress by his side.

On Friday, the 66-year-old shared a video featuring his daughter Ella Bleu, 20, and son Benjamin, 10, at their home as he wished fans a Merry Christmas. 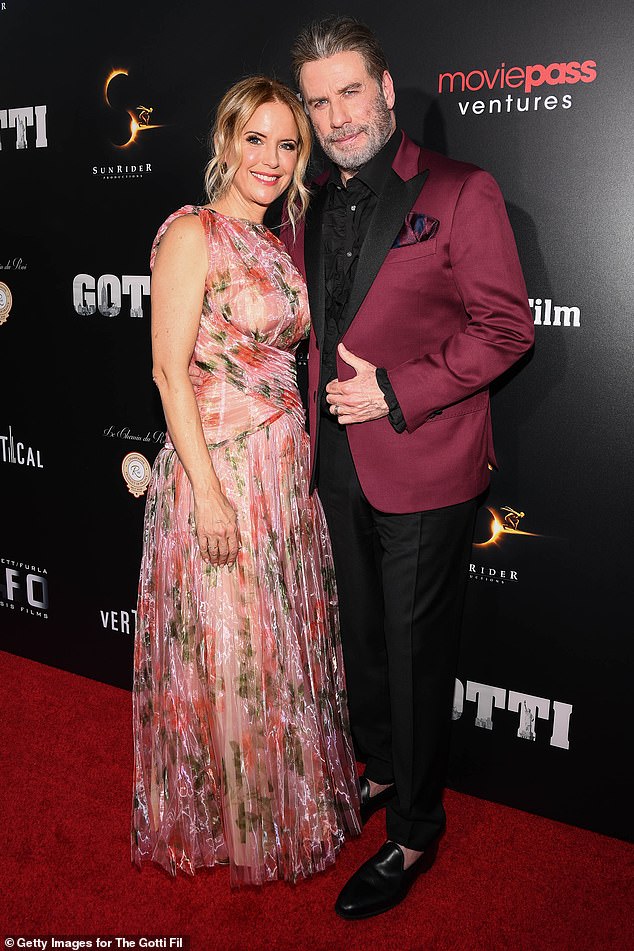 Solo now: Kelly Preston passed away in July after a long battle with cancer. And this Christmas was the Saturday Night Live actor’s first without the Jerry Maguire actress by his side; seen in 2018

‘Say merry Christmas, Ella!’ the pilot said. Ella looked pretty in black pajamas as she stood in front of the white-frosted Christmas tree while holding her phone.

There were several packages behind her as well as a black luggage set.  Benjamin was shirtless as he sat in a green chair enjoying a cookie.

‘Merry Christmas from the Travolta family!’ the Face/Off star wrote in his Instagram caption.

Also not in the video was his son Jett who passed away in 2009 at the age of 16 after he suffered a seizure and hit his head in a bathroom.

Kelly’s passing was a shock to fans as she had kept her health struggles a secret. 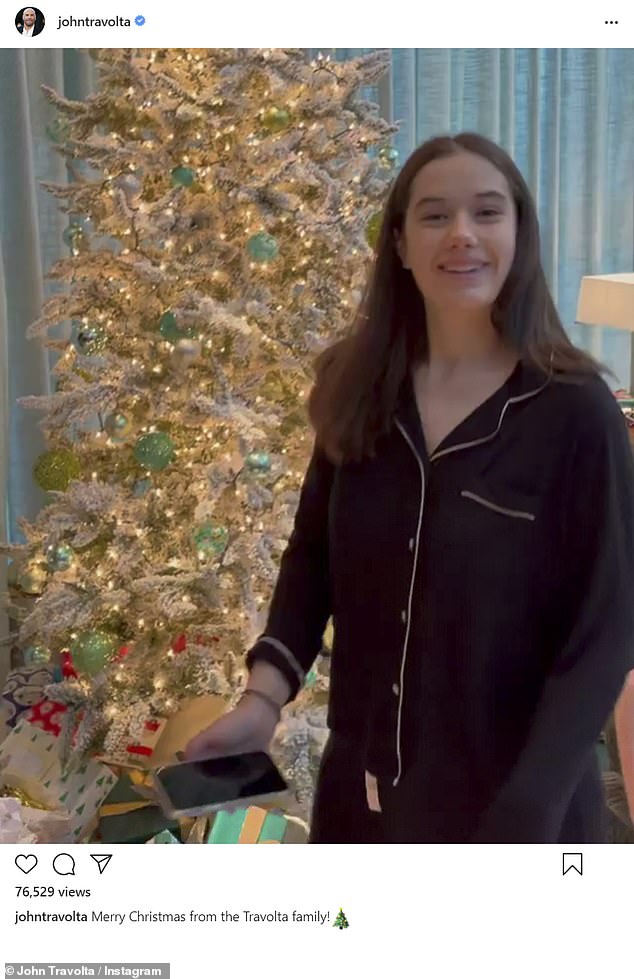 The little ones: On Friday, the 66-year-old actor, 66, shared a video featuring his daughter Ella Bleu, 20, and son Benjamin, 10, as he wishes fans a Merry Christmas 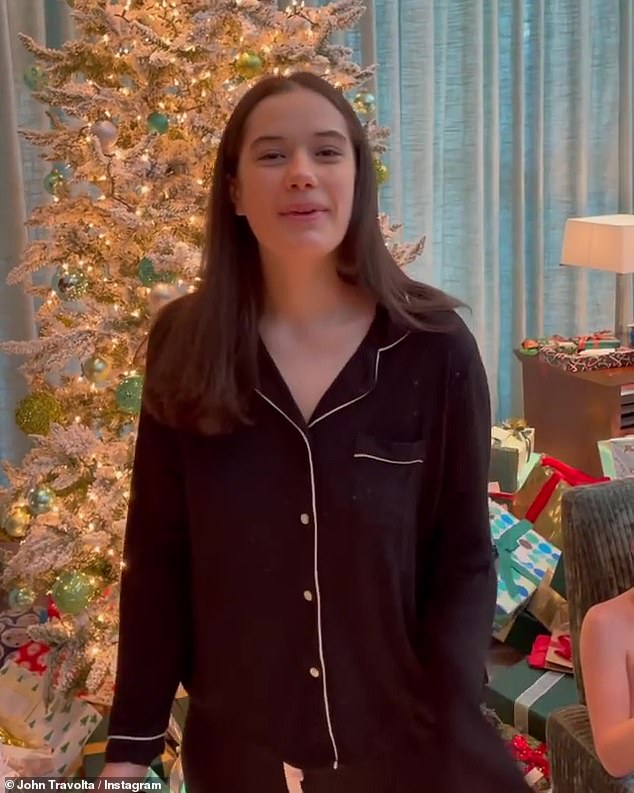 Ready to open presents: ‘Say merry Christmas, Ella!’ he said. Ella looked pretty in black pajamas as she stood in front of the white-frosted Christmas tree while holding her phone

A family representative told People magazine, ‘On the morning of July 12, 2020, Kelly Preston, adored wife and mother, passed away following a two-year battle with breast cancer.’

‘Choosing to keep her fight private, she had been undergoing medical treatment for some time, supported by her closest family and friends,’ the family rep said. ‘She was a bright, beautiful and loving soul who cared deeply about others and who brought life to everything she touched. Her family asks for your understanding of their need for privacy at this time.’

Travolta and Preston were married for 29 years before her death in July.

A good snack: His son was eating a cookie as he relaxed in a green corduroy chair 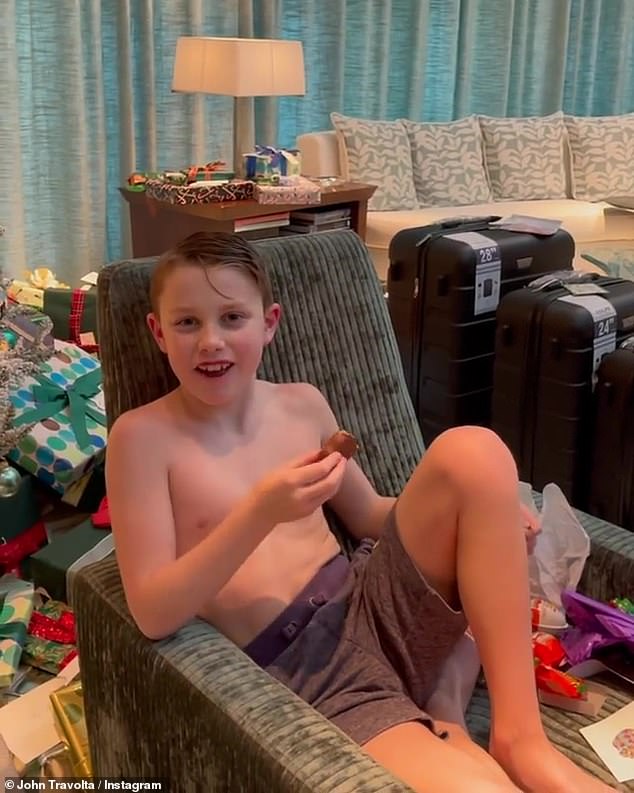 ‘It is with a very heavy heart that I inform you that my beautiful wife Kelly has lost her two-year battle with breast cancer. She fought a courageous fight with the love and support of so many,’ he wrote on Instagram.

John showed off his shaved head and sported a black turtleneck while addressing his three million followers on social media.

‘I just wanted to take this moment to thank each and every one of you for supporting me in such an incredible way this year,’ he said. ‘Happy Thanksgiving and always love.’ 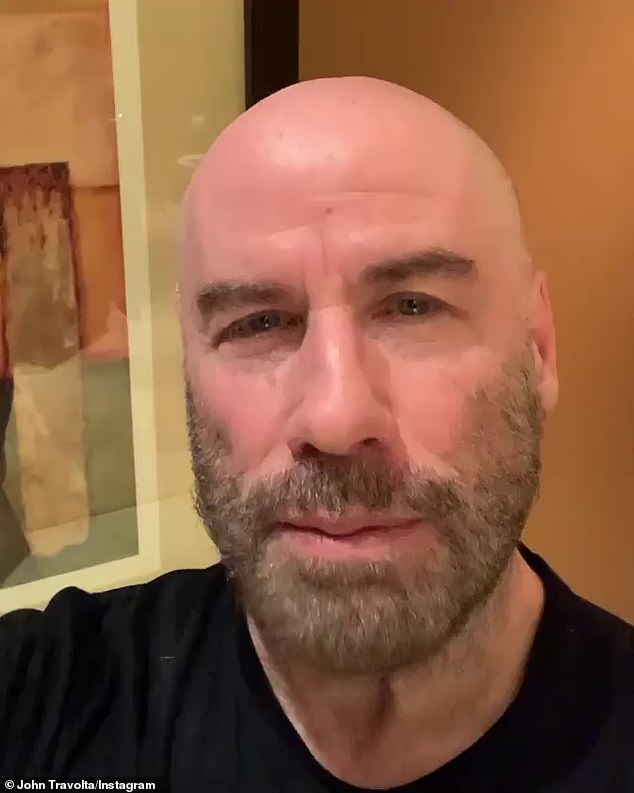 Blessed: Travolta was overwhelmed with gratitude as he took a moment to say hello to his fans on Instagram on Thanksgiving Day 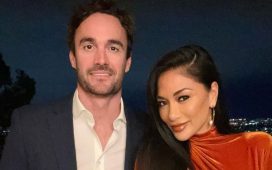 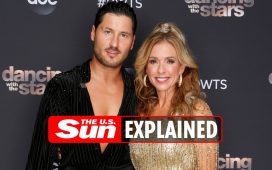 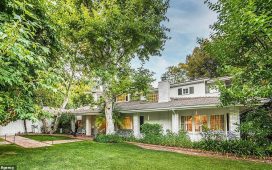 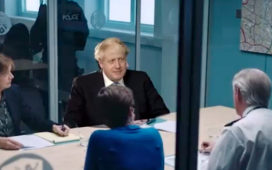 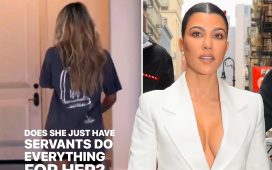