Jo Johnson on Theresa May’s Brexit plans: Ministers must look deep in their souls and ask if they can support this 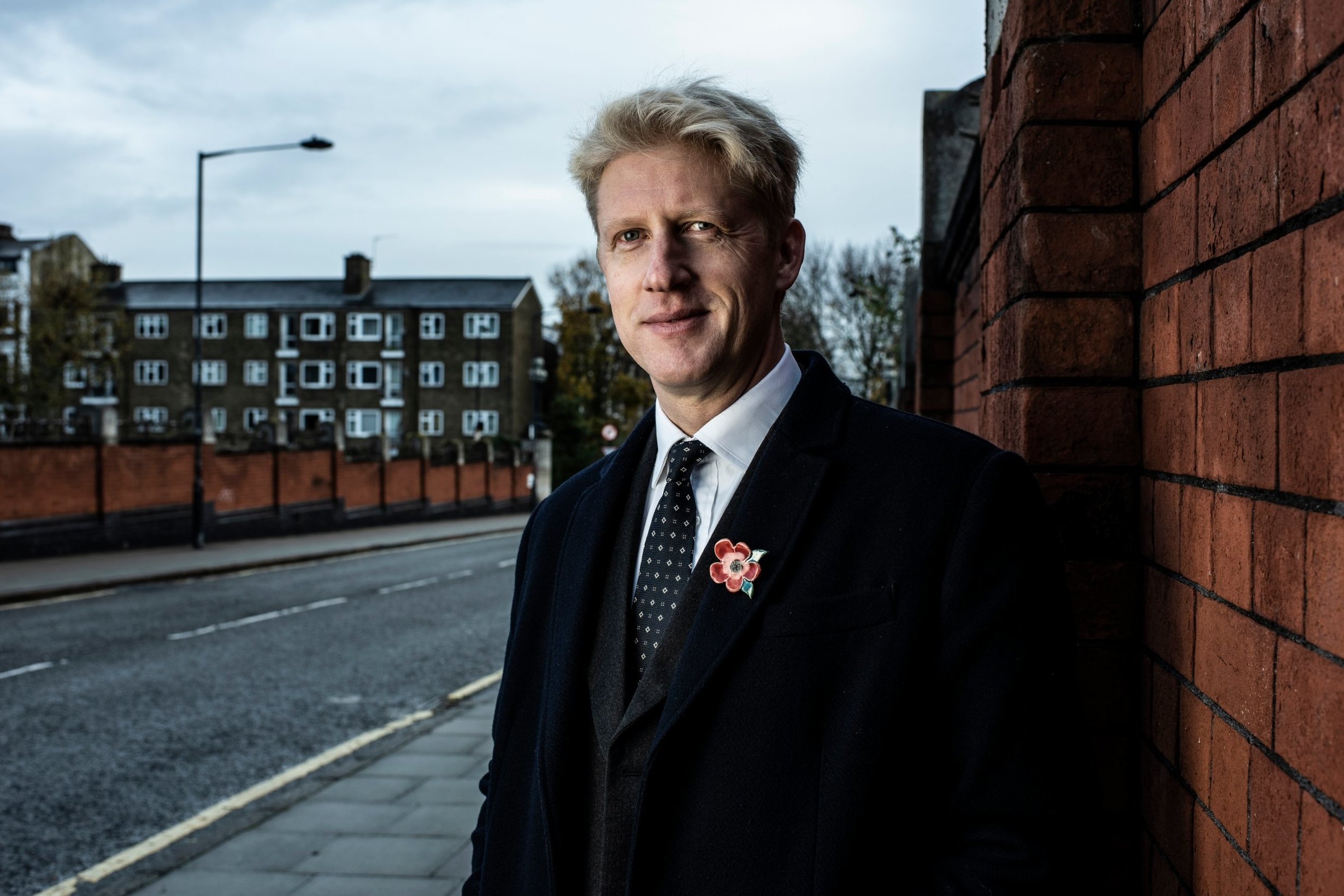 Jo Johnson is nervous. His hands tremble slightly as we pull out chairs to sit down under the awning of a street café in Orpington. This Johnson rarely thrusts himself into the spotlight so given he’s dominated the weekend news the nervousness is understandable. This is the shy, considered brother, the brainy one you’ll hear described in Westminster as “diligent”, “honest” and “decent”.

But the ripple effect of his resignation as Transport Minister on Friday over what he describes today as “the con” of Theresa May’s Brexit deal — a “fake Brexit”, “a rout”, “a calculated deceit of the British people” — could mean it’s this quiet Johnson that halts the march out of Europe with an “emperor has no clothes” deal. He has called for another referendum, a People’s Vote.

And because Jo Johnson couldn’t look less like a pig in shit with the heat of the media gaze upon him, there is no sense that any of this is for personal political gain. It feels to be what he says it is: the moment at which he could no longer go on in government “as if this was normal”, because “this is not normal, what we are being asked to agree,” he says. “I reached my limit. Whether other colleagues have a higher pain threshold, we will find out.”

Indeed we will. Perhaps even this week: Theresa May is expected to take her deal to her Cabinet in the next couple of days. Johnson urges colleagues “to look deep in their consciences and ask whether in five years’ time they will want to be associated with this decision.”

Of course it’s impossible to ignore the symmetry between Jo Johnson’s stand and that of his brother Boris, the former Foreign Secretary. Of the many things that set them apart (they are, “opposites in every conceivable way” some argue) is their stance on Brexit. While Boris was an ardent Brexiter, spearheading the Leave campaign, Jo was fervently Remain.

Did he talk to Boris before resigning? “Of course. We talk, as any brothers, or as most brothers do, particularly when you are involved in politics.” Did he show his brother the letter he wrote to the Prime Minister in advance? “No. Absolutely not.”

He makes clear the fraternal relationship is a distraction. The Miliband comparison has occurred to him and the notion that his stand today would be seen as part of a Johnson family psychodrama is “very frustrating.”

“I wish it weren’t that way. What is striking is that this issue has united us in the sense that we are both in strong agreement that this [deal] is an appalling basis for us to leave the EU. We are being presented with a ridiculous choice: ‘my way or the highway’ vassalage with the Prime Minister’s deal, or the chaos of ‘no deal’.”

Does he sense any other ministers will follow his example this week? “You can’t predict MPs behaviour,” he says.


With him today is Tony Owen, chairman of his constituency Conservative Association. They’ve just returned from a Remembrance service and Johnson wears a long black coat with poppy made from pottery. Owen says proudly that in 2010 they selected Johnson, “over Sajid Javid.” Johnson looks momentarily confused.

“Jo has done the right thing,” Owen continues. “I read his write up on the BBC website and I agreed with everything – right up until the bit about the second referendum.” This is significant because Orpington is Leave, even voting Ukip in the last European elections. And now, “Jo has reunited the Tory party,” Owen says. “Whether you are an arch Remainer or arch Brexiteer, everyone is agreed: the deal is rubbish.” As if on cue a pretty young constituent rushes over to Johnson, “just to thank you for your integrity”.

Support from across the party — including Cabinet — has been “overwhelming,” Johnson says. He’s been flooded by texts and Twitter messages. Nearly two million watched his resignation video. “That sounds like politician speak for just trying to find external endorsement,” he acknowledges. “But really it’s been mind-blowing. The mood is shifting. There’s barely a hostile email or communication.”

So who sent the hostile few? “Well, they are few and far between,” he stammers. Are they from Number Ten? He ignores the question.

What about like-minded anti-Brexit Labour MPs? Has he been talking to them? “Not directly, no.”

Certainly, though, he has tapped into the feeling of “madness” within Westminster, where a sense of entrenched paralysis has persisted for months. Johnson won’t identify the exact moment he snapped; just that he’d initially got behind the referendum result and wanted to give Theresa May “the maximum space to negotiate the best possible deal.” But by the summer, when the Chequers proposals were published, “I was concerned. But I didn’t want to speak out too soon so I couldn’t be accused of tying her hands or limiting her room for manoeuvre.”

Finally he went to see the chief whip last Friday. “I had a long conversation with Julian Smith, who I respect highly,” he says. But why not wait until the deal was on the table before resigning? Johnson says draft agreements are already circulating and “they are broadly as we’ve all understood them to be. We are now at the stage of dotting the Is and crossing the Ts: this is the deal.”

He felt if didn’t speak up now, “my ability to make my voice heard once the cacophony of the Government’s spin machine starts would’ve been very much reduced.” He cites the memo leaked last week that revealed the extent of Theresa May’s plans to sell her deal at all costs.

What angers Johnson most is that it bears no resemblance to anything promised by the word ‘Brexit’: “It’s clearly not Brexit,” he says. “The Government has boxed itself in by trying to codge together this weird fake Brexit in the hope of committing people to somehow delivering on the referendum result. It keeps repeating that [phrase] and  it’s obviously a  nonsense.

More than that he is furious that the Prime Minister seeks to compare her deal with no deal to make it look favourable, rather than comparing it with remaining in the EU. This, he says, is “a gross abuse of civil service impartiality. The reason they can’t look us in the eye is because they know this [deal] will leave us worse off and with less  control.”

I press him on whether he would like the Prime Minister to be replaced. “This isn’t for me about leadership change.”

OK. But has he written a letter to the chairman of the backbench 1922 Committee, Sir Graham Brady, saying he has lost confidence in Theresa May as leader of the Tory party?

He laughs. I ask again. He laughs again. But have you written a letter? I persist. “For me this is not about leadership,” he repeats. OK, you’re not going to answer that, I say. He laughs again.

Johnson was the youngest of the four Johnson children — including Rachel, a writer and columnist, and Leo, a filmmaker — Boris, the eldest. Much of their childhood was in Somerset — family photographs show bucolic scenes, the Johnsons all ruddy-faced with that white hair. Academic attainment and wit was prized and all four attended Oxbridge.

Their ever-present father, Stanley —often found by Boris’s side, but pictured accompanying Jo to the Today programme on Saturday  — was a Conservative MEP. Their mother, Charlotte Johnson Wahl, an artist, is far less  conspicuous.

Jo grew up in Brussels, while his father worked for the European Commission. When he was very young, his mother – devastated by Stanley’s philandering — spent eight months in the Maudsley. “It was a very difficult period,” says Jo. “But she’s well now.” And he’s proud of her — telling me about an exhibition of her work at the ICA called Minding Too Much, which “really shows how she responded to her mental health issues through he painting. It was brilliant. They are really powerful pictures.”

He followed his brothers to Eton, which was, “mostly” enjoyable. “By the last year I’d already got into university. I remember the headmaster calling me in and saying, ‘the salt seems to have somewhat lost its savour for you.’ That phrase has stuck with me.”

After Balliol he went to university in Brussels and then to Insead Business school outside Paris, and later he was posted to Paris (and then India) for the Financial Times.

“I have spent more time thinking about European issues than even I can imagine – so many years thinking about Britain and the way our influence around the world was amplified through the European Union. I thought deeply about these issues for many years and it pains me terribly that we’re about to do something that is going to be such a disappointment.”