JCB, the UK manufacturer of the ubiquitous yellow construction diggers, has warned that a crisis in India’s banking sector is hitting demand in its biggest market.

The weakness in India is part of a slowdown spanning several emerging markets, including the Middle East, Turkey and Latin America, with the exception of Brazil, JCB said on Monday as the manufacturer released record results for 2018.

India, where JCB plans to open a new £65m factory in Gujarat next year, is facing a temporary squeeze on funds for construction projects, chief executive Graeme Macdonald said.

“In the short-term, there’s a liquidity issue with both the banks and non-banking financial institutions,” he said. “My view is next year [the Indian market] will definitely bounce back.”

While the trade war between China and the US has weighed on the confidence of contractors and customers, Mr Macdonald said it was not having a direct impact. “Overall, the market is flat year-on-year on an aggregate level,” Mr Macdonald said. “We’re probably entering into a period of trough. How deep that goes, I’m not sure.”

JCB employs some 15,000 people worldwide, just under half of which is in the UK, where it is one of the largest privately-owned companies. The manufacturer clocked up a 31 per increase in earnings last year to £447m before interest, tax, depreciation and amortisation, as revenues jumped more than one-fifth to £4.1bn.

It came as the global market for construction equipment, dominated by the likes of Caterpillar and Japan’s Komatsu, topped 1 million unit sales to reach an all-time high. JCB registered machine sales of more than 96,000.

READ  Reality Check: What are the tariffs on trade with Africa?

The consultancy Off-Highway Research has forecast a 3 per cent contraction this year in global unit sales of construction equipment, which includes industrial forklifts, excavators and wheel loaders, followed by a 7 per cent fall in 2020.

Chris Sleight, managing director of the consultancy, pointed to the beginning of a cyclical downturn in the industry.

“At the moment it does seem to be gentle,” he said. “There’s been very steep growth in global equipment sales in 2017 and 2018. The industry reached the peak of the cycle probably last year. The market is down . . . but in the longer-term, that’s still a very good volume.” 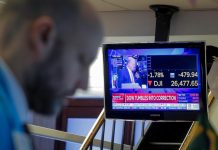