The pair arrived separately, with Emperor Naruhito in the same horse drawn cart his father, the former Emperor Akihito, used 29 years before him.

Empress Masako arrived to the extensive temple complex in a vehicle due to her horse allergy.

The couple prayed at the Geku outer shrine which is dedicated to the goddess of clothing, food and housing, in order to ‘report to the gods’ that the rites had been completed. 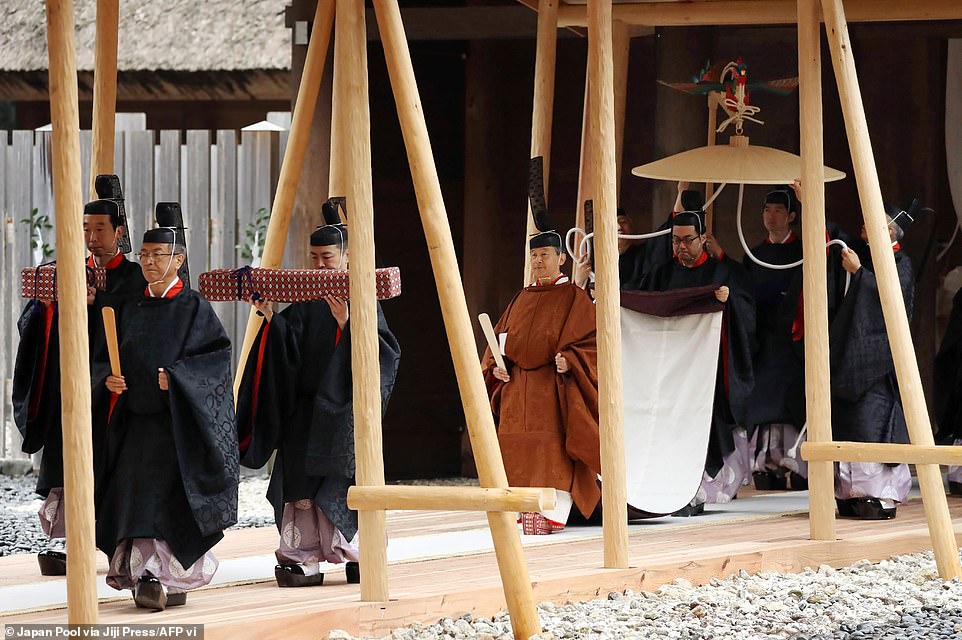 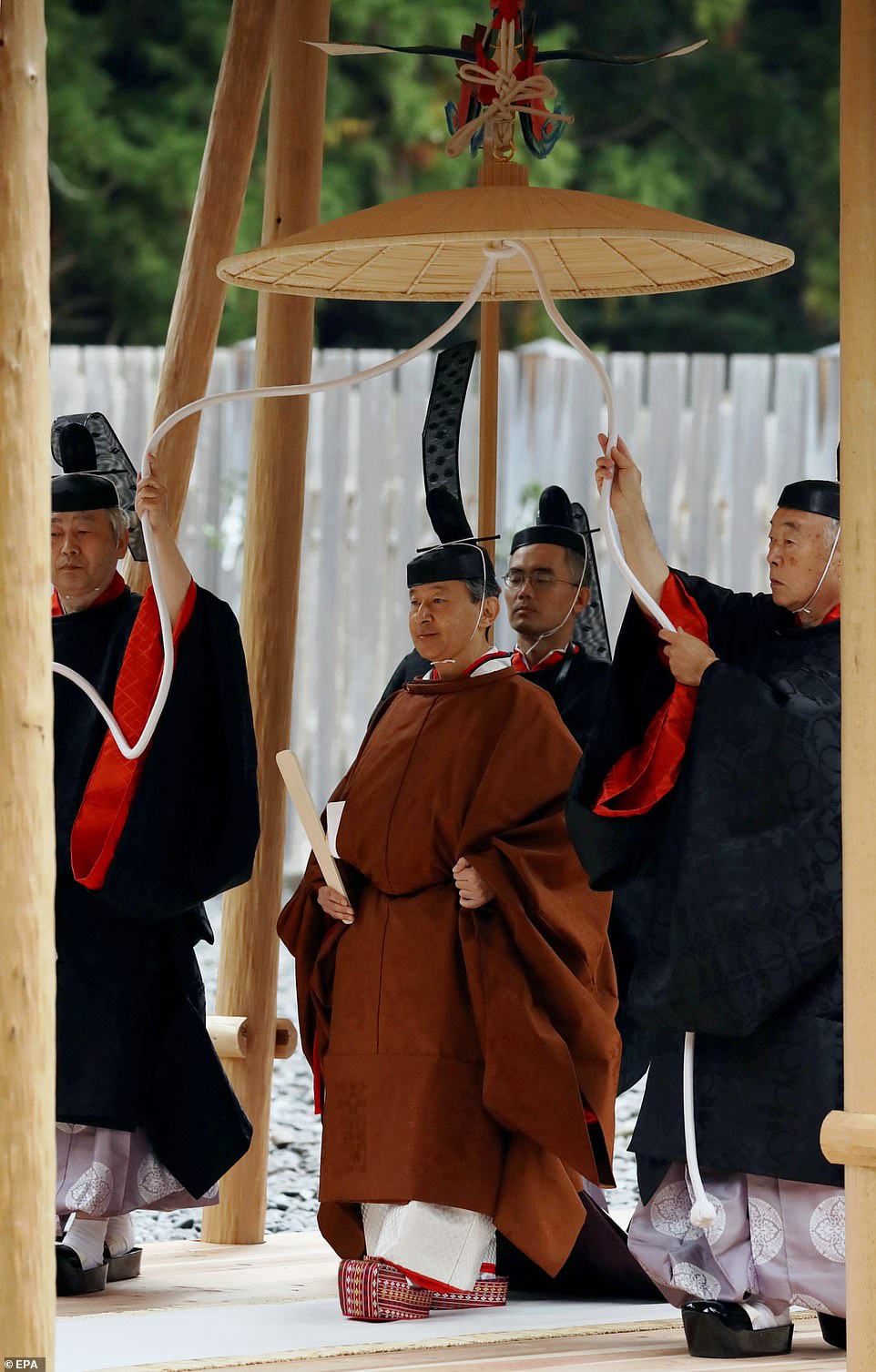 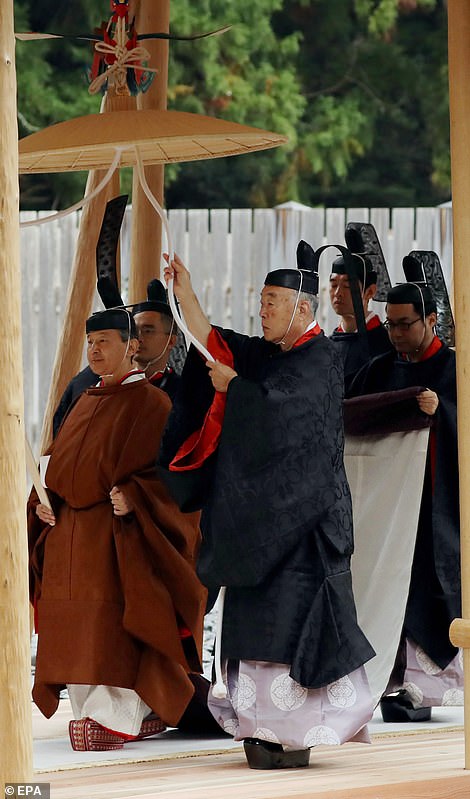 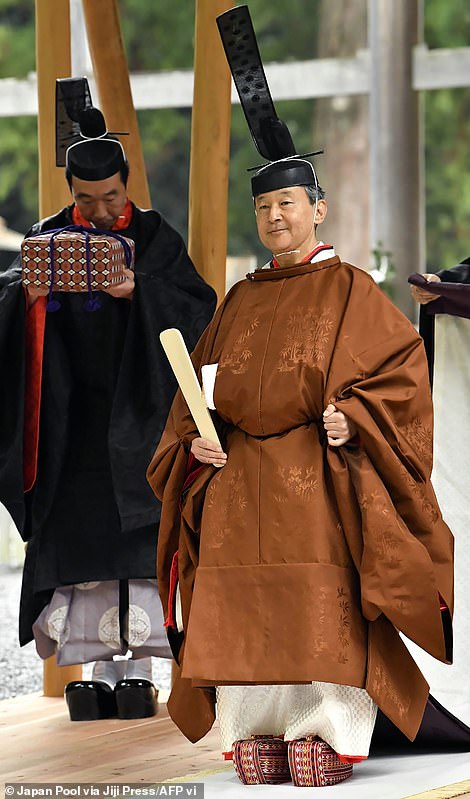 Naruhito ascended the Chrysanthemum Throne on 01 May 2019 after his father, Emperor Emeritus Akihito, abdicated on 30 April 2019. Naruhito was officially proclaimed Emperor of Japan on 22 October 2019

Emperor Naruhitu was dressed in a traditional Korozen no goho, a burnt umber coloured robe while the empress wore a court kimono.

The rites completed by the emperor since his ascent to the Chrysanthemum Throne on May 1 include announcing his enthronement to the international audience, which he did in October at the ‘Sokuirei Seiden no gi’ ceremony.

He also carried out the ‘Daijosai’ Great Thanksgiving rite, offering harvests to gods.

Tomorrow the pair will visit the shrine of the sun goddess, Amaterasu, supposedly related to the Imperial family, before returning home to Toyko.

Next Tuesday the couple plan to travel to Nara and Kyoto to visit past emperors mausoleums for three days. 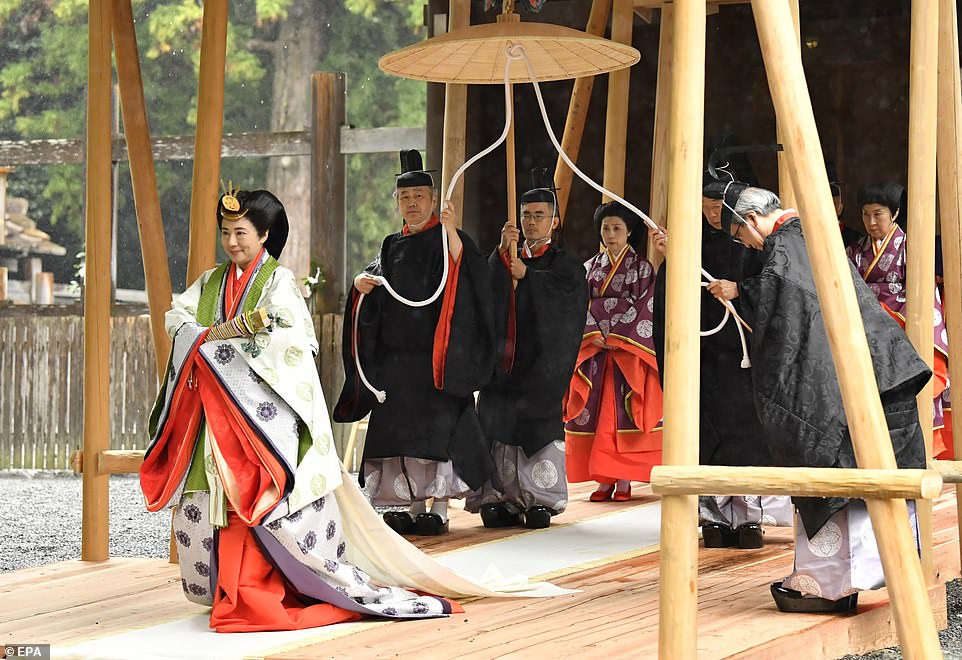 Tomorrow the pair will visit the shrine of the sun goddess, Amaterasu, an inner shrine 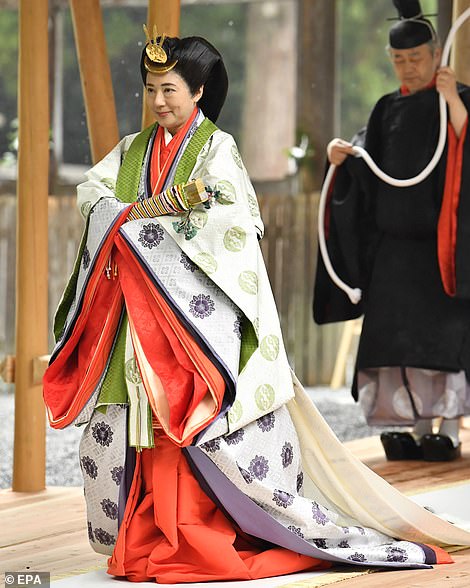 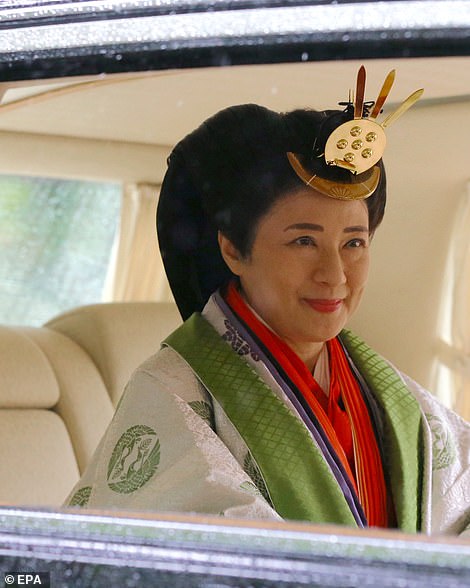 Japan’s Empress Masako (left) attends a ritual at the Ise Grand Shrine of Geku with Emperor Naruhito (not pictured), in Ise, Mie Prefecture, Japan, 22 November 2019. Empress Masako arrived separately to the emperor in a vehicle due to her allergy to horses

Japanese Emperor Naruhito formally proclaimed his ascendancy to the throne on October 22 in a centuries-old ceremony attended by dignitaries from more than 180 countries, pledging to fulfil his duty as a symbol of the state.

Naruhito became emperor and his wife Masako became empress on May 1 in a brief ceremony, but October’s ‘Sokui no Rei’ was a more elaborate ritual at the royal palace in which he officially announced his change in status to the world.

‘I swear that I will act according to the constitution and fulfil my responsibility as the symbol of the state and of the unity of the people,’ the 59-year-old declared, his voice slightly hoarse, in front of about 2,000 guests, including Britain’s Prince Charles.

Naruhito is the first Japanese emperor born after World War Two and acceded to the throne when his father, Akihito, became the first Japanese monarch to abdicate in two centuries after worrying that advancing age might make it hard to perform official duties. He is 85. 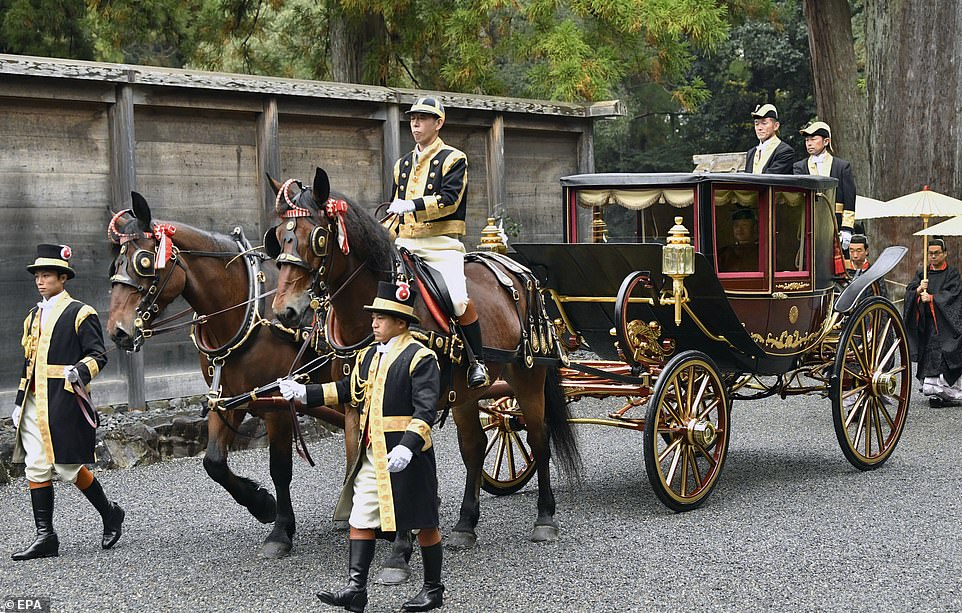 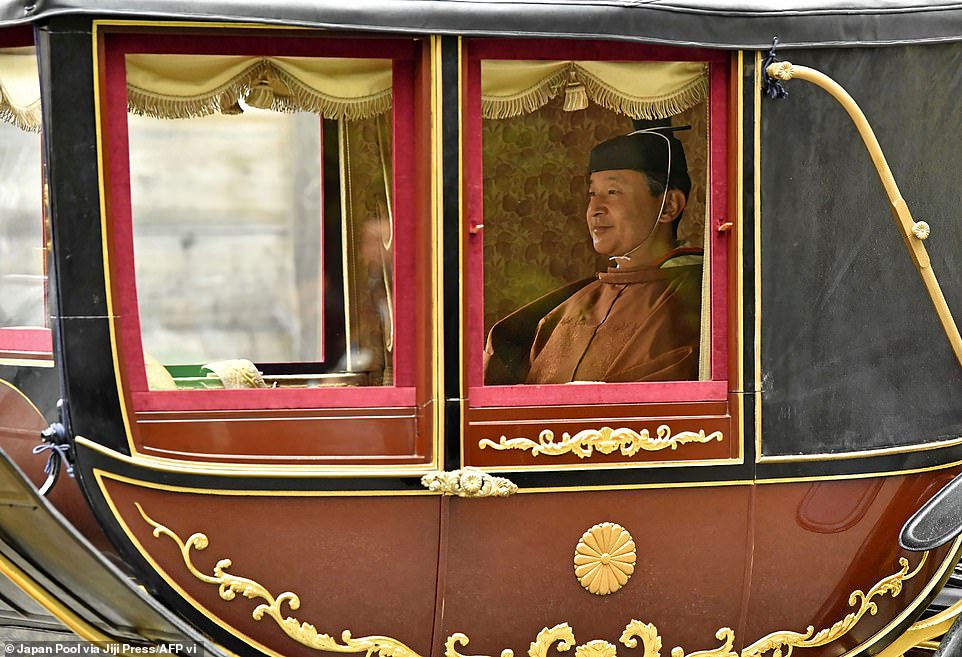 Japan’s Emperor Naruhito sits in a carriage on his way to visit the outer shrine of the Ise Jingu Shrine in Ise, Mie Prefecture on November 22, 2019 to report the completion of major rites of his enthronement 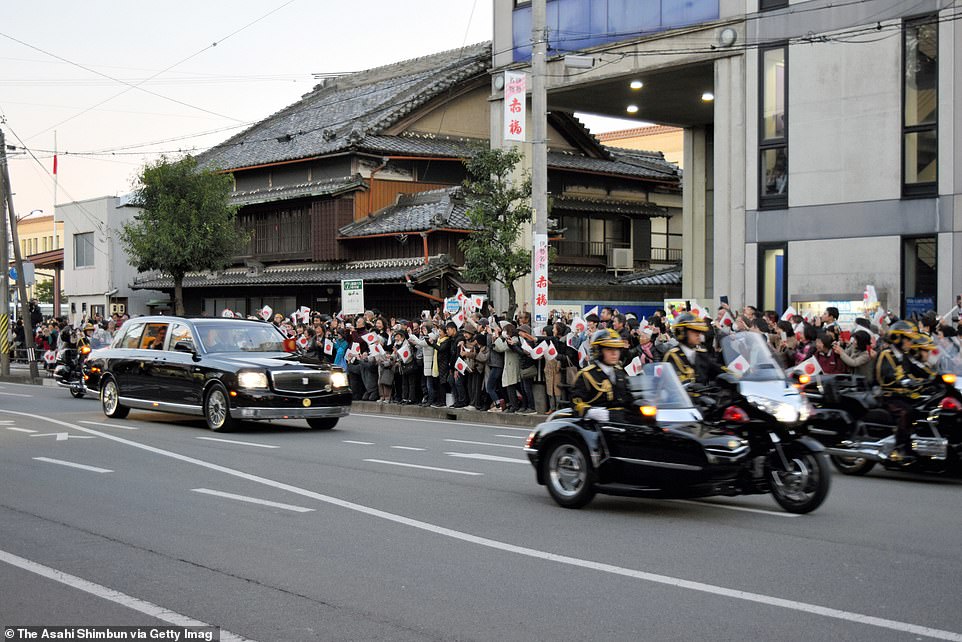 A car carrying Emperor Naruhito and Empress Masako runs toward the Ise Shrine on November 21, 2019 in Ise, Japan. The pair arrived to the location the evening before the ceremony 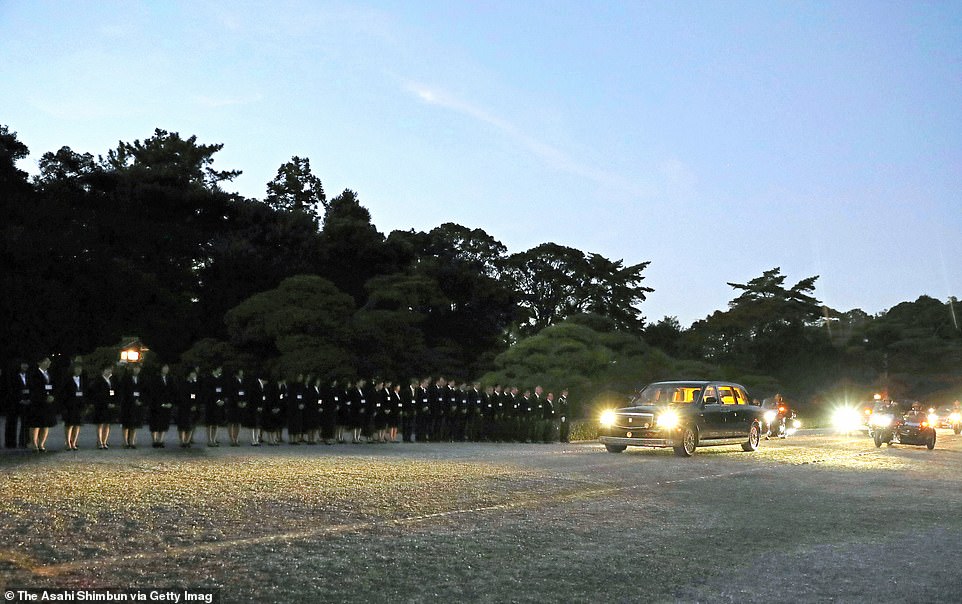 Emperor Naruhito and Empress Masako are seen on arrival to the Ise Shrine on November 21, 2019 in Ise, Mie, Japan 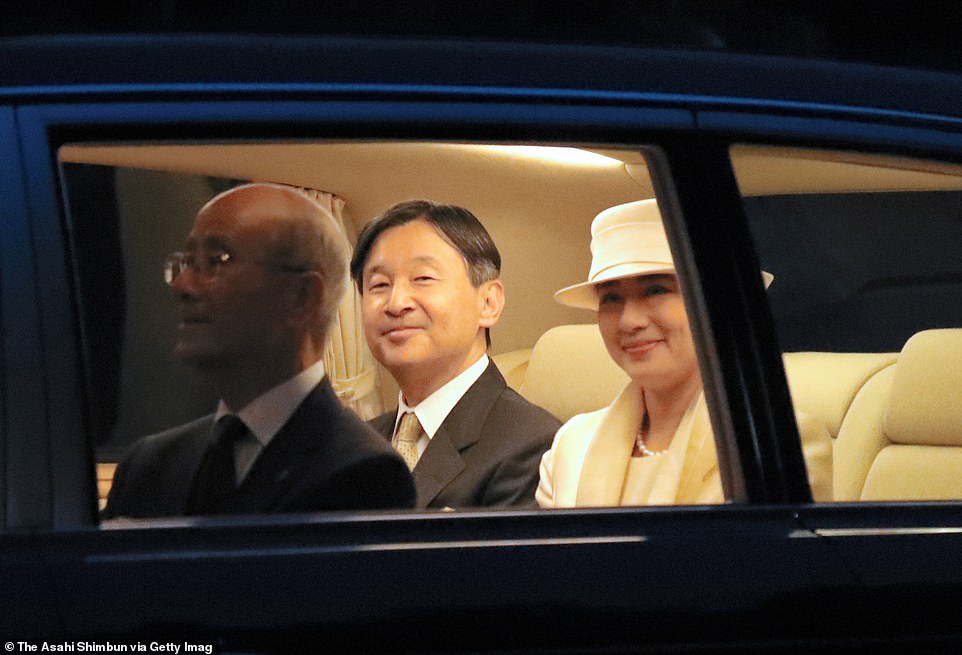 Emperor Naruhito and Empress Masako are seen on arrival at the Uji Yamada Station on their way to the Ise Shrine on November 21, 2019 in Ise, Mie, Japan 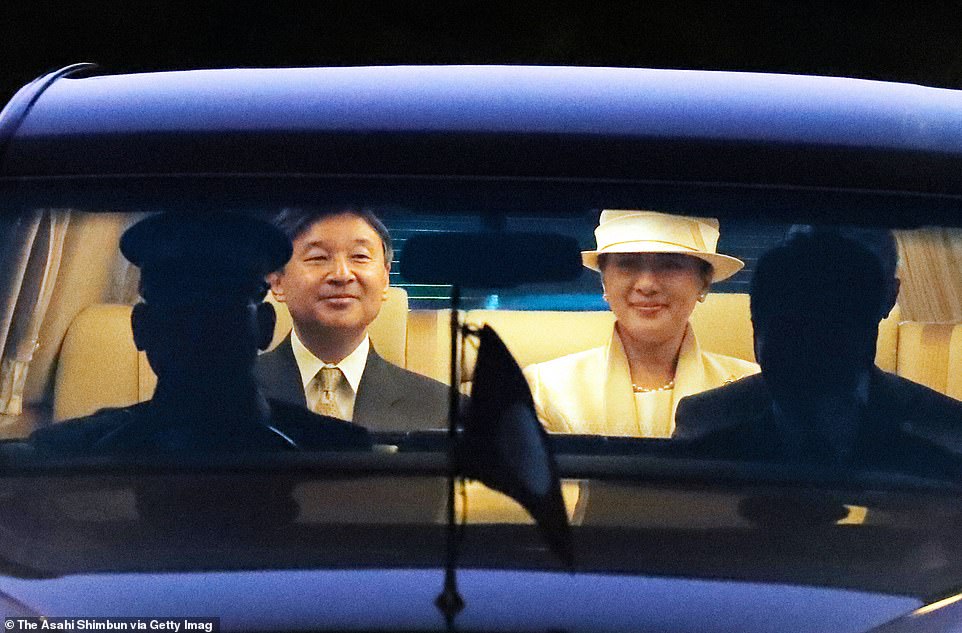 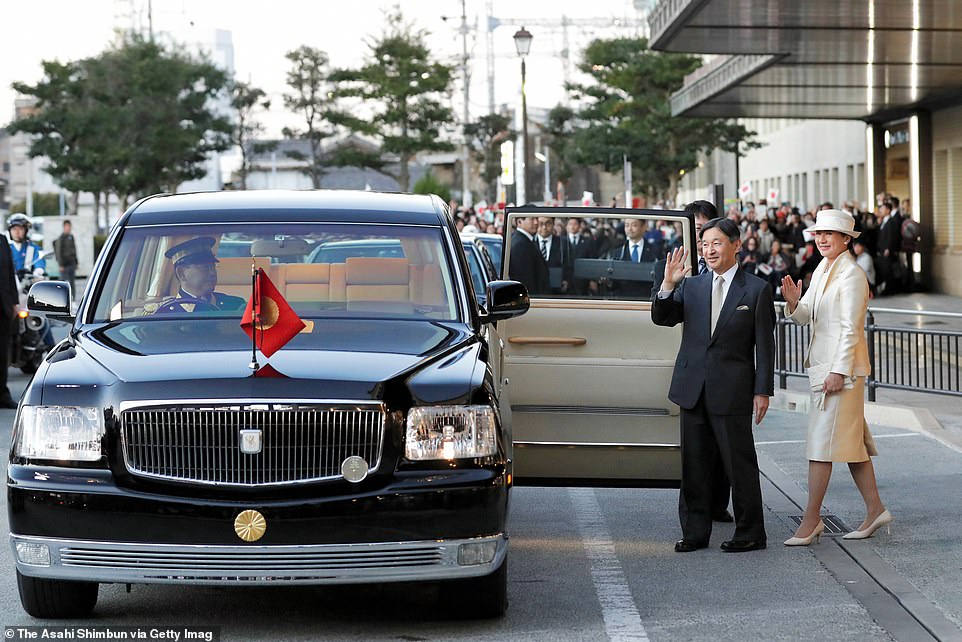 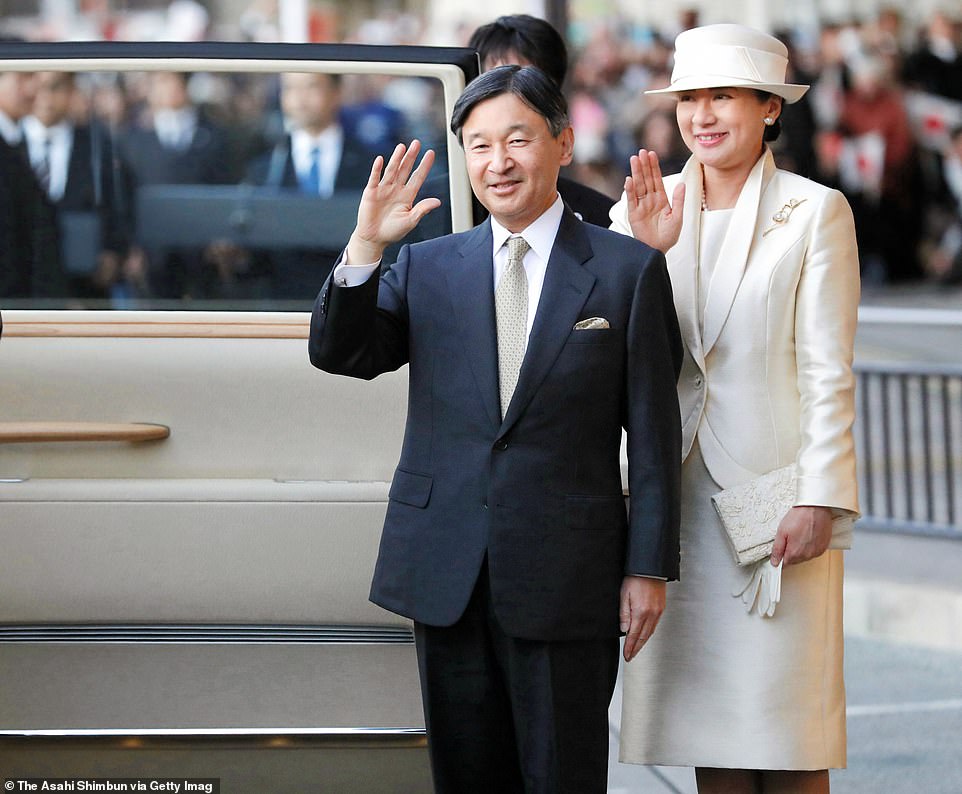 Emperor Naruhito and Empress Masako wave to well-wishers on arrival at the Uji Yamada Station on their way to the Ise Shrine on November 21, 2019 in Ise, Mie, Japan 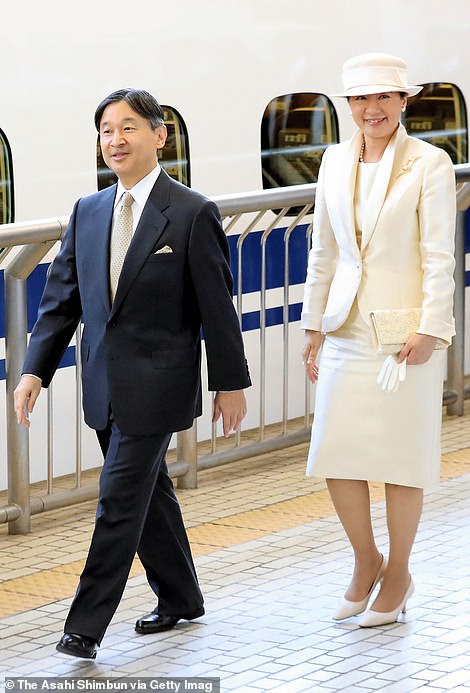 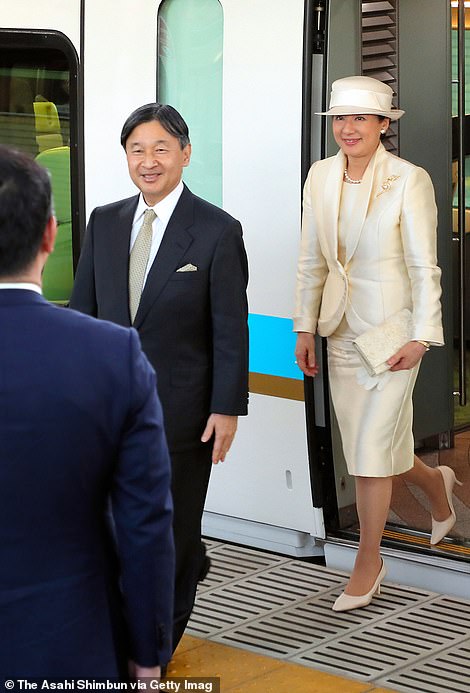 The pair are seen boarding a train to the Ise Shrine from Tokyo, Japan 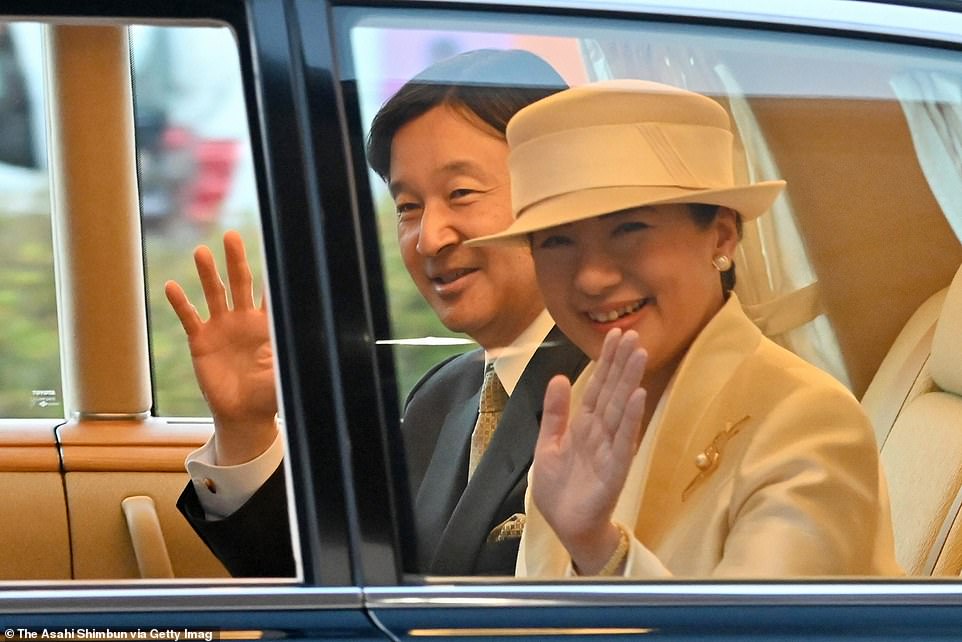 Emperor Naruhito and Empress Masako wave to well-wishers on arrival to Kintetsu Ujiyamada Station on November 21, 2019 in Ise, Mie, Japan 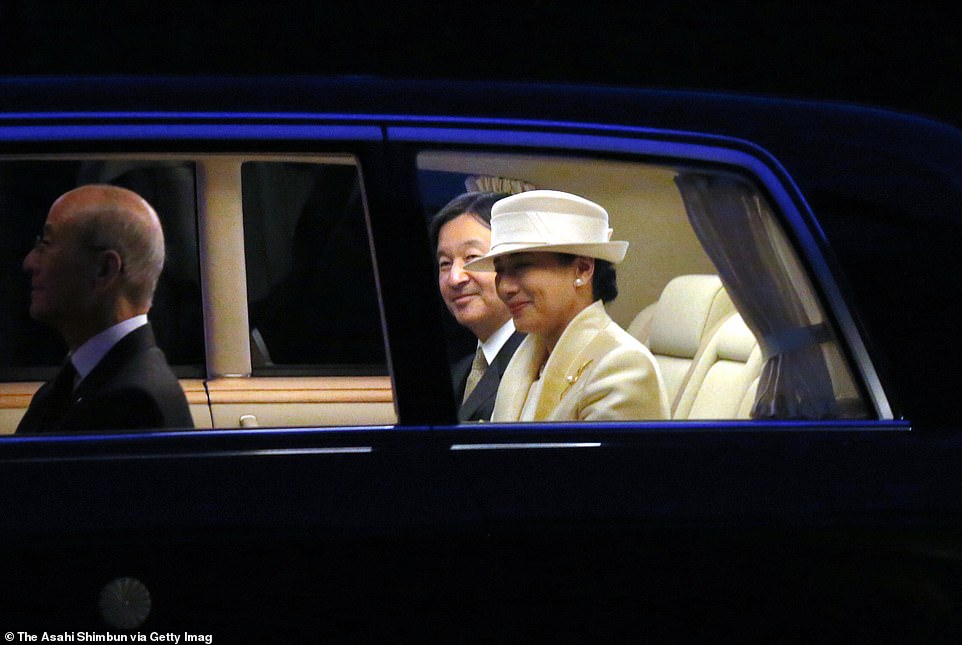 Emperor Naruhito and Empress Masako are seen smiling warmly on arrival to the Ise Shrine on November 21, 2019 in Ise, Mie, Japan

From Oxford to Japan’s Imperial Palace: How Naruhito was groomed to rule – even as his wife struggled to fit in

Japan’s new Emperor Naruhito begins his reign facing the delicate task of balancing modernity with the traditions of the world’s oldest monarchy, including protecting his family from the palace’s rigid rules.

The 59-year-old has been critical about the sometimes stifling lifestyle imposed on royals, after it was revealed wife Masako has been receiving treatment for ‘adjustment disorder’ almost their entire marriage.

Born on February 23, 1960, Naruhito was the first Japanese prince to grow up under the same roof as his parents and siblings – royal children were previously raised by nannies and teachers.

He studied for two years at Oxford University in the 1980s after graduating with a history degree in Japan, and reportedly adorned his residence with a poster of American actress Brooke Shields.

In Britain, he was able to shed some of the strictures of royal life in Japan, mingling with other students as well as the British royal family, and he has spoken fondly of that period.

In 1993, he wed Masako Owada, who became empress when Naruhito assumed the Chrysanthemum throne.

The daughter of a diplomatic family and educated at Harvard and Oxford, Masako left behind a promising diplomatic career of her own to marry into the royal family.

Naruhito promised to ‘protect her at any cost’ as she made the transition, and Masako explained she had sacrificed her career to ‘make myself useful in this new path’.

She also came under enormous pressure to bear a son because Japan’s imperial succession excludes women. This scrutiny only intensified after she gave birth to Princess Aiko in 2001 – the couple’s only child.

Naruhito later apologised, but he has called for ‘new royal duties’ to fit modern times.

The pressure on Masako eased somewhat when her sister-in-law gave birth in 2006 to a son, the now 13-year-old Prince Hisahito.

She appeared confident during Naruhito’s enthronement in May and at ease when the royal couple welcomed US President Donald Trump as the first foreign leader to greet the new emperor.

US Supreme Court rules half of Oklahoma is Native American land

'This is intolerable': fearful Australians in Hong Kong hasten plans to leave city

Coronavirus: The British-Pakistani doctors saving lives in both countries

Holidaymakers should wear masks at all times as part of the ‘new normal’, say travel companies

Xinjiang: US sanctions Chinese officials over 'abuse' of Muslims