Japanese fishermen have brought back their first whale in 31 years after commercial whaling was reintroduced following a decades-long hiatus.

Five vessels from whaling communities left port in northern Japan‘s Kushiro with their horns blaring and grey tarps thrown over their harpoons. By Monday afternoon, a first whale had been caught and was being transported back to shore.

The hunts come after Japan decided to withdraw from the International Whaling Commission, a move slammed by activists and anti-whaling countries but welcomed by Japanese whaling communities.

‘We were able to catch a good whale. It’s going to be delicious.’ 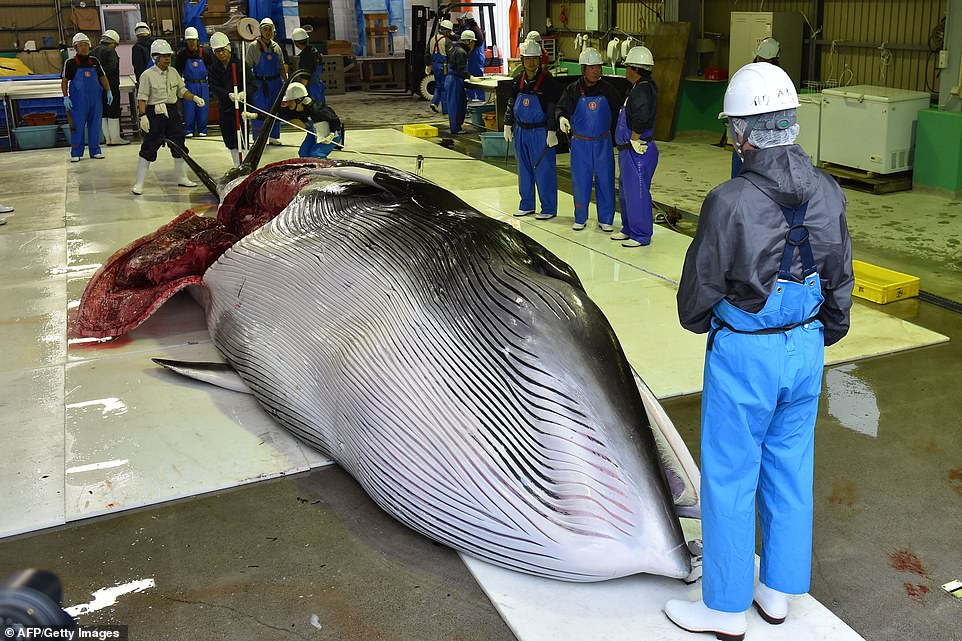 Workers measure a slaughtered Minke whale in Kushiro, Hokkaido after whaling operation started up for the first time in 31 years on Monday morning 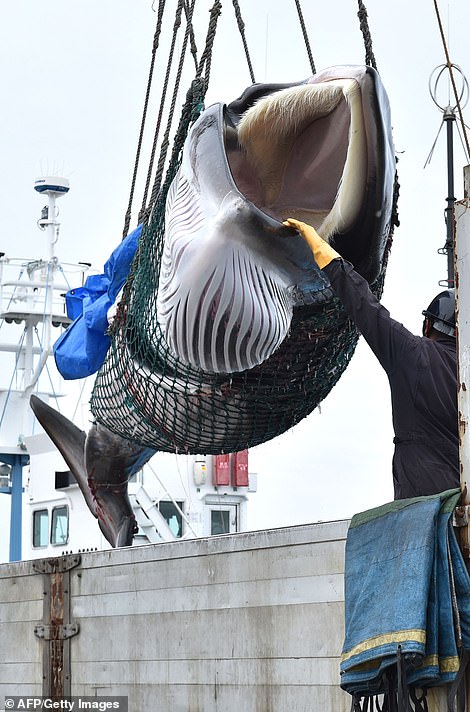 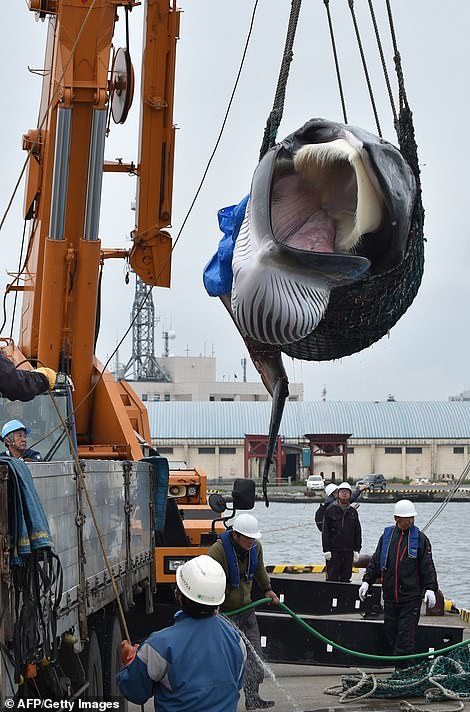 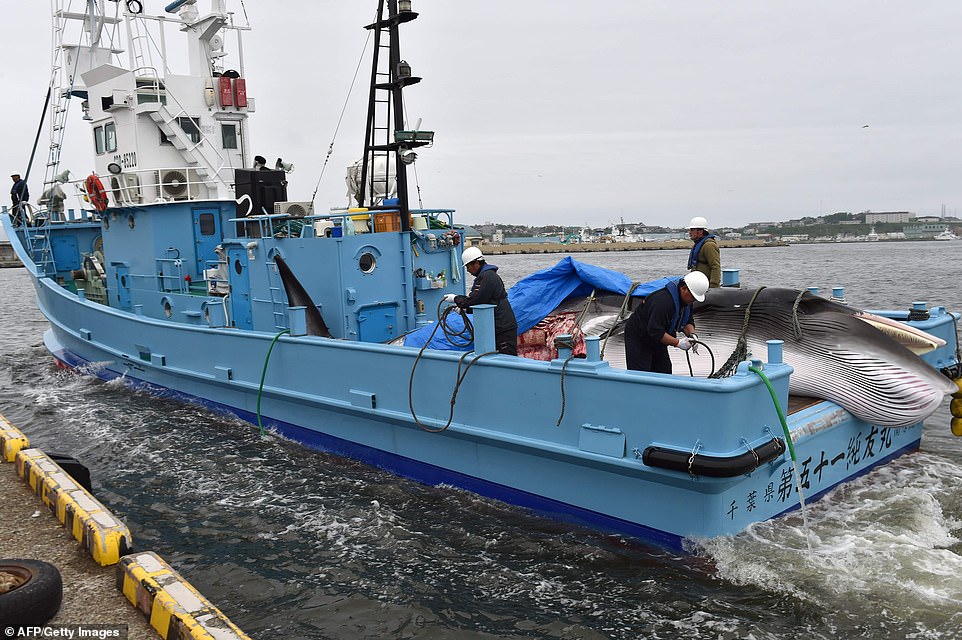 As an International Whaling Commission member, Japan was banned from commercial hunts of large whales, but having left in 2016 it is now free to carry out fishing operations

‘My heart is overflowing with happiness, and I’m deeply moved,’ said Yoshifumi Kai, head of the Japan Small-Type Whaling Association, addressing a crowd of several dozen politicians, local officials and whalers in Kushiro before the boats left.

READ  Mum finds out her daughter, 10, was swapped at birth in DNA test after she was raped and murdered ‘by stepdad and uncle’

‘This is a small industry, but I am proud of hunting whales. People have hunted whales for more than 400 years in my home town.’

Whaling vessels were also leaving Monday morning from other ports including in Shimonoseki in western Japan.

The country’s Fisheries Agency said Monday it had set a cap for a total catch of 227 whales through the season until late December – 52 minke, 150 Bryde’s and 25 sei whales.

‘I’m a bit nervous but happy that we can start whaling,’ 23-year-old Hideki Abe, a whaler from the Miyagi region in northern Japan, said before leaving.

‘I don’t think young people know how to cook and eat whale meat any more. I want more people try to taste it at least once.’ 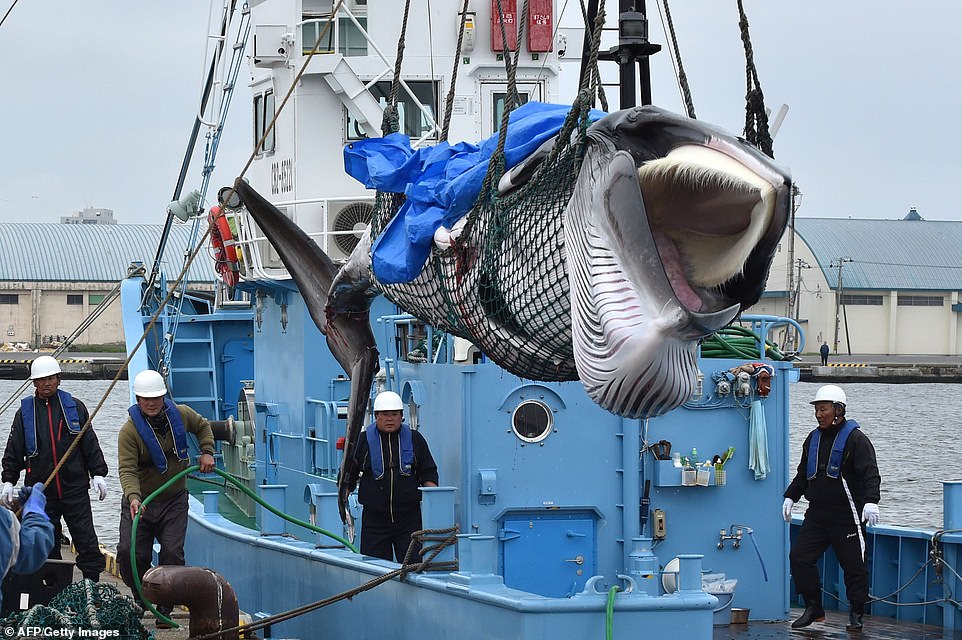 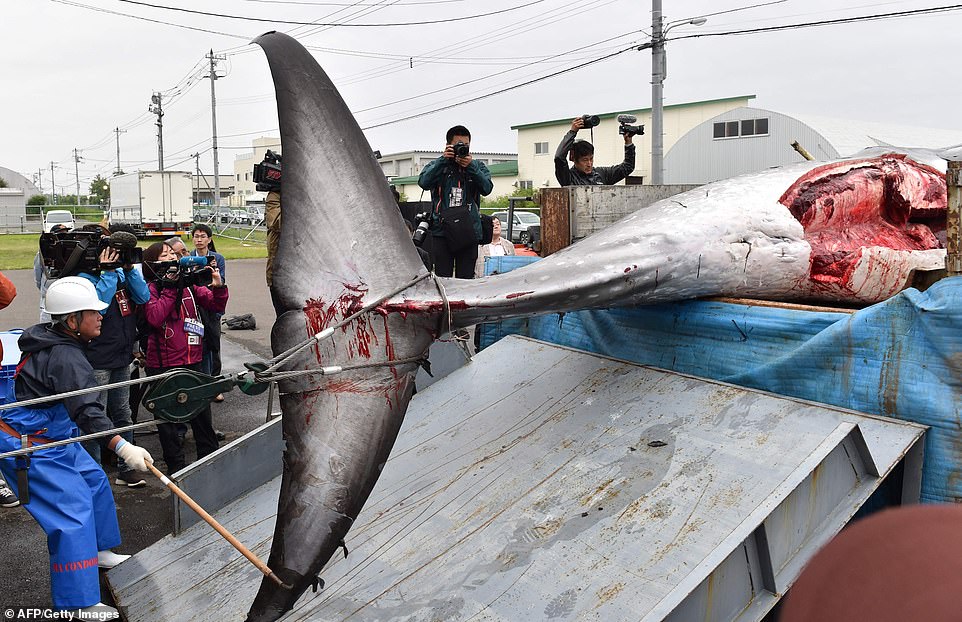 The whale is unloaded from a truck. The country’s Fisheries Agency said Monday it had set a cap for a total catch of 227 whales through the season until late December 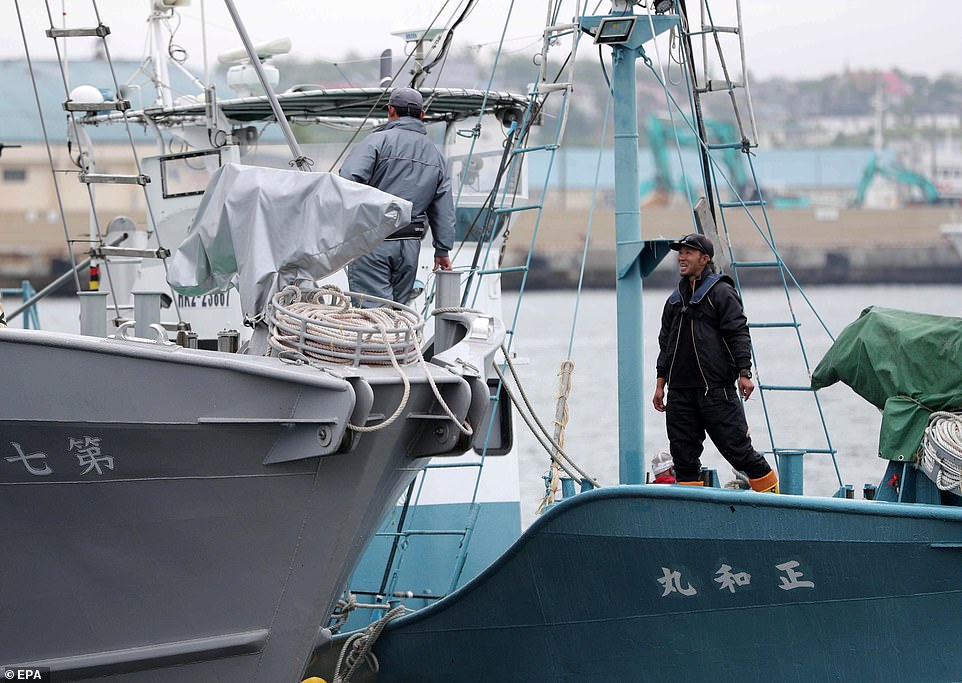 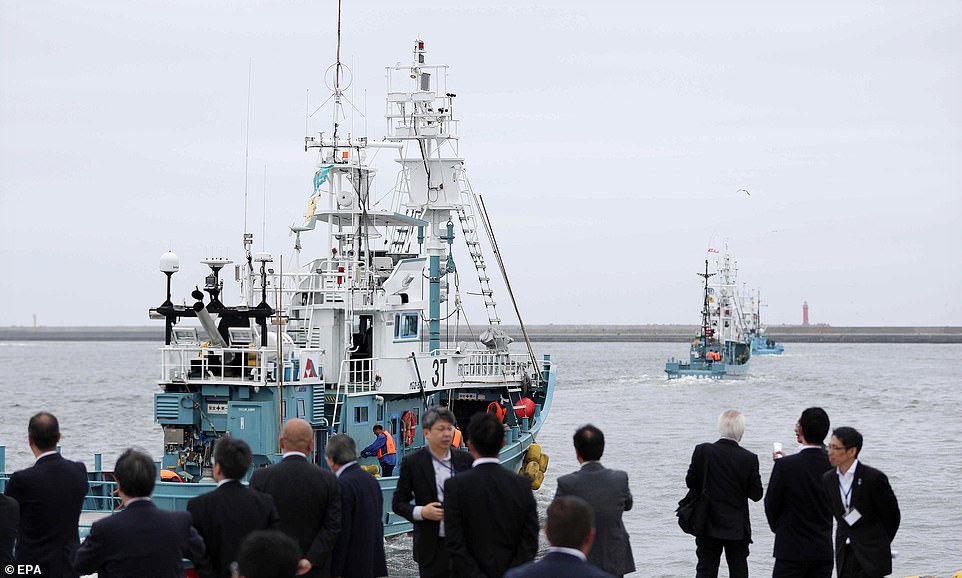 Japanese whaling ships are leaving a Kushiro Port to begin a commercial whale hunt for the first time in 31 years, Japanese northern island of Hokkaido 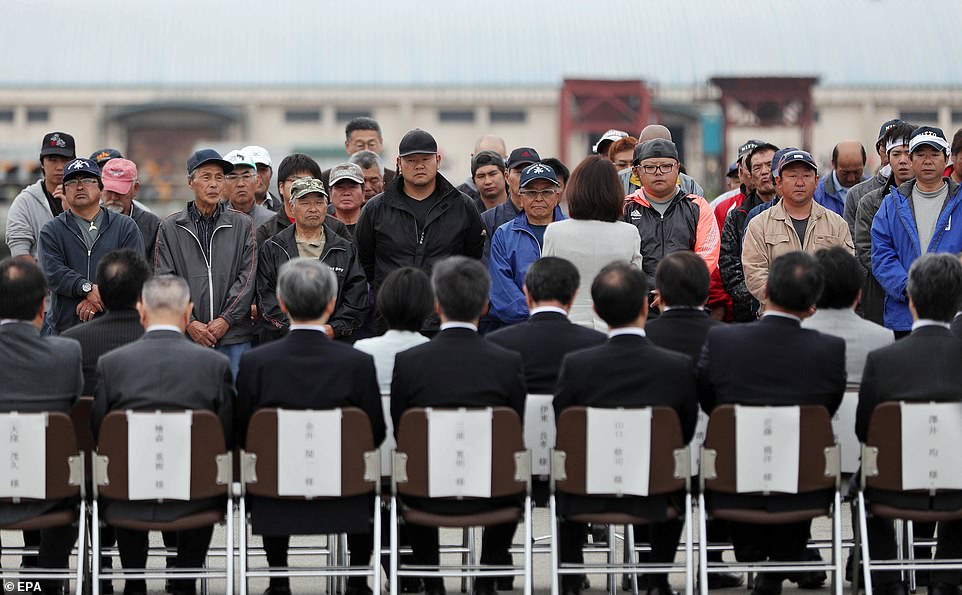 Fishermen line up to take part in a ceremony attended by members of the public to bless their trip on Monday morning in Kushiro, Hokkaido 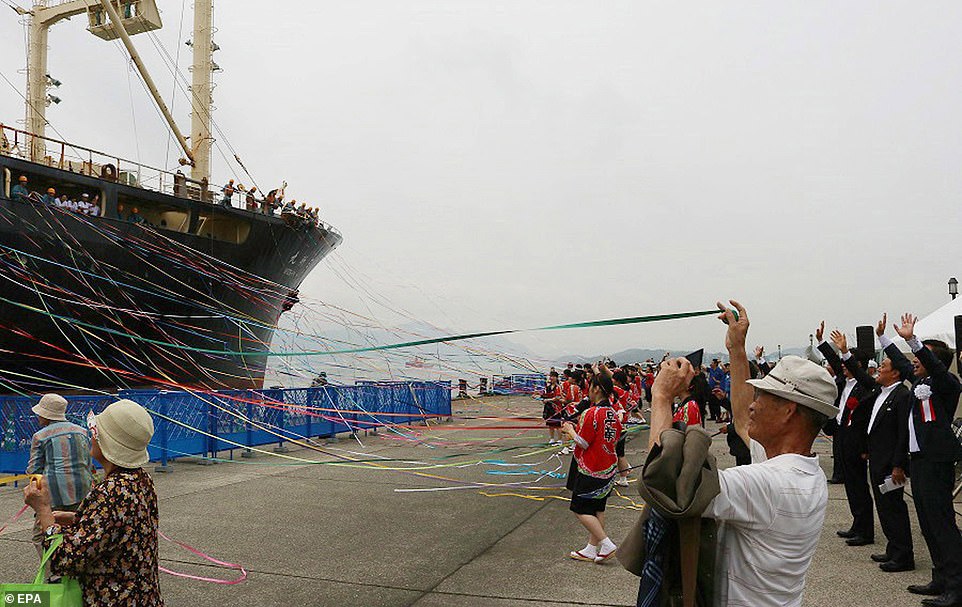 The mother ship of a whaling fleet is sent off at Shimonoseki port, southwestern Japan. Fishing operations took place across the island nation on Monday

Whaling has long proved a rare diplomatic flashpoint for Tokyo, which says the practice is a Japanese tradition that should not be subject to international interference.

As an IWC member, Japan was banned from commercial hunts of large whales, though it could catch small varieties in waters near its coastline.

But it also exploited a loophole in the body’s rules to carry out highly controversial hunts of whales in protected Antarctic waters under the banner of ‘scientific research’.

Activists said the hunts had no scientific value, and Japan made no secret of the fact that meat from whales caught on those hunts ended up sold for consumption.

‘This is a sad day for whale protection globally,’ said the group’s head of campaigns Nicola Beynon, accusing Japan of beginning a ‘new and shocking era of pirate whaling’.

With its withdrawal from the IWC, Tokyo will carry out whale hunting off Japan, but will end the most controversial hunts in the Antarctic.

‘The resumption of commercial whaling has been an ardent wish for whalers across the country,’ Shigeto Hase, the head of Japan’s fisheries agency, said at the departure ceremony in Kushiro.

He said the resumption of commercial whaling would ensure ‘the culture and way of life will be passed on to the next generation’. 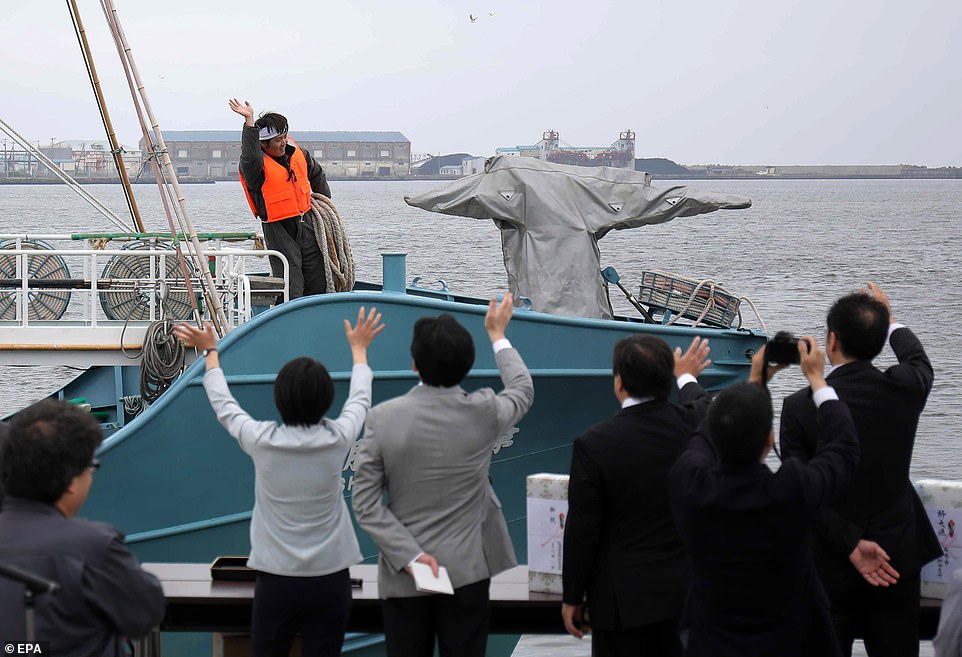 Japan decided to withdraw from the International Whaling Commission recently, a move which resulted in the fishing of whales being permitted again 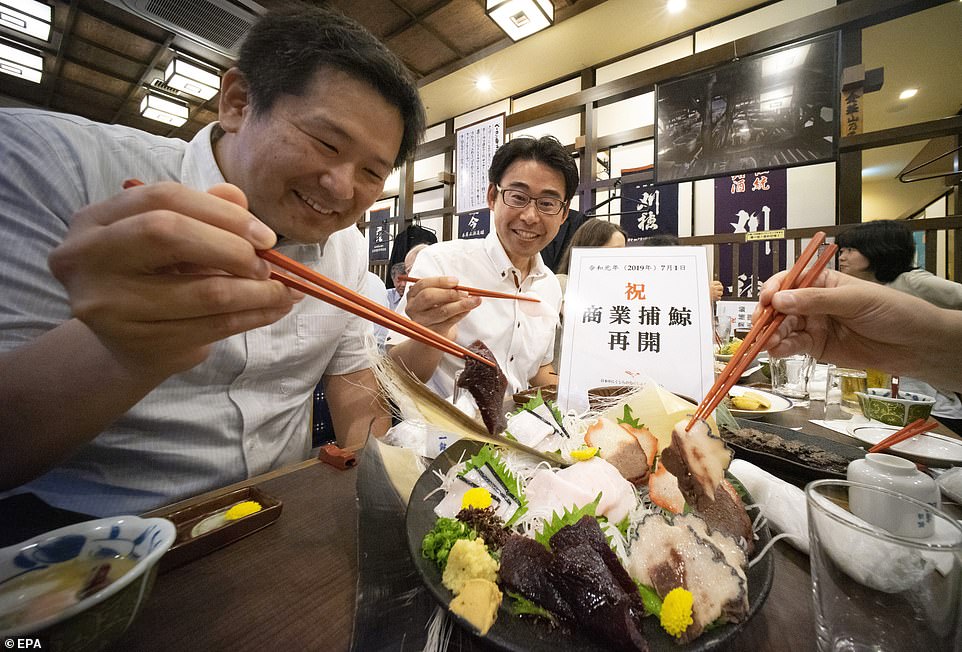 People enjoy eating whale dishes at a restaurant in Tokyo. Whale meat is used in a variety of Japanese dishes

Whale meat was a key source of protein in the immediate post-World War II years in Japan, when the country was desperately poor.

Most reports suggest consumption has declined significantly in recent decades – with much of the population saying they rarely or never eat whale meat – and activists have pressed Japan to ditch the practice.

But a Japanese government official said ‘demand has been stable’.

‘It is totally false that commercial whaling will not be viable as demand is declining,’ he said.

Some believe that Japan’s return to commercial whale hunting will effectively sound the death knell for the industry.

‘Japan is quitting high-seas whaling… that is a huge step towards the end of killing whales for their meat and other products,’ said Patrick Ramage, director of marine conservation at the International Fund for Animal Welfare.

He said commercial whaling in Japanese waters was unlikely to have much of a future given dwindling subsidies and the shrinking market for whale meat.

‘What we are seeing is the beginning of the end of Japanese whaling.’ 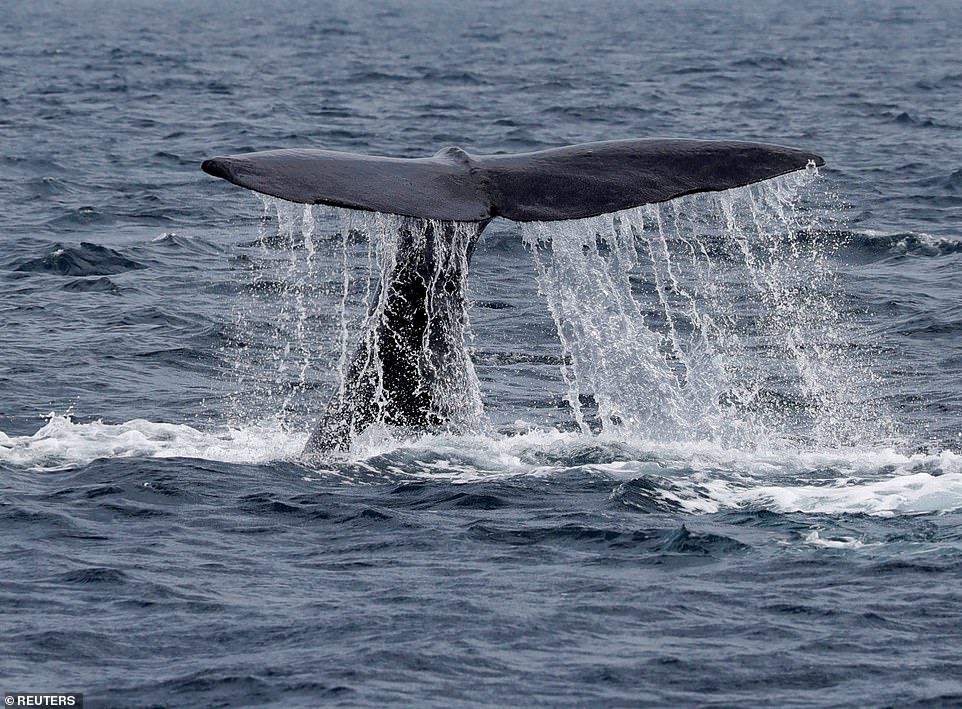 A sperm whale sticks out of the sea as it dives in the sea near Hokkaido, Japan 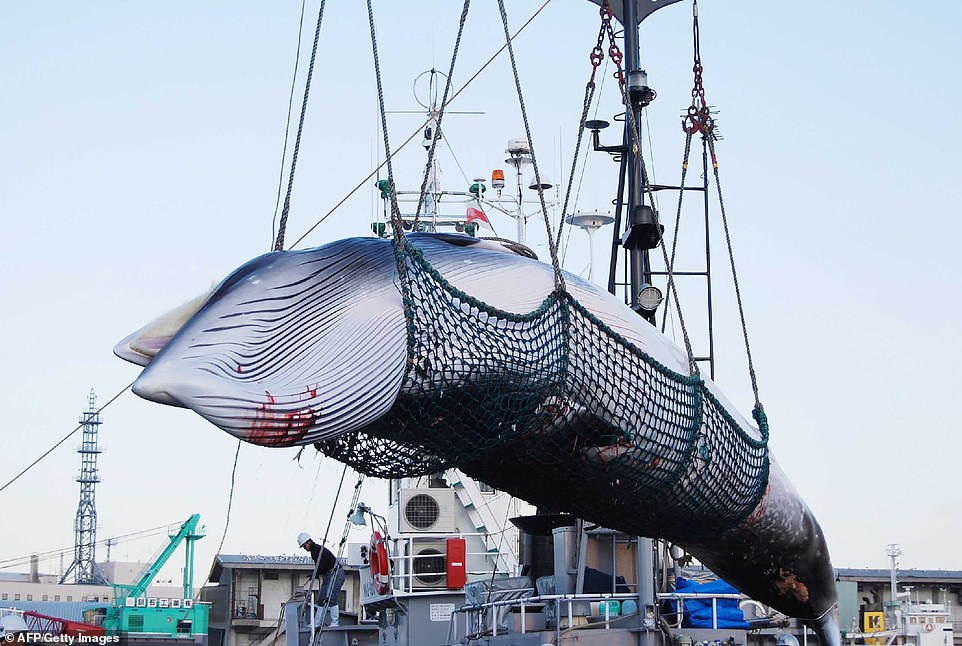 A Minke whale being lifted by a crane during the North Pacific research whaling programme at the Kushiro port in Kushiro, Hokkaido, in 2017 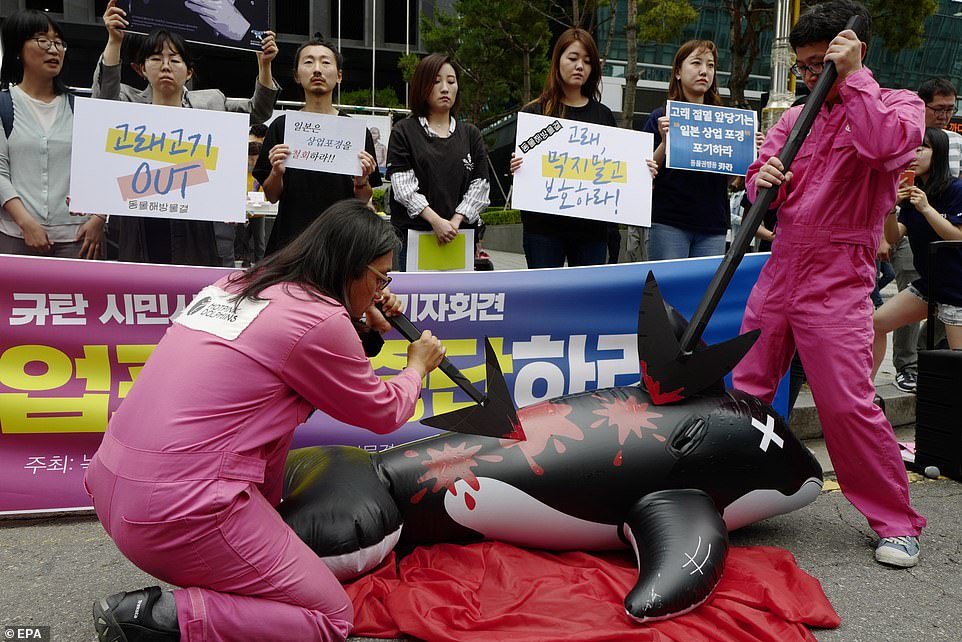 Members of an environmental activist group take part in a rally against Japan’s whaling activities near the Japanese embassy in Seoul, South Korea, last month

Count Binface to run for mayor of London

Britain says it is prepared to walk away from post-Brexit EU talks: ‘We will not trade away our sovereignty'

Death toll from Delhi's worst riots in decades rises to 38