NEWSCABAL
Home » Jack Grealish is showing his value to Man City, but not how everybody expected
sports


While other members of Manchester City’s squad are struggling for game time, the former Aston Villa star has slotted in as if he’s been playing for the club his whole life following his £100million arrival 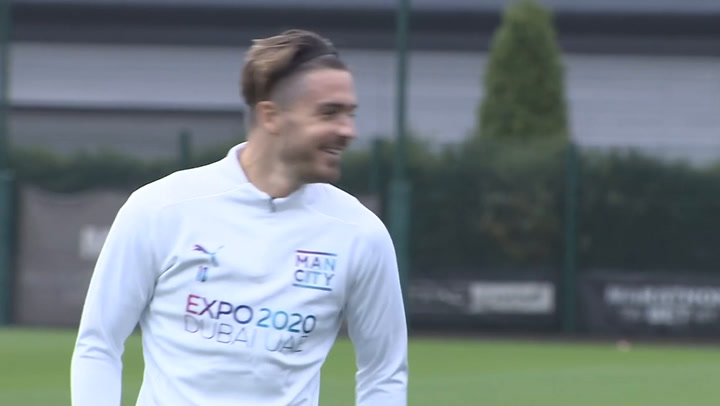 In the aftermath of Manchester City’s impressive victory over Brighton & Hove Albion, Jack Grealish’s name wasn’t the one on most people’s lips.

It was the same story earlier in the season, when City put five goals past Arsenal without their new man finding the net, and on a handful of other occasions.

If you spoke to football fans when the finishing touches were being put on the England man’s record-breaking summer move, telling them Grealish would have just two City goals to his name by late October, some might have been concerned.

However, as Pep Guardiola’s team continues to impress at home and on the continent, the former Aston Villa captain has shown his importance to the first team goes far beyond goals and assists.

What would represent a great debut season for Jack Grealish? Have your say in the comments section

Despite suggesting there was even more to come from Grealish, Pep Guardiola described the 26-year-old’s form for his new club as “excellent” in the lead-up to the Brighton game.

Guardiola has never been one to insist on using his shiny toy only because they cost a lot of money, with the likes of Raheem Sterling and Bernardo Silva both spending time out of the first XI over the last 18 months despite their significant price tags.

Even Riyad Mahrez was eased into the fold, featuring as a substitute in many of his early games despite arriving for what was then a club record fee.

With Grealish, though, there’s been a sense this season that he’ll start when he’s available, and that’s because his presence improves the team even when he isn’t scoring.

There’s an obvious benefit to having a player whose presence terrifies the opposition, and we saw this with Grealish during his performances for England at Euro 2020.

The more time defenders spend occupied by what he can do, the more it frees up other members of the forward line.

And then, on those occasions when he’s left alone, we get moments like the run which saw him create a goal for Phil Foden at the Amex Stadium on Saturday.

One of the challenges facing Grealish upon his arrival in Manchester concerned his ability to fulfil a new role in terms of responsibility.

While there’s still an onus on him to perform, thanks to the transfer fee if nothing else, he knows he won’t be in a situation where everything goes through him to the degree it did at Villa Park.

To this end, there appears to have been a greater understanding regarding his early impact, even if the numbers don’t match those he was putting up at his previous club.

We’ve been left in a bizarre situation when it comes to assessing Grealish’s direct impact for Manchester City.

We know he can deliver more, which might be part of the reason why no one is panicking in the face of a start which, while showing plenty of promise, isn’t necessarily what you’d expect from someone who cost £100m.

Had Guardiola found reason to drop Grealish from the team, or even to ease him in like he did with Mahrez, there might be more questions.

Instead, the City boss has shown he trusts his new man and, as far as we can tell, knows how he wants to use him.

Grealish may have had the confidence to know he didn’t need to do everything at once at his new club, but now he knows he’ll be given time to reach the next level.

City fans should be extremely excited by the prospect of what that will look like.