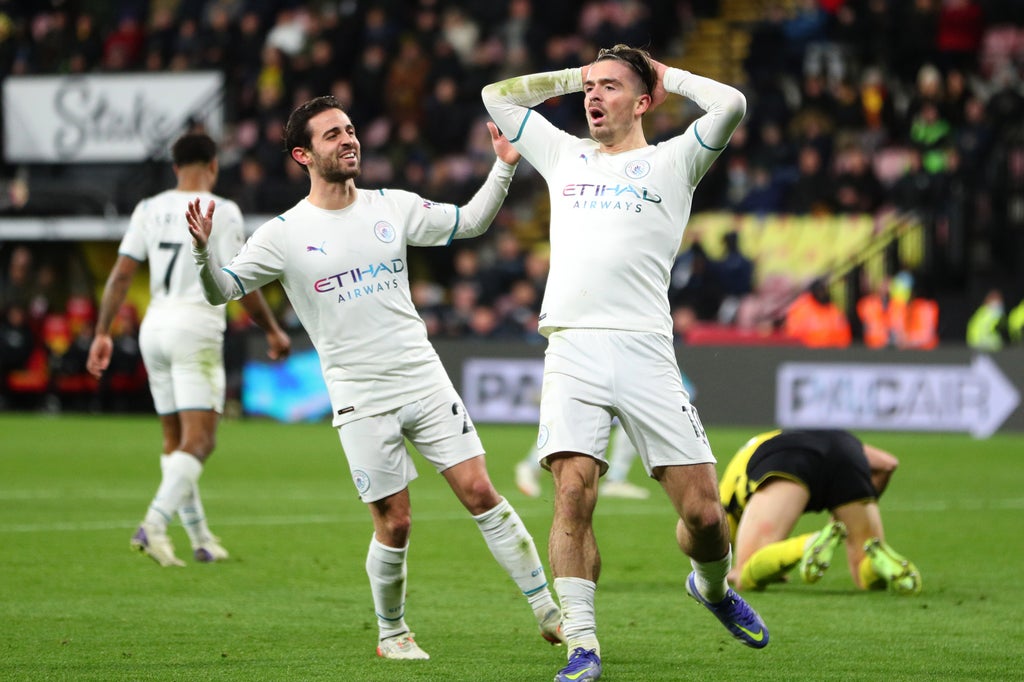 Manchester City enjoyed a near-perfect evening on Saturday with a 3-1 win which sent the champions back to the top of the league, yet Jack Grealish could be forgiven for leaving Vicarage Road in a huff.

Grealish was deployed in an unfamiliar false nine role and he was heavily involved in much of City’s attacking play, linking with the carousel of skilful technicians Pep Guardiola had picked. On the ball he was determined and persistent and was perhaps a little unlucky not to score, thwarted by an excellent Daniel Bachmann save in the first half and the crossbar in the second. But more revealing was to watch Grealish when the ball was nowhere near him.

In the sixth minute, with City already 1-0 up through Raheem Sterling’s header, Guardiola stepped out to the edge of his technical area and delivered a performance of maniacal arm-waving and exasperated head-clutching in the direction of Grealish. Throughout the first half the manager repeatedly sent screams of “Jack!” into the cold night, desperate to correct something Grealish had failed to interpret about his duties in the role.

When Bernardo Silva scored City’s second, Guardiola intercepted Grealish’s jog towards the celebrations, pulling him to the touchline to furiously explain the mistake, eyeballs bulging, like a man whose adorable puppy had, once again, defecated on the living room floor.

As Grealish stood there, brow furrowed attempting to decipher Guardiola’s words against a hum of noise, it occurred that this sort of thing probably didn’t happen much under Dean Smith. Before the summer Grealish had only ever played for one club, bar a brief loan at Notts County, having joined Aston Villa 20 years ago aged six. Joining City is just about as extreme an environment as it gets without moving abroad and learning Guardiola’s football is like learning a new language – disconcertingly, one you thought you already knew.

“I’ve found it a lot more difficult than I thought I would, adapting to a different manager and teammates,” he told the Daily Telegraph last week. “At first I thought I’d have more of the ball, get more assists and goals but it doesn’t work like that at all. I’ve had nowhere near as much of the ball as I used to get at Villa.”

What Grealish needs more than anything is time. Time to adapt, time to learn. That much was illustrated at Watford by City’s man of the match, Bernardo Silva. He arrived at the Etihad Stadium in 2017 having totalled 22 goals and assists for Monaco the previous season – the same tally Grealish managed at Aston Villa last year. Bernardo’s impact was not immediate, but gradually his place in the team has become more assured, his role now elevated to starting most games and playing 90 minutes too, and he has developed into one of the league’s outstanding players.

Riyad Mahrez and Raheem Sterling both took their time to find their feet at the club and both eventually blossomed under Guardiola’s guidance – Mahrez has found himself out of favour this season but at times during the last campaign he was City’s best attacking player. Like them, Grealish is now undergoing his own education, and there is no better place to learn than on nights like Saturday, playing at the heart of a winning team.

Guardiola was animated on the touchline but he has been staunch in his backing of Grealish off the pitch. Asked about Grealish’s missed chances, the manager said: “Scoring goals is the most difficult thing in football. What is important is to create the chances we have done and these players with the quality we have will score one goal. What is important is the way we are playing.”

Just after an hour’s play, Grealish’s No10 flashed up on the fourth official’s board. He trudged off disconsolately to a chorus of “Super Jack” from the away fans, and as he reached his manager on the touchline, the reaction was telling. Guardiola offered up a hug, a terrifying grin and a slap on the back almost hard enough to knock over his £100m signing. Another lesson was over, with the full spectrum of Guardiola’s tough love finally completed, another night to help eventually bring out the best of Grealish in City blue.