Last year was not a good one for denim. The pandemic catalysed an era of elasticated waists meaning jeans were relegated to the annals of pre-pandemic fashion. Sales tanked. Levi’s announced plans to cut 15% of its workforce. True Religion, Lucky Brand and G-Star Raw all ran into serious difficulties in April. People who had previously worn jeans most days began to question why they had ever crammed themselves into something so rigid.

Fast-forward to early April 2021, and a quick scan round the outdoor tables of pubs and restaurants on the first trading night after the most recent lockdown easing would tell you a different story – one of resilience. From white jeans to straight-leg, skater to skinny, punters seem to be wearing jeans as if the pandemic and its elasticated waists never happened.

Some see it as a moment to break out of jogging bottoms. Jeremy, a 25-year-old programmer, didn’t wear jeans in lockdown, opting for comfy boxing shorts and tracksuit bottoms instead. But he has chosen to wear them for pints with friends tonight, at a north London pub, the Rose & Crown. “They seemed more suitable to go out. It’s a bit more of a dressy affair.”

On a neighbouring table, Linda, Abi and Sarah are of a similar mind. All in their late 20s and working in public policy, the trio spent much of the past year in leggings and jogging bottoms. But felt the need to switch it up for their first night out in a while. Linda considered a dress, “but then it seemed like too much of a jump from sweatpants. Jeans are usual – easy.”

Others, such as Rhea, a 27-year-old architect nursing a pint outside Ryan’s bar, wore jeans every day in lockdown. She has 11 different pairs, “mostly flared, mostly colourful”, though the pair she is wearing tonight are a relatively muted ecru.

A gradual easing of lockdown combined with unusually cool spring temperatures suggest we could be in for a denim renaissance. On the shopping platform Lyst, there has been a 48% increase in searches for jeans since the beginning of the year. At Matches Fashion, jeans are up 70% compared with last year, while at luxury jeans stalwart Donna Ida, sales for denim styles are up 300% compared with this time last year. Globally, Levi’s shares have recently risen, with the company predicting strong sales growth for the first half of this year.

It is in some ways a surprising bounce-back. Even before the pandemic, heritage brands including Lee and Levi’s had introduced stretch to their products, sacrilege to jeans’ rugged backstory. Beyond that, jeans’ lack of eco-credentials had been coming under increasing scrutiny with experts saying the denim industry was at a pivotal moment. While efforts were being put into making jeans more sustainable – for instance by cutting down on the amount of water needed to grow the cotton for every pair (estimated to be 10,000 litres) – jeans were being called out for the water-guzzling garment that they are.

The quiet denim comeback may not entirely be a case of history repeating itself, however. Last week, Levi’s CEO, Chip Bergh, told CNBC that we could be in the genesis phase of a “new denim cycle”. Citing the last cycle as driven by skinny jeans and lasting 10 years, he said that while he doesn’t “think skinny jeans are ever going to go away completely … clearly we are seeing a very strong demand for these looser fits, on the men’s side of the business and the women’s side”. The shift is apparently being led by Gen Z and their love of so-called mom jeans.

Data from Lyst attests: the most-searched-for styles of jeans at the moment are slouchy, baggy jeans and wide-leg jeans, and, over the past three months, wide-leg and boyfriend styles have been growing at a faster pace – they’re up 148% compared with the same period last year. According to a Marks & Spencer spokesperson, while “skinny and slim fit styles continue to be customer favourites, during lockdown we have experienced increasing demand for more casual denim styles including mom, boyfriend and wide-leg shapes”.

At the luxury end, the picture is similar. According to Suzanne Pendlebury, the head of womenswear buying at Matches Fashion, straight-leg shapes were most popular. At Net-a-Porter, meanwhile, we saw a rise in relaxed 90s shapes and even low-slung waistlines, as well as for a more trend-led jean style called the “balloon fit”, which is high-rise and with a barrel leg.

Judging from the pub-goers on this north London street, the jeans-wearing public still seem relatively stuck in their skinny-jean ways. Jeremy may have opted for a baggier pair than usual tonight, but he usually goes for skinny ones: “But it’s been lockdown. Maybe if I lose a few kilos …” Sarah has been trying to break her skinny jeans habit for a while, but is yet to succeed. “The thing that you learn to love when you’re a teenager? You get stuck in it.” 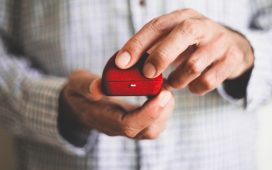