The Netherlands said it does not allow non-essential visitors from the UK due to Covid concerns. Fans trying to get into the country have claimed the Dutch response has been unfair as other countries not on the Netherland’s green list have been allowed in.

He said: “Welsh supporters have been turned away from Amsterdam airport.

“They can’t go and see the game in Amsterdam which is being played on Saturday night against Denmark.

“It’s hypocrisy that UEFA can come here from any country in the world yet we can’t go as supporters to other parts of the world.”

The upcoming last-16 match comes after Wales reached the knockout stage of the Euro 2020 tournament despite losing 1-0 to Italy in Rome.

The team took second place in Group A, finishing above Switzerland on goal difference.

Football fans turned away at the airport added the situation was “worrying and not well communicated.”

“They will also need to book and pay for a mandatory PCR test on day two and day eight of their quarantine.

“Importantly, the regulations in place in Wales are only one part of the requirements for travel – anyone planning to travel must also check the requirements and restrictions for entry into those countries.

“For all countries outside the EU Schengen travel area a travel ban is in place, unless a country is on the EU safe list.

“The UK is not on this list and therefore a ban on travel to the Netherlands is in place for all non-essential travel.”

She added: “Visiting to watch a football match is classed as non-essential travel.”

The UK Government advises Brits not to travel to the Netherlands unless it is essential. 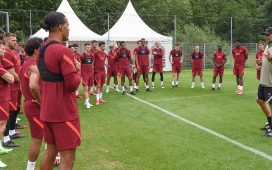