Italy is moving towards barring unvaccinated people from popular social and sports activities as it tightens coronavirus restrictions amid rising infections and hospitalisations.

The “super green pass” is expected to take effect over the next week and would require people to prove they are vaccinated or have recovered from Covid-19 in order to access cinemas, theatres, gyms, nightclubs, ski lifts and stadiums, as well as to be served indoors at bars and restaurants.

Under current “green pass” rules, those who provide proof of a negative test taken within the previous 48 hours are permitted to access those activities.

The prime minister, Mario Draghi, has been under pressure from regional governors to impose a stricter health mandate against people who have not been vaccinated. He is meeting cabinet ministers on Wednesday afternoon to give the decree the final nod, according to reports in the Italian press.

Draghi is also reported to be contemplating making the Covid vaccine obligatory for the police force and teachers.

It is unclear if the new pass would be required across Italy or only in regions with high infections and where hospitals are under strain.

Italy introduced its green pass in August and made it mandatory for workplaces in October. It is also required for boarding long-distance trains and domestic flights. Under the new measure, unvaccinated people will still be able to travel and access their workplace with proof of a negative test.

The workplace mandate intensified protests across the country, especially in the northern city of Trieste, where there has been a sharp rise in infections and hospitalisations in recent weeks. Calls for tighter rules have been led by Massimiliano Fedriga, the president of Friuli Venezia Giulia, the region surrounding Trieste.

This month Fedriga, a politician with the far-right League, described the anti-vaccination and anti-green pass protests as “idiocy”. He said on Sunday that the super green pass was not discriminatory and the only alternative would be another lockdown.

Umberto Lucangelo, the head of an intensive care unit at a hospital in Trieste, recently said 90% of Covid patients were unvaccinated and many had been involved in the protests.

The tougher rules have been supported by regional presidents from across the political spectrum. Stefano Bonaccini, the centre-left Democratic party president of Emilia-Romagna, told Ansa: “I think people who are vaccinated should have a preferential path in those places of social and cultural life, in particular, in order to prevent them from having to close.”

Giovanni Toti, the Forza Italia president of the Liguria region, said any further restrictions should apply to “people who have not had the vaccine, not to people who have done so correctly.”

As of Wednesday morning just over 84% of Italy’s population over the age of 12 were fully vaccinated. Italy registered 10,047 new infections on Tuesday and 83 fatalities, bringing the total death toll to 133,330, the highest in Europe after the UK.

The number of admissions into intensive care units across the country increased by six to 560 on Tuesday, while general hospitalisations rose by 90 to 4,597. 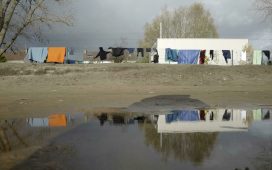