Italy has extended its lockdown until 13 April but signs are emerging that the rate of coronavirus infection both there and in Spain, the two countries that have suffered the highest global death tolls in the pandemic so far, may be reaching a plateau.

“Experts say we are on the right track and the drastic measures we have taken are starting to yield results,” the health minister, Roberto Speranza, said. He warned, though, that it would be “unforgivable to assume this was a definitive defeat” of Covid-19 and it would be “a long battle”.

Italy’s civil protection authority announced on Tuesday that the country’s tally had climbed by 837 deaths to 12,428, the highest in the world, and that the number of new confirmed cases had risen by 4,053, taking the country’s total to 105,792.

“The curve tells us that we’re at a plateau,” said Silvio Brusaferro, the president of Italy’s Higher Health Institute (ISS). “That doesn’t mean we’ve hit the peak and that it’s over, but that we must start the descent … by applying the measures in force.”

Spain, which crossed the threshold of 100,000 confirmed cases on Wednesday and reported another record single-day death toll of 864, is following a similar pattern, with officials saying on Wednesday a “trend change” was starting to be seen.

Between 15 and 25 March, new cases were growing at a rate of 20% a day. From 25 March, that rate dropped to 12% or lower. María José Sierra, of Spain’s centre for health emergencies, said the latest figures indicated the increase in new cases was continuing to level out.

“Generally speaking, we can say that yesterday’s rise in cases, which was around 8%, tells us that we’re carrying on in the stabilisation phase of the pandemic,” Sierra told a press conference.

“If we only look at cases of people who are being treated in hospitals – the figures that allow for a precise analysis of the spread of the epidemic and of the effectiveness of our measures against the virus – then the percentage is still coming down compared to previous days. That helps tell us social distancing measures are really working.”

According to the Johns Hopkins University tracker, the pandemic has infected more than 870,000 people worldwide and killed more than 43,000. Nearly half the world’s population are living under some form of requested or mandatory confinement.

As equipment shortages continue to dog Europe’s response to the pandemic, France, which on Tuesday announced 499 new deaths, its biggest increase since the start of the pandemic, said it would invest €4bn in “strategic” health products including masks and respirators, with the aim of making the country “fully and completely self-sufficient” by the end of this year.

“We have to produce in France, on our territory, from now on,” the president, Emmanuel Macron, said. “Certain products and certain materials have a strategic importance and we need Europe to be independent to reduce our dependence. The day after the epidemic will not be like the day before; we must rebuild out national and European sovereignty.”

Germany’s finance minister, Olaf Scholz, announced the government would financially support companies taking a gamble on switching their production to making facial masks. But politicians in Germany, which has registered 71,000 confirmed cases and 775 deaths, have declined to force industry to retool to produce protective gear or respirators.

The debate comes amid a growing sense that the relatively stable situation in German hospitals could be about to become a lot more serious as the virus moves on to the elderly population. Reports from around the country suggest a number of outbreaks in care homes for the elderly.

Take your old trainers to Nike for recycling? Not in Brexit Britain… 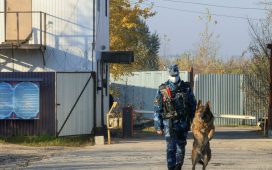