'It was as if life started again': terror attack survivors find new hope


For most of the world, 2020 was a year of disease and death. For Christine Delcros and Sebastien Besatti, survivors of separate terror attacks in London and Paris, it brought love and a desire for life – feelings they thought they had lost forever.

“We know 2020 has been an annus horribilis for most people, but for us it has been a renaissance. A time to live again. It seems crazy to have found such happiness out of such dark times,” Besatti says in an interview with the Guardian.

Delcros agrees: “I thought my heart was broken for all time, that my romantic life was over. Then I met Sebastien.”

The pair, who were brought together by a terror survivors’ group, smile and look at each other. Their scars do not show today, but they are there just below the surface.

For Delcros, 48, a tall, graceful woman with the delicate frame of a classical dancer, the trauma was physical and psychological. In June 2017, she was in London for a romantic weekend with her fiance Xavier Thomas, 45. The couple were strolling across London Bridge heading for the Shard skyscraper to enjoy a cocktail overlooking the city skyline when a terrorist at the wheel of a van ploughed into them.

The force of the impact flung Thomas into the River Thames, from where his body was recovered three days later. Delcros suffered a smashed pelvis and devastating injuries to her legs and back, requiring surgery and months of treatment to learn to walk again.

Besatti, 39, survived the November 2015 attack on the Bataclan, where concert-goers were among 130 people killed and more than 400 injured in a deadly wave of bombings and shootings in Paris.

Afterwards he was revealed to have saved a pregnant woman hanging from a window in a desperate attempt to escape the terrorists. Besatti, who was held hostage and forced to watch as the jihadist attackers continued to shoot at anyone who moved, was physically unscathed but deeply traumatised.

READ  Can we strive for gender equality and still expect guys to pay for the first date?

Sitting in the living room of their small Paris apartment, the pair are kind and solicitous. They have a newfound faith in the world, having emerged from tragedy and darkness into the light, blinking at their own good fortune.

Delcros, on leave from her civil service job with the Paris fire brigade, weeps as she recalls losing Thomas, who was the love of her life. Besatti hands her tissues and gently touches her shoulder. The gesture says: I am here if you need me.

“Xavier had booked a table where we would have a magnificent view. He always thought of these things. But I had a bad feeling, a premonition that something bad was going to happen,” she says.

The couple were staying at the Four Seasons hotel and decided to walk to the Shard across London Bridge. It was 9.30pm.

“It had been a lovely day, but I just kept thinking something was going to happen. Then there was a surreal moment of seeing the lights of a van coming along the pavement and zigzagging so as to hit people. I said to myself, that’s it. That is how one dies,” Delcros says.

It was the latest in a wave of 2017 attacks in the UK that killed 35 people in six months, including 22 at the Manchester Arena. Youssef Zaghba, who was at the wheel of the van, and two other terrorists who leapt out to stab people at Borough Market were shot dead by police.

At an inquest in 2019, Delcros told how she was still “madly in love” with Thomas.

Besatti had been made redundant from his job as a journalist on a local newspaper in Marseille, when he travelled to Paris to attend the Eagles of Death Metal concert with his best friend, Jean-François. Determined not to miss a second of the concert, they had avoided the bar and were standing centre-stage when three gunmen armed with Kalashnikovs stormed the Bataclan.

“The band was playing Kiss the Devil when they started shooting at the crowd. People went down like dominos. I felt a bullet go over my head; there were people dying all around me, bodies all over the ground. I thought: if I stay here I will be shot,” he says.

As the killing continued, Besatti ran behind the black stage curtain. Unable to find the emergency exit, he ran upstairs to the balcony.

“I climbed out of a window but it was too high to drop so I went back in. I noticed a woman hanging into thin air from another window. She was shouting: ‘Help, help, I’m pregnant. Someone catch me.’ Her fingers were slipping and she was going to fall so I pulled her inside.”

Besatti was held hostage with other concert-goers until police stormed the Bataclan, killing the gunmen. “One of the terrorists kept his gun on me while another shot anyone who moved downstairs,” he recalls. “Afterwards, everyone treated me as a hero for saving the pregnant woman, but I only did what anyone would do.”

He and Delcros both struggled to make sense of their lives after the attacks. They first made contact online, exchanging messages on the survivors’ group Life for Paris. Then in March 2019 Besatti invited Delcros to the Alpine ski resort Les Deux Alpes, where he was working in a bar. She accepted.

“It was mad. I didn’t tell anyone. It was as if I’d lost my head. But when I walked into the bar where he was working, it was like a spell. I was under his charm. He held me in his arms and I couldn’t move,” she says.

Besatti says: “I couldn’t take my eyes off her; my life changed in an instant. It was as if it started again. She told me she felt her heart would never love again because what had happened was so brutal, but it was a renaissance for both of us.”

As France went into lockdown, the pair returned to Paris and moved in together. They have been inseparable ever since.

Delcros says the London attack has made her particularly spiritual and that she now feels Thomas’s presence as a guardian angel.

“I felt I would die of grief, that I would never love again. But each time I have been most desperate and in the most despair, he has helped me and answered my call,” she says. “A few days before we met online I asked Xavier for a miracle and he sent me Sebastien like a saviour. I feel Xavier is always with me, looking after me.”

Besatti nods. Is he at all jealous? “I know Xavier is irreplaceable for Christine and she speaks as if he is still alive, but I cannot be jealous of someone who is no longer here to love her,” he says.

They are impatient to escape Covid restrictions, to go out, see friends, visit the coast and surf.

“We are different people now. Before we were in our own personal hell, now we see life. Thanks to Christine I have vanquished my demons. It’s like we have been given a second chance and we are starting a great adventure together,” Besatti says.

Delcros agrees. “We were two lost souls who by some miracle, some magic, found each other. And now we just want to live.” 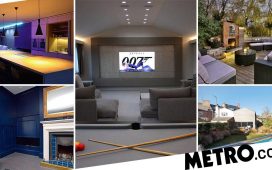 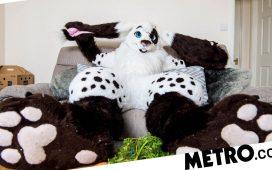 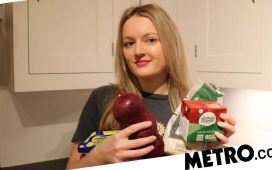 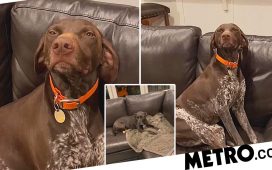 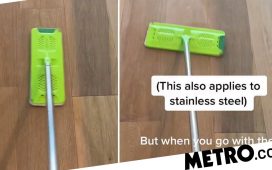