An airstrike launched by Israel on Wednesday has taken out Hamas’ Gaza City commander, dealing a substantial blow to the Palestinian militant group’s leadership.

Bassem Issa is the highest-ranking military figure in Hamas to be killed by Israel since 2014, according to The Associated Press. Hamas confirmed his death in a statement.

The armed wing of Hamas said Issa was killed “along with a few of his fellow brothers of leaders and holy fighters” during the fighting that has been going on for two days in Gaza.

Israel’s internal security agency said a series of airstrikes had killed Issa and several other senior Hamas militants, including the head of rocket development and cyber warfare, the head of rocket production, and the Hamas engineering chief.

Issa and several other commanders responsible for the different districts of the Gaza Strip formed Hamas’ military council, the highest body deciding on the group’s militant operations. The military council is headed by Mohammed Deif.

People inspect the rubble of a damaged building which was hit by an Israeli airstrike in Gaza City on Wednesday. (AP)

Meanwhile, Israeli Prime Minister Benjamin Netanyahu declared Wednesday that Israel will use “an iron fist if needed” to stop widespread protests by Arab citizens that have resulted in injuries, arrests and property damage.

Netanyahu says Israel will “stop the anarchy” after deploying Border Police forces to calm unrest in recent days in the cities of Lod and Acre.

Israel’s president added that the country’s Arab leaders are “giving support to terrorism and rioting” by staying quiet about an outbreak unrest in mixed communities.

Reuven Rivlin said on Wednesday that the “silence of the Arab leadership” over violence in mixed Jewish-Arab communities amounts to “encouraging the rupture of the society” amid the most severe outbreak of violence since the 2014 Gaza war.

Rivlin says Israel “must pursue the rioters with a firm hand (to) restore security and order to all of us, also while fighting terrorism from Gaza without compromise.”

In the Israeli city of Lod, a 52-year-old Arab Israeli and his 16-year-old daughter were killed early Wednesday when a rocket landed in the courtyard of their one-story home.

Lod also saw heavy clashes Tuesday after thousands of mourners joined a funeral for an Arab man who was killed the previous night, the suspect a Jewish gunman. Israeli media reported that the crowd fought with police, and set a synagogue and some 30 vehicles on fire.

Outside of the region, British Prime Minister Boris Johnson said he wants to see an “urgent de-escalation of tensions” between Israel and Hamas.

Johnson tweeted on Wednesday that the United Kingdom is “deeply concerned” and urged leaders to “step back from the brink.” 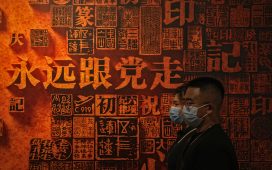 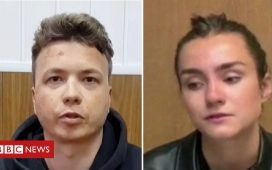 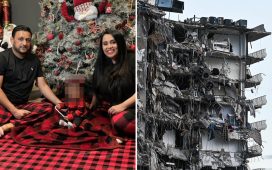