Seven people have died from vaping-related causes because they ‘smoked unregulated liquids’, an expert has said.

It was announced today that a Californian man, 40, had become the latest person to die from e-cigarette-related lung injuries in the US.

But despite several states now banning vape flavours, Public Health England has maintained that vaping is still safe in the UK.

Dr Nick Hopkinson, medical director at the British Lung Foundation, told Metro.co.uk there is ‘no evidence’ that Brits have suffered the same acute reactions to e-cigarettes.

He said: ‘The regulations surrounding vaping are very different between the UK and US.

‘Most of the incidents involving a severe lung reaction have been caused by using non-approved liquids, like cannabis or vitamin E, or non-standard devices.

‘There is no evidence these sorts of cases are happening in the UK. All products are regulated for both quality and safety.

UK regulations currently state that e-cigarette tanks must have a capacity of no more than 2ml, with the maximum volume of nicotine-containing e-liquids in refill containers set at 10ml.

Crucially, e-liquids must contain no more than 20mg/ml in the UK – the amount regulators say is most effective for smokers trying to quit the habit.

While last year, Reuters reported that leading vape brand Juul was selling pods rated at 59mg/ml in the US, which were then imitated by a ‘slew’ of unregulated copycat companies.

The UK also ensures nicotine-containing products are not packaged or marketed to children.

Hero dogs can sniff out cystic fibrosis before it takes hold

This has allowed vaping to remain a tool to help smokers quit, with statistics from June this year revealing 76.9 per cent of British 11 to 18-year-olds had never tried an e-cigarette.

Meanwhile, the US has seen a rise in teenagers vaping, with 50 per cent more school children using e-cigarettes in 2018 than the year previous.

Dr Hopkinson said flavoured vapes have not increased e-cigarettes appeal in the UK as ‘few people take up vaping for fun’.

He continued: ‘Britain’s vapers are mostly adult ex-smokers. It’s a way of meeting their nicotine addiction without giving them all the other thousands of chemicals in cigarettes.

‘Those chemicals are either absent in e-cigarettes or in much lower levels. Smoking is very risky and vaping has a lower risk.

‘Some flavours might be slightly more harmful than others, but ultimately it is going to be less than a cigarette.

‘What’s more, as more research into vaping takes place, that information will be displayed on the packaging and then it will be easy to work out which flavours are safer.’

When describing the long-term effects of e-cigarette usage, Dr Hopkinson continued: ‘We know that on average, a smoker is likely to die 10 years earlier than a non-smoker.

‘Vaping is 95 per cent safer. You could look at it like a someone who vapes would die six-months earlier than a non-smoker instead.’

He added: ‘Although ultimately we want people off smoking and in the long-term, off vaping too.’

An MHRA spokesperson confirmed that e-cigarette products are regulated and ‘must meet safety and quality standards’ before being sold in the UK.

They also stated that many US patients affected by possible cases of lung illness reported using e-liquids that contain cannabinoid products, such as tetrahydrocannabinol (THC).

Recreational use of THC is illegal in the UK.

UK will be ‘back to normal’ and out of Covid lockdown by August, says ex-WHO expert 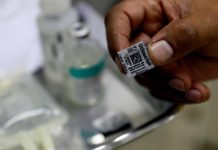 Coronavirus UK: One in 20 London care home residents have died

'My mother was murdered': how Covid-19 stalks Brazil's nurses