Is Manchester United vs West Ham on TV tonight? Kick-off time, channel and how to watch Premier League fixture

With United in second and the Hammers lying in fifth, this fixture would have been an unlikely candidate to have European permutations at the beginning of the season.

The Hammers haven’t won at Old Trafford since Carlos Tevez – who would go on to join the Red Devils – scored the only goal to keep the club in the top flight on the final day of the 2006/07 campaign.

The fixture will kick-off at 7:15pm GMT at Old Trafford.

The match is live on Sky Sports Premier League and Main Event with coverage starting from 7pm.

David de Gea has been described as “touch and go” by manager Ole Gunnar Solskjaer after he returned to England following the birth of his child. Anthony Martial and Marcus Rashford are both set to be assessed before the match, but Edinson Cavani will likely miss out. Paul Pogba, Juan Mata, Phil Jones and Donny van de Beek are out.

Loanee Jesse Lingard is not able to face his parent club, while Arthur Masuaku, Angelo Ogbonna, Andriy Yarmolenko and Darren Randolph all miss out with injury.

The Hammers have struggled at Old Trafford in recent times, which would suggest a United win. However, Manchester United have struggled to find the net recently and with so many injuries to key attacking players, West Ham may prove to be a stubborn proposition. 1-1. 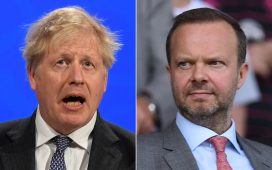