Britain’s coronavirus outbreak may be growing following a spike in the number of people with symptoms over the past week, data suggests.

King’s College London‘s COVID Symptom Tracker app estimates 2,100 people are catching the virus in the community every day — up from 1,400 last week.

The increase is too small to say definitively that the outbreak is growing once again because other, more official estimates put the daily new cases between 1,700 and 3,300 with downward trends.

But the scientists confirmed the epidemic had ‘definitely levelled off’ and claimed cases are only dropping in the Midlands, which contains Leicester – the city still in the UK’s first local lockdown.

KCL experts, working with health tech company ZOE, collected data on symptoms and test results from four million UK citizens between June 28 and July 11. It is one of several surveillance projects tracking the spread of the disease in Britain.

The vast majority of the new cases — 1,843 — are appearing in England, along with 185 per day in Wales and 75 in Scotland. No estimates were made for Northern Ireland.

Data shows the virus is spreading most widely in the North East of England and Yorkshire, which is still experiencing 401 daily cases.

The second worst-hit region is the Midlands, where there are still 363 new daily cases, many of which would have been in Leicester, which has had to roll back its easing of lockdown because of rising infections.

In the North West, 321 people are catching the virus every day. Some extra restrictions came into force in the Lancashire authorities of Blackburn with Darwen and Pendle yesterday because cases are creeping up again.

Professor Tim Spector, an epidemiologist at KCL and lead researcher behind the app, said it was clear ‘the virus is not going away any time soon’ and that his team were monitoring he situation closely.

The data adds to concerns that pubs reopening and lockdown rules loosening on ‘Super Saturday’ earlier this month could cause a spike in infections. 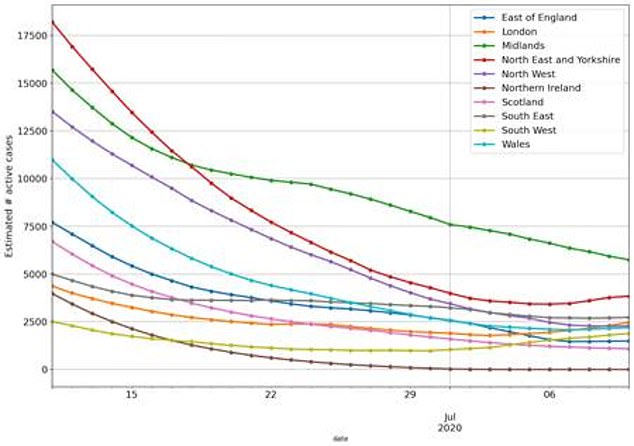 READ  Do autistic people 'get' jokes?

King’s College London ‘s COVID Symptom Tracker app estimates that 2,100 people are catching the virus in the community every day, up from 1,200 last week. For comparison, daily infections were above 11,000 last month

He said: ‘After months of seeing the number of Covid-19 cases falling in the UK, we are now seeing those numbers bottom out.

‘We aren’t surprised to see this happening given the easing of lockdown and more and more people working and socialising.

‘The team is keeping a very close eye on the data in order to allow us to spot any potential new hotspots and pick up regions with a significant increase.

‘The virus is not going away any time so it is really important that people are adhering to the public health messages around social distancing, washing hands, and wearing masks.’ 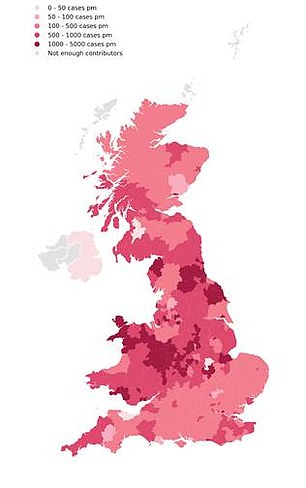 Cases per month: Data shows the virus is spreading most widely in the North East of England and Yorkshire, the Midlands and the North West

Professor Spector said he was pleased that the Government U-turned on face masks and was now making them compulsory in shops and supermarkets.

The team running the mobile app ‘Covid-19 Symptom Tracker’ have been collecting data from people self-reporting symptoms and test results for months.

Data in this week’s update was taken from four million people’s self-reports on their own health, and the results of on 14,429 swab tests taken by app users.

People are asked to log on regularly to report whether they have any signs of illness or whether they feel healthy.

WHICH REGIONS ARE SEEING THE MOST DAILY COVID-19 CASES?

The COVID Symptom Tracker app data has estimated the total number of new coronavirus cases each day in Britain to be 2,103, as on June 20.

This is how the daily cases break down in its estimate:

And for England specifically:

They are asked to get tested if they have symptoms that may be linked to Covid-19, and to report the results of the test.

Because of this, the app cannot reliably track the number of people who are catching the virus but not developing symptoms, which may be thousands more.

The estimate does not include Northern Ireland or care homes, where the virus is still thought to be spreading, meaning the true rate could be much higher.

Scientists behind the app also estimate that 26,020 people in the UK currently have symptomatic coronavirus.

Many patients show no signs of infection whatsoever and are hard to track, so this figure could also be much higher.

This is a significantly higher estimate than the one made by the Office for National Statistics, which last week predicted just 14,000 people – one in 3,900 – would be infected at any one time.

That data, based on eight positive results from tests on 25,662 people, suggested 0.03 per cent of the population of the whole country were infected. It was down from 0.04 per cent last week and 0.09 per cent a week before.

The Midlands is still experiencing the highest number of symptomatic patients, with 5,270 currently suffering from the virus, according to the King’s College project.

The North East and Yorkshire recorded 4,403, while in the North West there are thought to be 3,201 patients with symptoms.

It comes after the Lancashire borough of Blackburn with Darwen reintroduced some restrictions yesterday following a spike in cases.

For the next month, only two people from the same family will be allowed to visit another household indoors in the Lancashire authority and everyone must wear face masks in any enclosed public space. This differs from the national guidance, which says two households of any size can meet inside.

People are also being urged not to hug anyone from outside their own household and to get regularly tested at new mobile centres as part of the measures to avoid a Leicester-style lockdown, which council bosses say is a ‘very real’ threat.

Mass testing began at the weekend after 114 people caught the virus in the last two weeks.

Latest Public Health England (PHE) data shows Blackburn with Darwen has 47 Covid-19 cases per 100,000 population in the last week — second only to Leicester’s rate of 101.3.

Dominic Harrison, the authority’s director of public health, said 85 per cent of the 114 new cases were people from South Asian backgrounds. That’s despite the South Asian community only accounting for 30 per cent of the council’s 150,000 population.

Many other areas of England which have the current highest infection rates of Covid-19, such as Pendle, Bradford, Rochdale and Oldham, also have large South Asian communities.

Public Health England, which develops another regular estimate for daily infections, using deaths and cases data reported to it from hospitals and test centres, this week estimated that there were 3,300 new infections per day.

This was a rise from the team’s estimate on July 1, when it was 2,900, which may be due to the loosening of lockdown restrictions or localised outbreaks like the one in Leicester.

The Department of Health’s testing programme has detected an average of 584 new cases per day over the past seven days, with 538 people diagnosed yesterday.

The PHE estimate of new cases is falling – it was 5,300 last week, later adjusted to 3,600 – but remains higher than estimates from the ONS and the ongoing project by King’s College London.

Stomach bloating warning: The easily overlooked dietary decision that could be to blame

US women more likely to skip medications due to cost

How to live longer: Do this amount of exercise daily to add years to your life

The Guardian view on local leadership in the pandemic: power down | Editorial

Coronavirus symptoms update: Three tell-tale signs you have COVID-19 instead of the flu

Less than 1% of people under 50 treated for COVID-19 in Philadelphia suffered strokes, study finds