Ireland to start reopening schools as it extends other Covid restrictions


Ireland is to start reopening some schools next week but is extending other lockdown restrictions until April to prevent another explosion in Covid-19 cases.

The government has prioritised education and childcare in a cautious new roadmap out of restrictions after a disastrous relaxation before Christmas led to Ireland having the world’s highest rate of infection.

The taoiseach, Micheál Martin, announced the revised Living with Covid plan in a televised address on Tuesday evening.

He praised public compliance with restrictions and said he understood people hoped for relaxations. “The sacrifices you have made have a positive impact – our progress in response to the latest wave is among the best in Europe.”

He said 64% of adults would be vaccinated by May. “We will get through this. I know how hard it is and the toll it is taking on people’s mental health and wellbeing but I also know that the end is now truly in sight.”

The cabinet agreed to extend the maximum level 5 restrictions until 5 April, which means non-essential retail, bars, cafes, construction, gyms and other sectors will remain closed. A 5km travel limit remains in place, as does a ban on household mixing.

Ireland’s 14-day incidence rate per 100,000 population has fallen to 240, putting it in about the middle of Europe’s table, and pressure on hospitals has eased, but authorities fear new, more transmissible variants of the virus will run riot without keeping a tight lid on the economy and society. They have urged the public to keep minimising social contacts.

The government is making an exception for schools and childcare, with phased reopenings. Junior and senior infants and secondary school students facing their final year Leaving Certificate exams can return to class on 1 March.

The state’s early childhood care and education preschool scheme will resume on 8 March, with the rest of primary school classes and fifth year students in secondary school returning on 15 March. All remaining secondary school students can return after the Easter holidays in mid-April.

Business representatives in hospitality and other sectors said this third lockdown was killing companies. The government agreed to pandemic welfare supports until June.

Opposition parties accused the government of confused messaging and leaving loopholes. Sinn Féin, Labour and the Social Democrats want mandatory hotel quarantine for all arrivals, not just those from countries on a list of Covid hotspots.

In Northern Ireland, meanwhile, the Democratic Unionist party (DUP) is urging an earlier return to school than that recommended by health officials.

Arlene Foster, the DUP leader and first minister, urged the Stormont executive to “revisit” the plan after the UK prime minister, Boris Johnson, said children in England could return to school on 8 March.

“Unfortunately our health advisers didn’t think that that was the right way forward,” she said. Peter Weir, the DUP education minister, said health officials were being over-cautious. 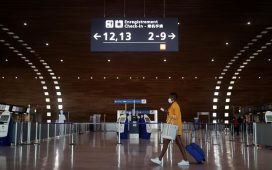 ‘I pray for a miracle’: Frenchman fights to be repatriated from Turkish prison