In one of the bloodiest assaults since the beginning of the civil war, ballistic missiles ripped through the holy building at a military training camp in the central province of Marib.

Officials from the Saudi-backed Yemeni military announced today the death toll had risen to 116 with more than 60 other men wounded, it is expected to rise further.

Yesterday a loud loud explosion was reported over the Saudi border city of Najran after another alleged Houthi missile was intercepted by Saudi air defences. 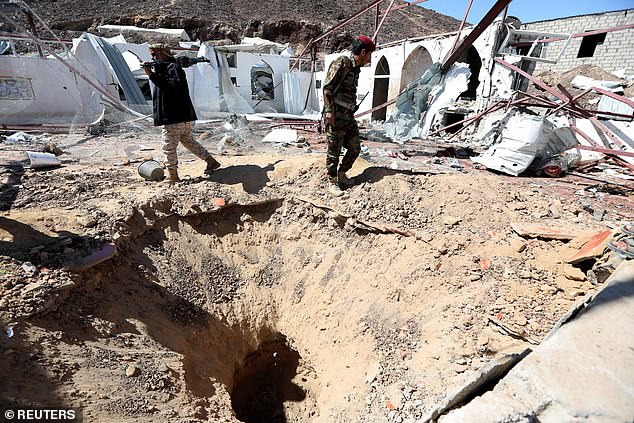 Saudi-backed Yemeni troops inspect the site where a Houthi missile struck a barracks mosque on Saturday night during evening prayers. Today officials announced the death toll had risen to 116 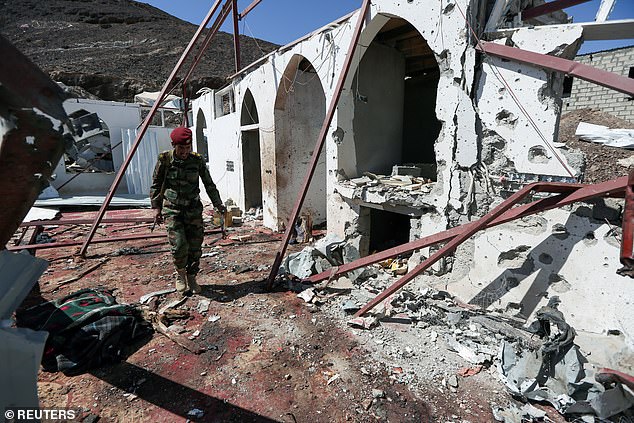 A Yemeni solider inspects the decimated scene on Monday. The death toll is expected to rise further with more than 60 other men wounded in the strike 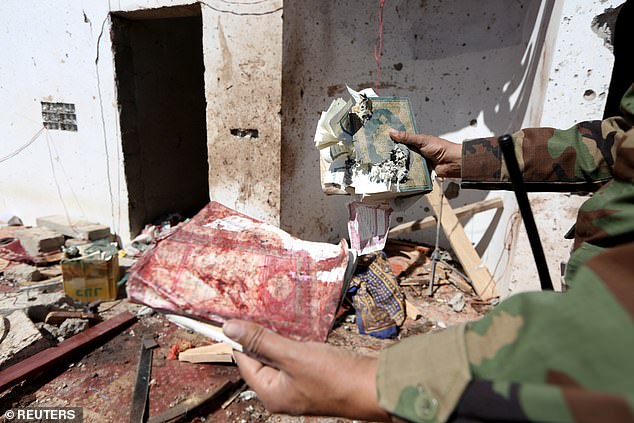 Saudi Arabia’s foreign ministry today said of Saturday’s attack that ‘such heinous, terrorist crimes deliberately undermine the path to a political solution’ in the Yemeni conflict, according the kingdom’s official news agency (pictured: a destroyed copy of the Quran is held by a soldier)

The Iran-backed rebels have carried out a recent spate of barrages on the Saudi-backed troops east of Houthi’s stronghold at Sanaa, the largest city in Yemen.

Saudi Arabia’s foreign ministry today said of Saturday’s attack that ‘such heinous, terrorist crimes deliberately undermine the path to a political solution’ in the Yemeni conflict, according the kingdom’s official news agency.

The assault ‘reflects this terrorist militia’s disregard for sacred places and… for Yemeni blood’.

The United Arab Emirates also condemned the ‘criminal’ attack, saying that it ‘rejects all forms of violence that target security and stability’.

The death toll increased to 116 and is expected to rise, military and medical sources told AFP on Monday.

In recent months, Saudi Arabia started back-channel negotiations with the Houthis in the neighbouring country of Oman, after the rebels claimed an attack on Saudi oil infrastructure that threatened global oil supplies. The United States blamed the attack on Iran, which denied involvement. 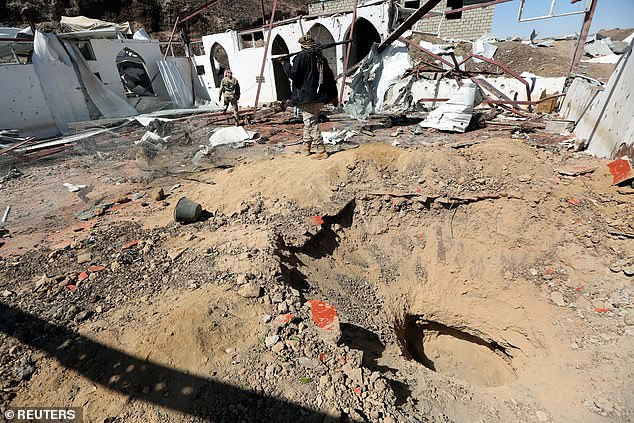 Government soldiers walk at the site of a Houthi missile attack on a military camp’s mosque in Marib, Yemen on Monday 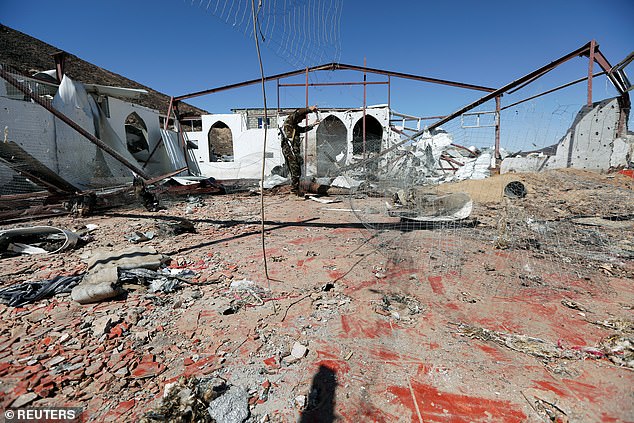 Yemen’s civil war erupted in 2014 when the Iran-backed Shiite Houthi rebels seized Sanaa, and much of the country’s north, ousting the internationally recognised government of President Abed Rabbo Mansour Hadi.

The Saudi-led coalition launched its campaign in 2015 to drive out the Houthis and restore the government of Hadi, now exiled in Saudi Arabia.

The grinding war in the Arab world’s poorest country has killed more than 10,000 people, displaced over 3 million and pushed the country to the brink of famine.

Both sides in Yemen’s war have been accused of war crimes and rampant human rights abuses.

How Alabama blocked a man from voting because he owed $4

'He just wanted dignity': the tragedy that captured the mood of a nation