Global financial markets have rallied as investors seize on signs that the spread of coronavirus in some hotspots may be easing.

The three main US indexes gained more than 2% in morning trading, following a roughly 7% surge on Monday.

Travel firms and retailers, which have been hit hard by lockdowns, were among the biggest gainers.

In the US, Royal Caribbean Cruises jumped more than 30%, while American Airlines was up more than 25%. In the UK, Easyjet rose 20%, while British Airways’ owner IAG rose 12%.

In last afternoon trading in London, 15 companies in the FTSE 100 saw their shares jump more than 10% up.

The FTSE 250, considered to be more representative of the UK economy, was trading more than 5% higher.

Meanwhile, oil stocks also climbed slightly as traders expected an end to a price war between Russia and Saudi Arabia.

Investor sentiment was buoyed by news that the death toll in Spain, which has been badly affected by the coronavirus pandemic, had fallen for a fourth consecutive day, in a sign that the country may have passed its peak.

There was also a slowdown of new infections in Italy, which has also been ravaged by the virus. News that some countries, including Austria and Denmark, have made small steps to relax their lockdowns also helped sentiment.

In the US, New York has also said it is seeing signs that the number of deaths was slowing.

“Investors are reacting to indications that lockdown measures in the UK, US and Europe are beginning to ‘flatten the curve’ of coronavirus infections and fatalities,” said Russ Mould, investment director at AJ Bell.

However, he added: “The market’s relief is only likely to last so long, and attention will soon turn to how countries intend to exit the current containment measures which have in effect hit the pause button on the global economy.”

Despite gains on Monday and Tuesday, the FTSE 100 is still down by 25% compared to its highest level in January, before the pandemic led to lockdowns across Europe and the US.

Adding to the positive financial news were further measures to support economies, including a trillion-dollar package in Japan and central bank moves in China.

And with the ink barely dry on a $2 trillion rescue plan passed by Congress last month, Donald Trump said he favoured another massive spending programme, this time targeting infrastructure projects.

There are also reports that European Union leaders as close to a rescue package for countries worst hit by the pandemic.

EU finance ministers are due to hold a video conference call later on Tuesday, when they are expected to agree to use the eurozone’s $443bn bailout fund.

READ  China's U-turn on market curbs brings back the speculators 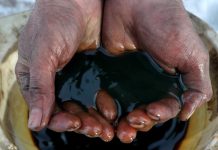