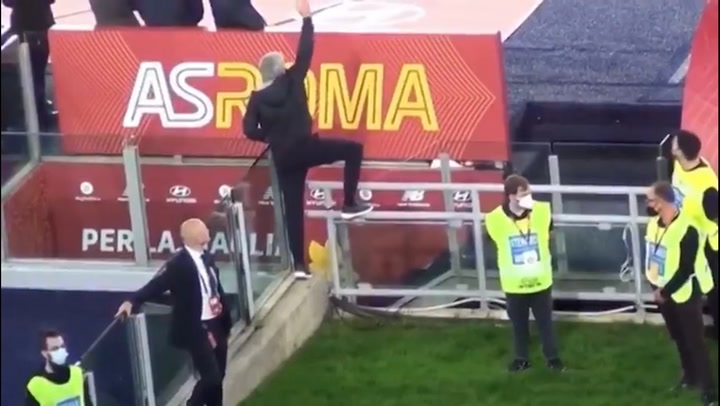 Jose Mourinho sent off during Roma’s draw with Napoli

Hakan Calhanoglu has insisted that he meant to score directly from a corner kick against Roma.

The Inter Milan star stunningly netted from the set piece as the Nerazzurri beat Jose Mourinho ‘s men 3-0 on Saturday.

With just 15 minutes on the clock, the Turkish playmaker, known to posses an eye for the spectacular, tried his luck by swinging the ball towards Rui Patricio ‘s near post.

And, to the surprise of the Stadio Olimpico, it went through the former Wolverhampton Wanderers goalkeeper’s legs to open the scoring.

Speaking to DAZN following the win, Calhanoglu confirmed it was all part of the plan, having been asked if his cheeky attempt was intentional.

Calhanoglu scored directly from a corner against Roma

“Yes, I went for the goal,” replied the 27-year-old. “I always try to go for the near post from the corner flag and this time it went well.

“I am glad at my assist for Edin Dzeko too. Inter dominated the match, we allowed Roma nothing at all, it was a great performance.”

Many labelled Saturday’s display as Inter’s best performance under Inzaghi, who replaced Antonio Conte in the summer, as they restricted Roma to just one shot on target and scored all three of their goals before the break.

That claim was put to Calhanoglu but he dodged the question, instead noting: “We had other great ones too, against Juventus and Milan, regardless of the results being draws.

The midfielder controversially switched sides at the San Siro in June, leaving AC to join the newly-crowed Italian champions.

Having been criticised for his lack of consistency with the Rossoneri, Calhanoglu looks much more settled with his new team-mates.

“I feel more confident now and in really good shape,” he added.

“I want to give my best for the team and the club, the rest comes as a consequence.”

Opposition manager Mourinho was in a far less jubilant mood, though, refusing to take questions from TV pundits as the ex- Chelsea, Manchester United and Tottenham Hotspur boss instead gave a monologue to the camera.

“I apologise to the studio, to the people at home who might be interested in their questions,” the 58-year-old began.

Have your say! Will Inter retain the Serie A title? Comment your thoughts below.

Mourinho is under increased scrutiny at Roma

“Last season, they were 29 points ahead of Roma.

“Today, with injuries and suspended players, it was very, very difficult.

“Our attacking potential was practically nil. It was very important to score a goal, because we would only have two or three chances. We had three and didn’t score.

“When you play with a defence that has Ibanez and various others in positions that are not their usual ones, you still cannot concede the first and third goals. You just can’t.”