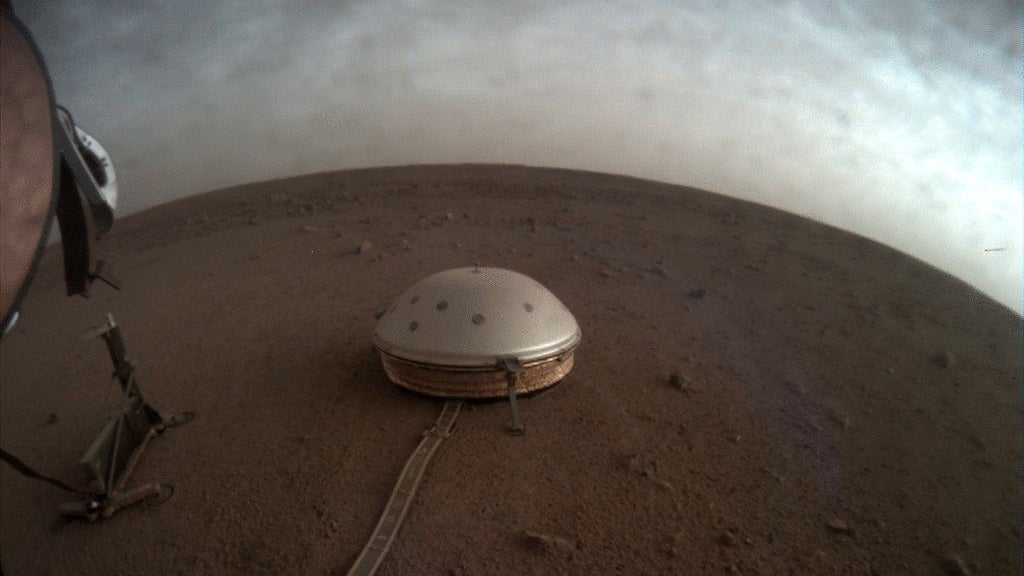 We may have walked on the Moon and sent probes across the solar system, but we know very little about what’s going on inside other planets. Now, for the first time, we have been able to view the interior of one, thanks to Nasa’s Mars InSight probe. The probe, which landed in 2018, is equipped with a solar-powered lander bristling with equipment, including a seismometer (a very sensitive vibration detector).

The results, published in three studies in Science, throw up some unexpected findings about Mars’s interior, including its very large core.

Though Mars has no tectonic plates, the first “marsquakes” were detected within months of the probe landing. These may result from vibrations caused by meteorites hitting the surface or from processes inside the planet.

It is difficult to detect quakes on Mars, partly because InSight’s seismometer is subject to the extremes of Martian weather, with seasonally changing windy periods obscuring the data. The signals that have been used to probe the Martian interior all come from relatively small quakes, the best among the hundreds detected so far.

Planets grow by accretion, that is, by accumulating material early in the life of a solar system. But their interiors are not a uniform mix of these initial ingredients – they also undergo differentiation, where some lighter minerals “float” towards the surface, while heavier components such as iron sink towards the planet’s centre. We expect rocky planets like Mars to have an iron-rich core, followed by a silicate layer called the mantle and an outermost skin known as the crust. Until now, how much of Mars each of these layers occupied was unknown.

It’s impossible to get a sample of Mars’s core. Instead, to estimate its size, we use seismic waves (created by marsquakes). On Earth, the core’s radius was first estimated by finding its “shadow” – an area where the core disrupts the arrival of seismic waves from distant earthquakes. Our study had to rely on a particular kind of slow, sideways-travelling wave, called S-waves, which are reflected back to the planet’s surface by the interface between the core and the mantle.

Careful seismic processing by seismologists from around the world revealed signals from six marsquakes relatively close to the probe. Combined with information from mineral physics and from seismic waves travelling through the mantle, we were able to estimate the size and density of the Martian core. This suggests that the radius is a whopping 1,830km (give or take 40km) – just over half of the planet’s radius, which is bigger than we thought.

The larger-than-expected core suggests that a relatively large proportion of lighter elements must be mixing with its iron. From our work, we now know that the Martian core should contain a high fraction of sulphur and other light elements. Experiments show that liquid iron compounds containing this much sulphur are unlikely to solidify at the pressures and temperatures we expect at the centre of Mars, so it is unlikely that it has an inner solid core as Earth does. This may help us understand why there is no planet-wide magnetic field on Mars today, unlike on Earth.

A planet’s crust comprises a tiny fraction of its mass. But the Martian crust’s chemical and thermal interactions with the atmosphere, and with any water or ice present, helps set the conditions that determine whether life can exist there.

In the second new study, another team investigated seismic waves, which are converted from P-waves – rapid, compressional waves – to S-waves (or vice versa) when they encounter different rocky material. The study assessed background vibrations and gravity to probe the Martian crust, and results suggested the possible average Martian crust thickness is between 24km to 72km. This means we can rule out earlier estimates of up to about 100km.

From more than 100 years of seismology on Earth, we know that beneath the planet’s thin crust lies the mantle, but the mantle itself is not uniform all the way to the core. The upper mantle and the crust, collectively known as the lithosphere, are rigid, while the lower mantle is a solid that can flow. On Earth, it is the lithospheric plates that move as part of plate tectonics, but on Mars, it is unclear what role the lithosphere plays.

To sample different depths of the mantle we can use both direct and reflected seismic waves. Direct P- or S-waves dive deep into the mantle and then return to the surface. The depth they travel down to depends on the structure of the planet and the distance from the quake to the seismometer. Reflected waves return to the surface and then dive again two or three times. A third study identified eight low-frequency marsquakes that produced both direct and reflected waves, and used these to create and test different models of the Martian crust and mantle.

By comparing the data and the models, they found that Mars’s lithosphere is between 400km and 600km thick. This is considerably thicker than any rigid layer seen in the Earth and implies that the Martian crust has a higher concentration of radioactive heat-producing elements than previously thought.

We now know more about the ingredients that went into building Mars, and that it has a very thick lithosphere, allowing our smaller sister planet to retain its internal heat. Though future astronauts won’t have to worry about the small marsquakes we used to probe the red planet, the lack of a magnetic field generated by the sulphur-rich core will mean they and their equipment will need to be more careful of the harsh solar wind.

Our new understanding of the Martian interior is part of a new era of planetary seismology, more than fifty years since the Apollo missions landed seismometers on the Moon. New seismometers will be deployed to the Moon as part of the Artemis mission, while the Dragonfly mission will place a seismometer on Saturn’s moon Titan in the mid-2030s. These experiments will help us understand more about how planets form and evolve – and seeing deep into Mars is just one piece of a solar-system sized puzzle.

‘Like nothing in my lifetime’: researchers race to unravel the mystery of Australia’s dying frogs