At least one person sustained gunshot injury and over 100 houses burnt in a pre-dawn attack on Tor-Damisa village in Donga Local Government Area of Taraba State, by suspected Jukun youths.

Caretaker Chairman of Donga Local Government Council, Mr. Nashuka Ipeyen who confirmed the attack, said investigation was on to unravel the identity of the attackers.

“I got information that some people were attacking Tor-Damisa at about 5:10 am and I quickly alerted security personnel who went and disperse the attackers.

“I personally went there to assess the level of damage and in the process we picked up a teenager who was shot and brought him to the hospital. The boy is safe and is responding well to treatment.

“I have since contacted relevant authorities and efforts are on to deploy security to Donga,” he said.

Former Special Assistant to Governor Darius Ishaku on Youth Mobilisation, Mr. Kura Kurason, who hailed from the village confirmed the attack in a telephone interview with our correspondent in Jalingo.

Kurason said the attackers in their numbers invaded the village at about 4:30 am on Thursday through Rafinkada and shot indiscriminately as the villagers scampered for safety.

He added that while the attack on Tor-Damisa was ongoing, another batch of attackers came from Donga and launched another attack on Tiv villages of Tor-manger and Zaki Ako at the outskirts of Akate.

“In the two attacks over 100 houses and a vehicle were burnt while a teenager was shot and is currently receiving treatment in a hospital.

“This attack is unfortunate and condemnable. We have been holding a series of meetings to bring these attacks to a halt with a view to ensuring the return of peace, yet the attacks are happening,” he lamented.

Our correspondent recalls that there has been ongoing hostilities between Jukun and Tiv communities in Wukari that are gradually spiralling to other parts of the southern zone of the state, claiming several lives and wanton destruction of property.

Insecurity: You have exhausted your excuses, IDFP tells Buhari

Kwara, Saraki to settle dispute over ‘Ile-Arugbo’ out of court 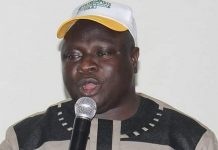