NEWSCABAL
Home » Indian teacher builds Taj Mahal for wife, one third the size of the original one.
world

Indian teacher builds Taj Mahal for wife, one third the size of the original one.


A wealthy Indian teacher has built a replica of the Taj Mahal for his wife – and says their sprawling new home is ‘a symbol of his love’ for her.

Just like the famous 17th century mausoleum – one of the seven wonders of the world – it features towers around the outside and a dome while the flooring and façade are made of marbles from Makrana that were also originally used in the Taj Mahal.

The house, about one third the size of the original building, has four bedrooms, one hall, a library and a meditation room and took three years to build.

Chouksey, who has refused to disclose the cost of the house, said: ‘I wanted to make a unique house in a small town, there are new houses built every year but I wanted to make a house that remains the talk of town forever.’

The original Taj Mahal was built by Mughal emperor Shah Jahan between 1632 and 1653 as a tomb for his wife Mumtaz Mahal on the banks of Yamuna river in Agra, Uttar Pradesh. 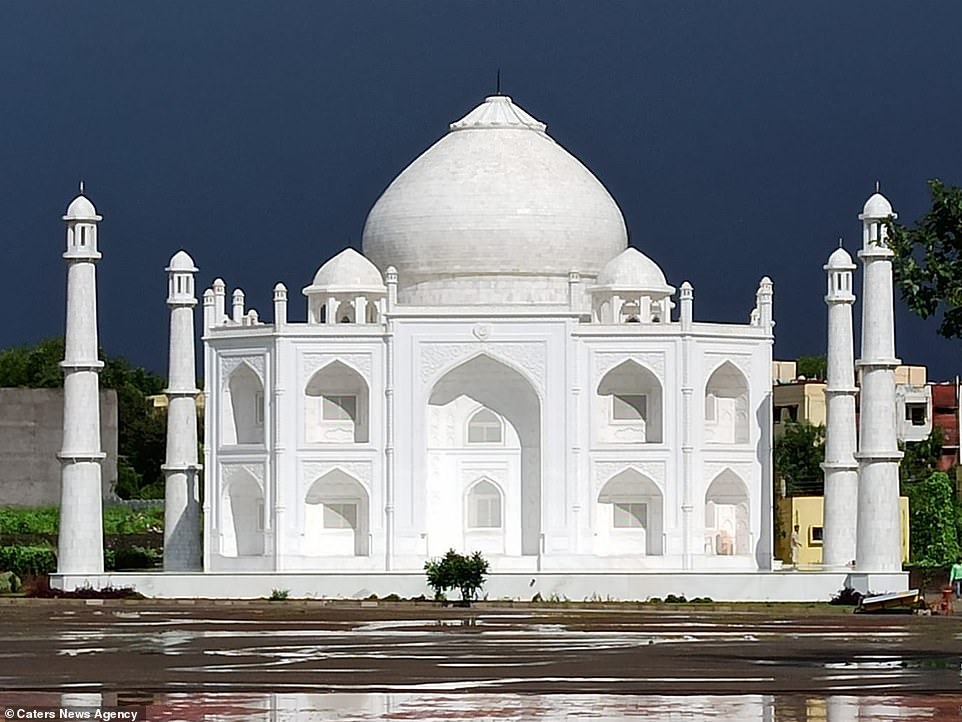 REPLICA: A wealthy Indian teacher has built a replica of the Taj Mahal for his wife – and says their sprawling new home is ‘a symbol of his love’ for her 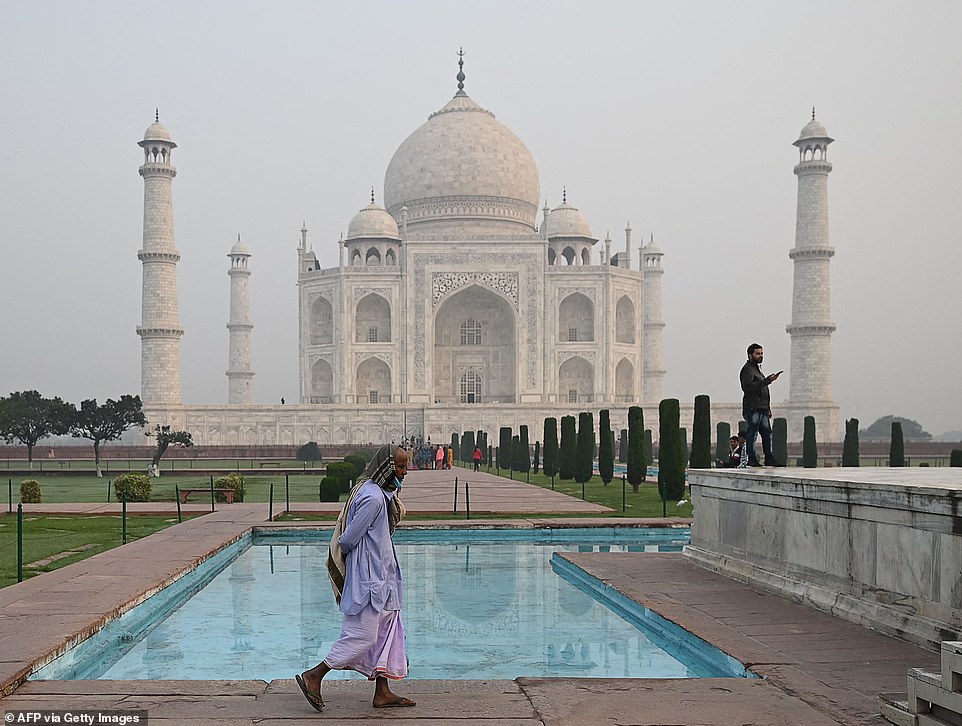 ORIGINAL: The Taj Mahal was built by Mughal emperor Shah Jahan between 1632 and 1653 as a tomb for his wife Mumtaz Mahal on the banks of Yamuna river in Agra, Uttar Pradesh 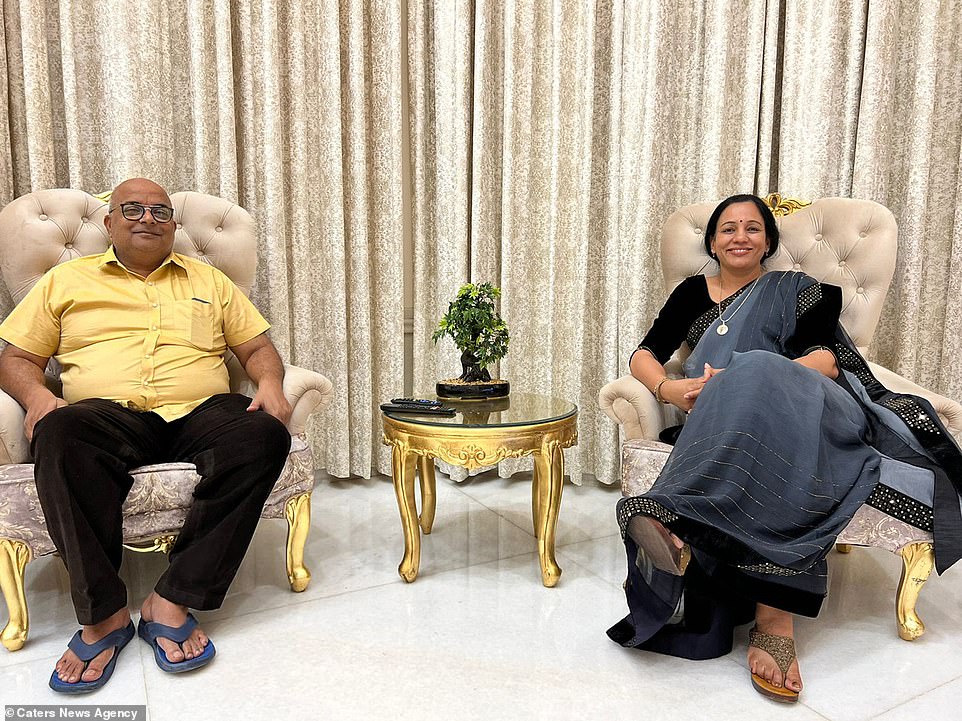 Anand Prakash Chouksey, 52 (left) and Manju Shah, 48 (right) are both teachers who run an academy together 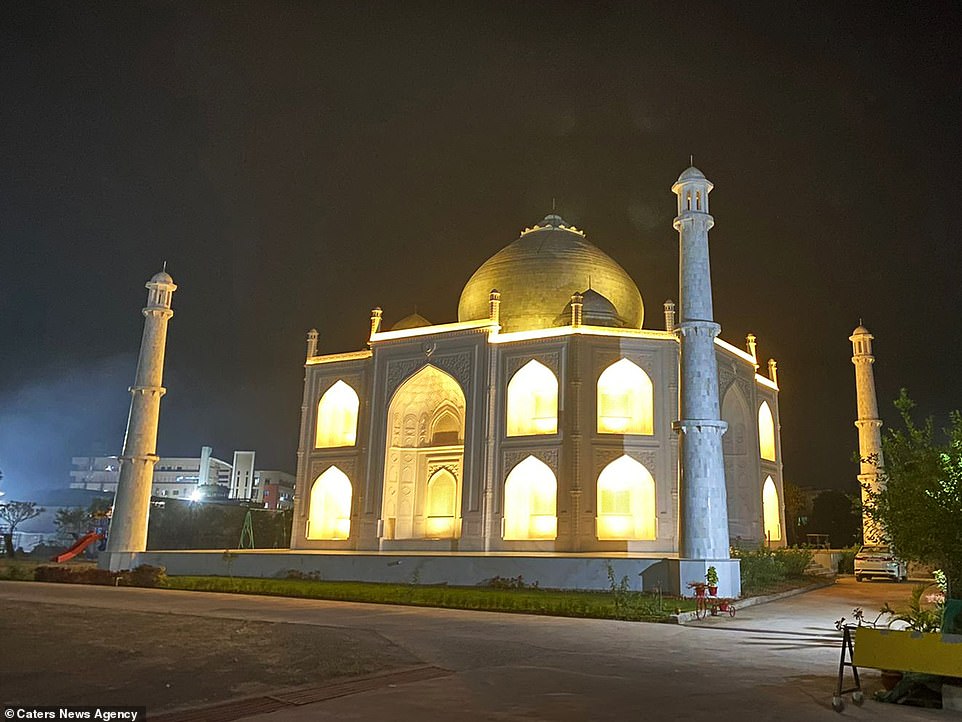 An Indian teacher has built a Taj Mahal replica as a present for his wife. The building is one third the size of the original one 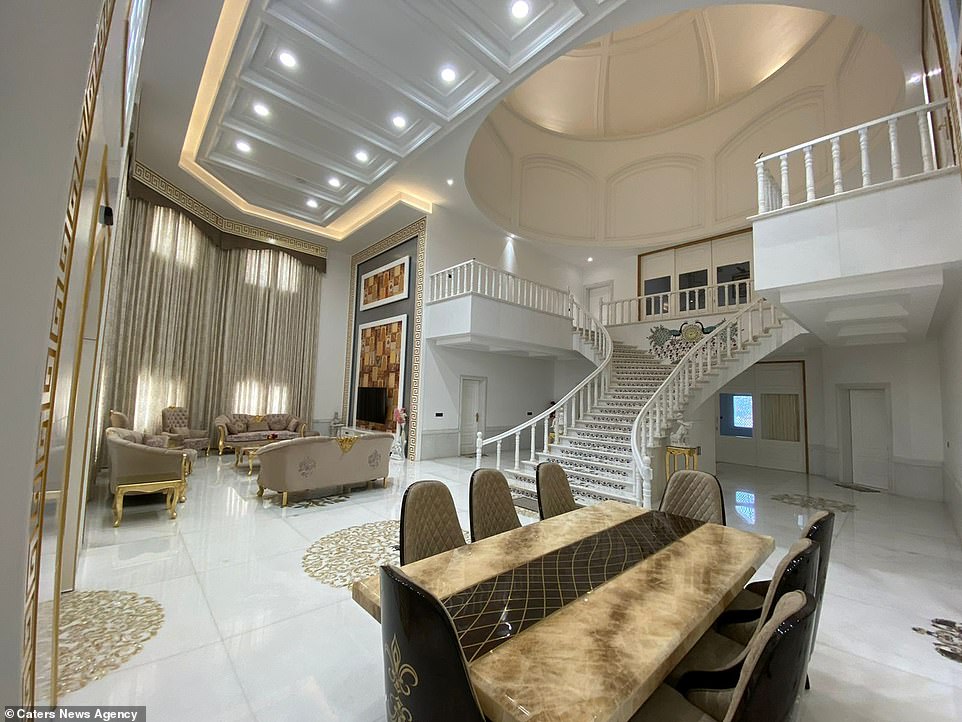 The lavish house is located in the city of Burhanpur. Pictures show the lavish interior of the replica home

‘What better than building a Taj Mahal? This house is a symbol of my love for my wife just like Mumtaaz Mahal,’ Chouksey said of his spectacular home.

The teacher, who went above and beyond to build his wife a house that would remain in the history of his city, worked tirelessly to replicate the original.

The dome of the house is 29ft high, it has towers like the mausoleum and the flooring and façade are made of marbles from Makrana that were also originally used in the Taj Mahal.

THE REAL TAJ MAHAL: A ‘COURIER OF LOVE’

The original Taj Mahal, one of the New Seven Wonders of the World, was built by Mughal Emperor Shah Jahan, who reigned from 1628 to 1658.

The emperor built the mausoleum in memory of his wife Mumtaz Mahal, who died during childbirth. Construction of the architectural marvel began in 1632 and was completed in 1648.

It’s universally been seen to be a symbol of love, described by Bengali poet Rabindranath Tagore as the emperor’s ‘courier of love unconcerned with the ebb and flow of life and death’.

The ivory-white marble building sits on the right bank of the Yamuna River in the Agra District in Uttar Pradesh and encompasses around 17 hectares.

Its main architect was Ustad-Ahmad Lahori but masons, stone-cutters and artisans were brought in from the whole empire, Central Asia and Iran for the building’s construction, which combined the efforts of around 20,000 workers. 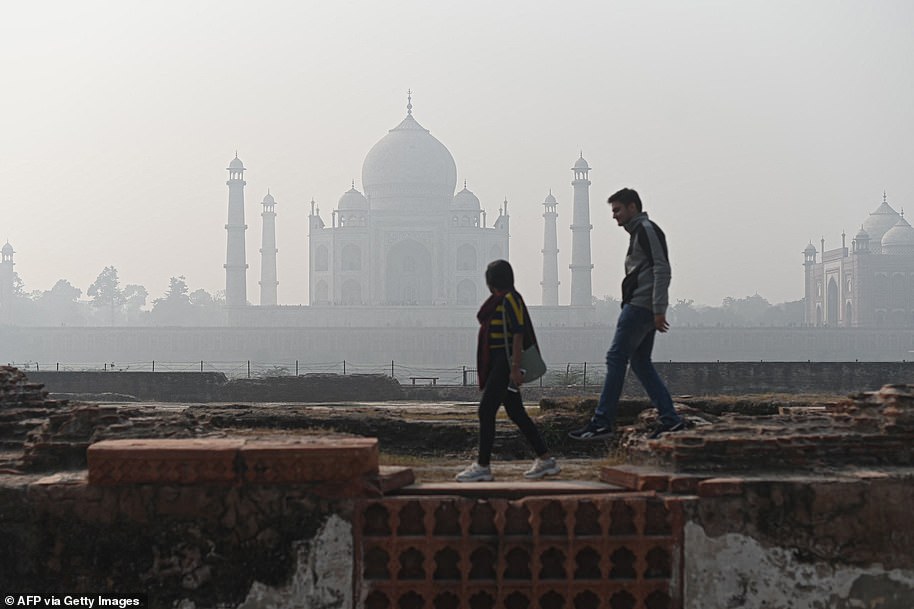 Over the past couple of decades there is increasing concern that pollution and burning trash have been discolouring the Taj Mahal and browning its ivory exterior, a matter worsened by the fact that the government has failed to restore the marble.

In 2018 a petition from the public demanded the monument either be restored or demolished. As of 1996, there’s a ban on the use of coal in industries located in a 10,400 sq km area around the Taj Mahal called the Taj Trapezium Zone (TTZ).

In recent history, the iconic temple has been visited by a number of famous faces, including Facebook founder Mark Zuckerberg, Tom Cruise, Oprah Winfrey, Julia Roberts and Leonardo DiCaprio.

Vladimir Putin, Jacqueline Kennedy, Sharon Stone and George Harrison have also stopped by the famous building over the years.

Donald Trump was pictured in front of the temple in 2020 with his wife Melania, a month after Jeff Bezos and his girlfriend Lauren Sanchez. 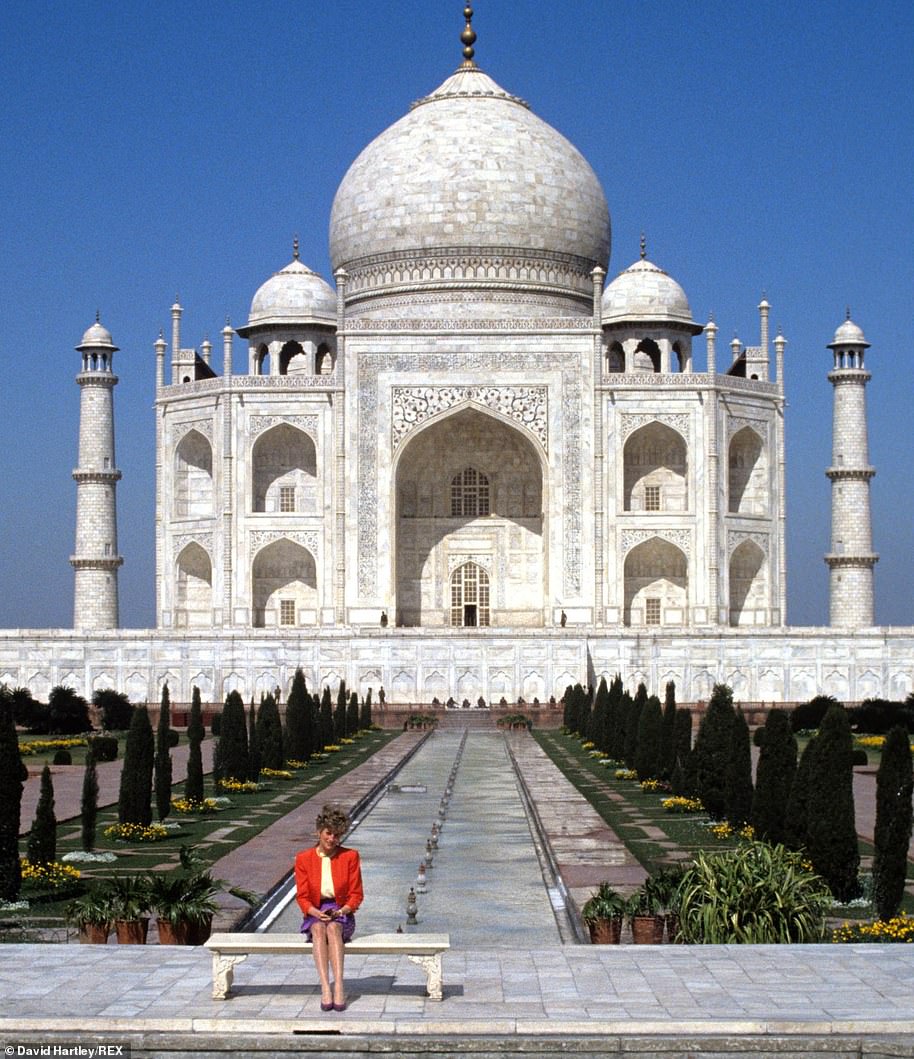 Diana, Princess of Wales in front of the Taj Mahal in 1992. The ivory-white marble building on the right bank of the Yamuna River in the Agra District in Uttar Pradesh encompasses around 17 hectares

Diana, Princess of Wales visited the Taj Mahal in 1992 on a royal tour of India with Prince Charles, and was famously photographed in front of the stunning structure all alone while her husband attended to other business and charity plans.

Diana’s son Prince William took his wife Kate Middleton, the Duchess of Cambridge, to the site 24 years later in 2016.

The Queen also visited the monumental world wonder with Prince Philip in 1961, during the pair’s tour of the Indian sub-continent.

Chouksey said: ‘Mumtaz Mahal belonged to Burhanpur and died here of a prolonged illness. The city is known for that but it would now be also known for the second Taj Mahal.’

The construction of the extravagant house started three years ago, and the couple, who have two children in their early 20s, moved to their lavish abode this year.

Since then, their house has been swarmed by locals and tourists alike.  Many visit in the hope of capturing stylish pre-wedding shoots on a budget. 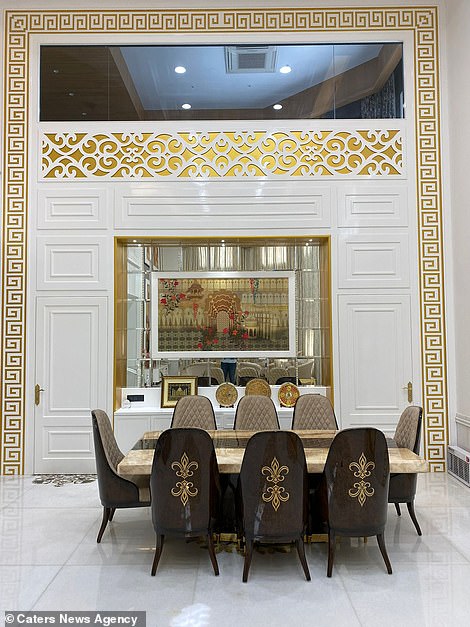 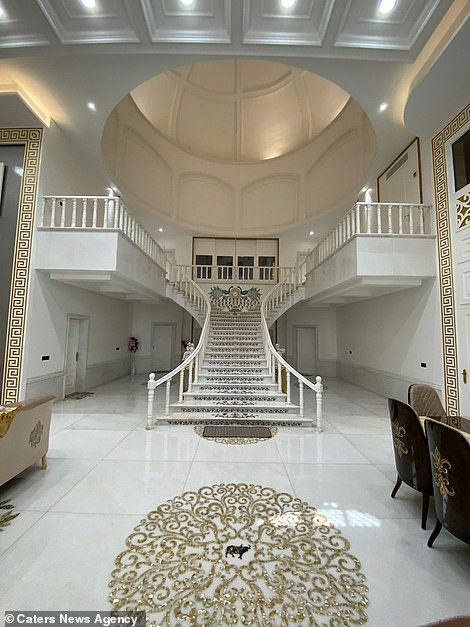 Burhanpur, where the lavish house is located is famous for being Mumtaz Mahal’s original home and the place where she died of a long illness but Chouksey wanted the city to be remembered for more than that 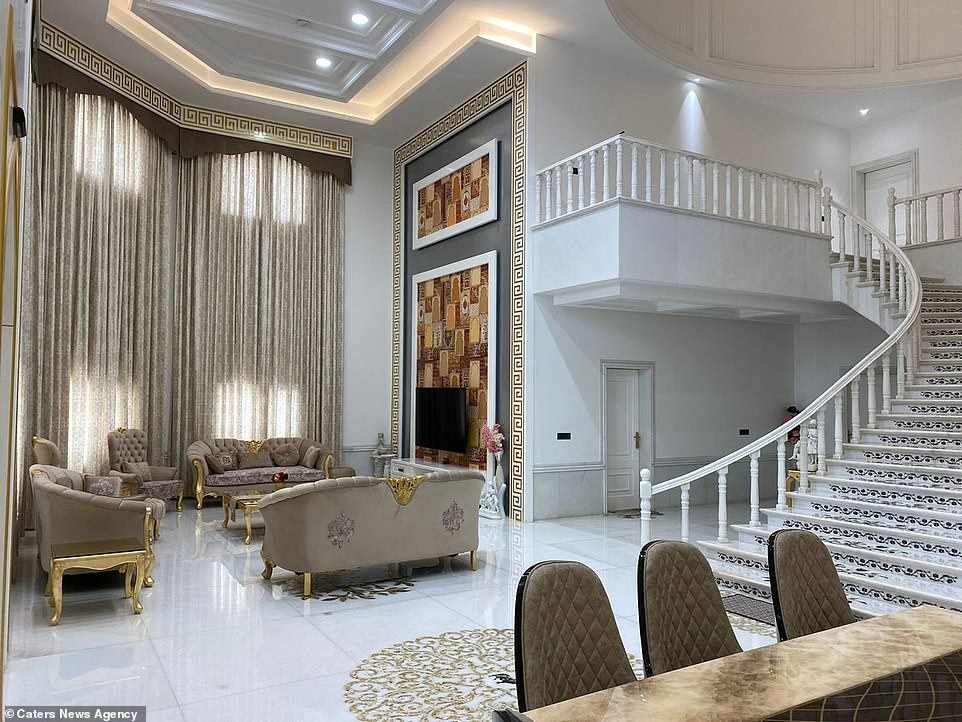 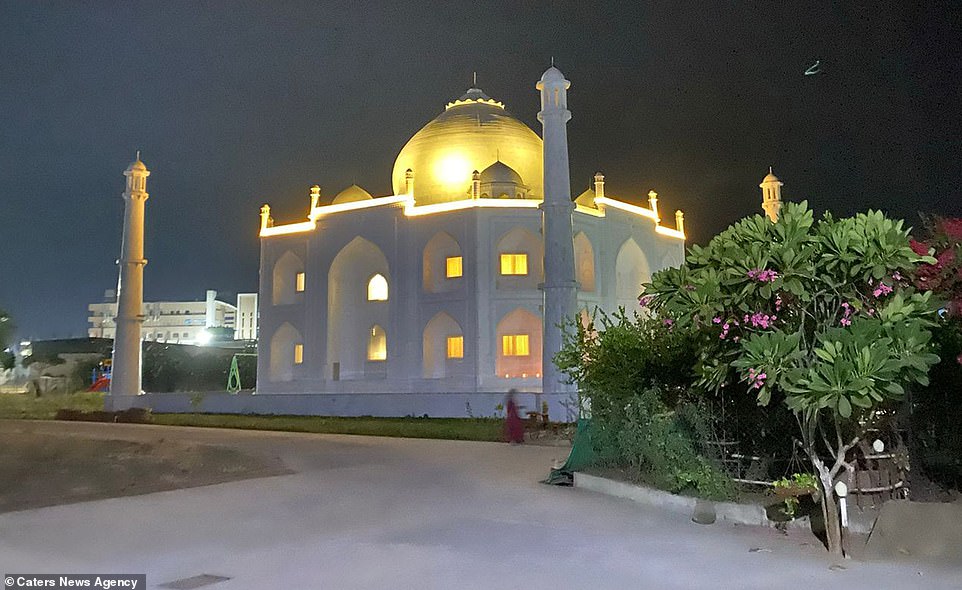 The house which resembles the 17th century mausoleum, is about one third the size of the original building and it is spread across 10,000 square feet 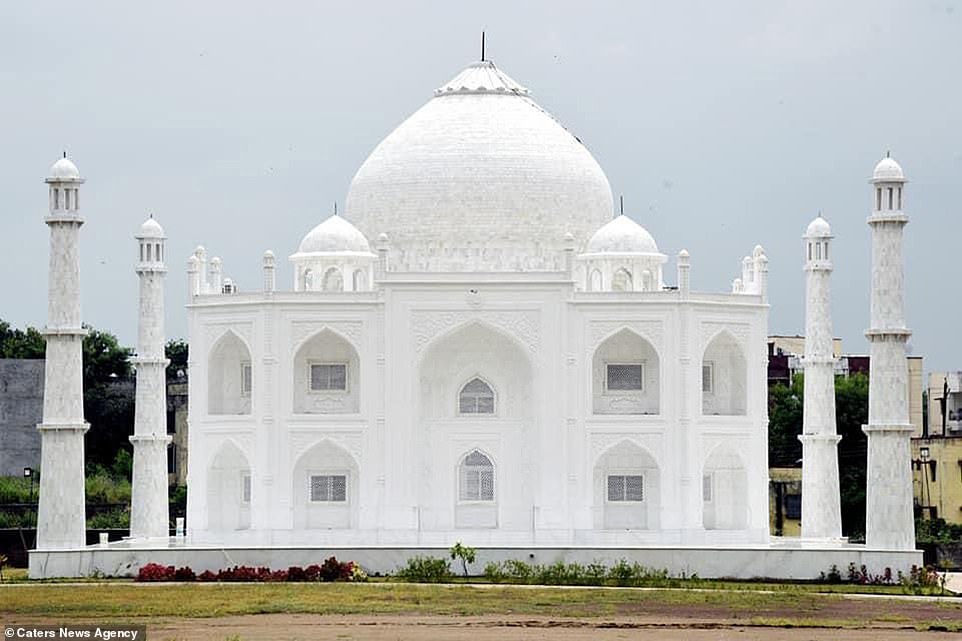 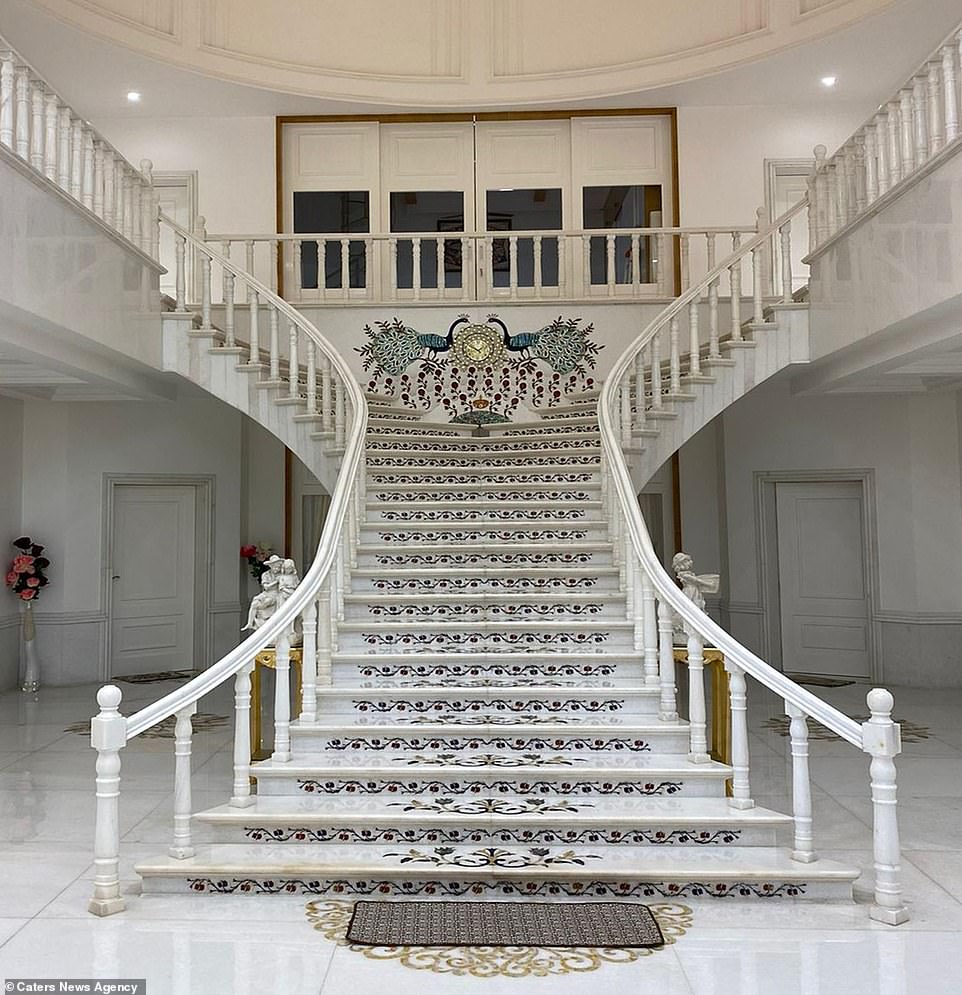 He added: ‘It is a tourist place but now people are thronging to my house to have a look at it.

‘It is overwhelming but I am happy that my wife is happy with the house and we are living here happily.’

To make the building look even more like the original, the lighting both inside and outside the house is done in such a manner that makes it shine in the dark like the original masterpiece.

The engineer turned teacher, who runs an academy with his wife, said he wanted to build a unique home was inspired by the 17th century ivory-white marble monument, one of the most famous and extravagant buildings in the country.

The original Taj Mahal which lays on the banks of Yamuna river in Agra in Uttar Pradesh, was built by Mughal emperor Shah Jahan as a tomb for his beloved wife Mumtaz Mahal. 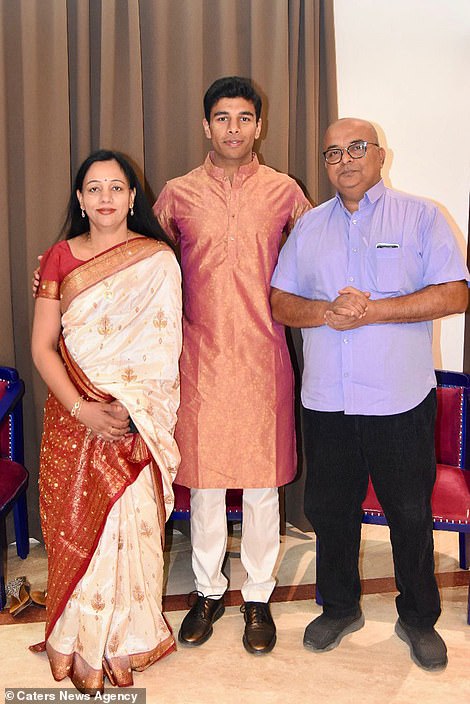 He built it for his favorite wife after she died giving birth to their 14th child. He is also buried there.

The tomb is the centre piece of a 42-acre complex, which includes a mosque and a guest house, and is set in formal gardens bounded on three sides by a crenellated wall.

In front it is what is now called the Diana bench – named after the late Princess of Wales. Diana sat on the bench for photographers during her 1992 visit to the country, shortly before the breakup of her marriage.

The resulting photo of her sitting alone, looking forlorn during a stop at the monument to love, was interpreted as an insight to the state of her marriage to Charles, Princes of Wales, and her solitude within the royal family.

Prince Charles, when a bachelor, had promised to bring his wife to the Taj Mahal. Instead, while Diana visited the monument, he met with local business leaders.

William and Kate, the Duke and Duchess of Cambridge, recreated the photo when they visited the Taj Mahal in 2016 – close to their fifth wedding anniversary.

The duke said the visit was intended to make new memories.