India‘s true Covid death toll could top 1million before the end of the month after doubling in six weeks, researchers in the US have predicted.

Officially, the country has reported just 234,000 deaths from the virus, but most analysts say that is a considerable under-estimate as it only counts deaths in hospital and with a positive test.

Researchers at the University of Washington’s Institute for Health Metrics and Evaluation believe the true toll is likely 700,000, based on a statistical model which partly relies on ‘excess mortality’ data – meaning the number of deaths that occur above established averages.

Based on their calculations, India will top 1million Covid deaths by May 27 having taken until April 12 to reach 500,000 – meaning the toll will have doubled in a little over six weeks amid a brutal second wave of virus. 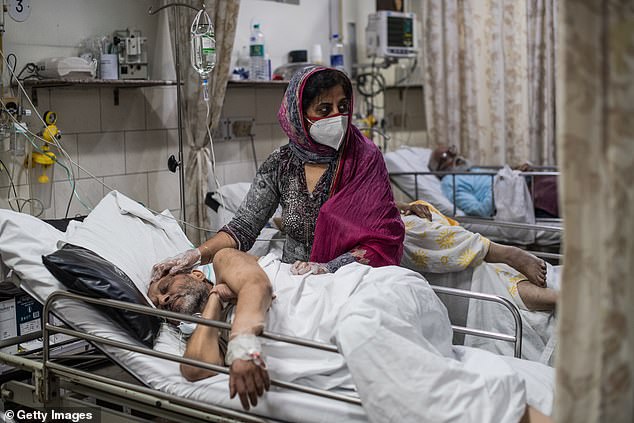 India’s true Covid death toll currently stands at 700,000 and will top 1million by May 27 having doubled in just over six week, researchers in the US have predicted 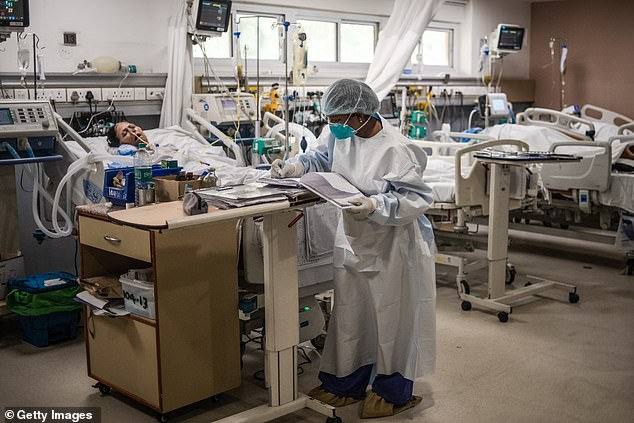 Officially, India has reported 234,000 deaths but most believe that to be an under-estimate because it only counts deaths in hospital with a positive test 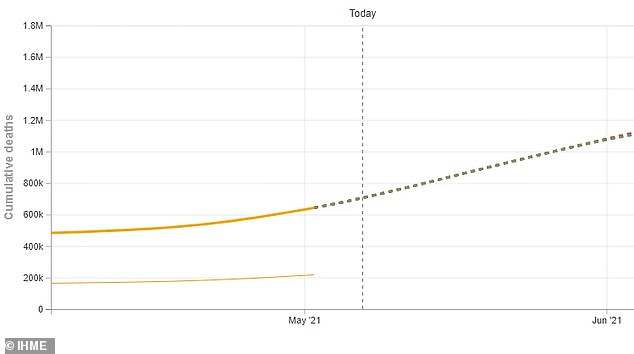 The bottom yellow line shows the official death toll. The estimated true Covid death toll is the larger yellow line in the middle, and estimates of how the true toll will increase in the coming months is shown by the dotted green line

Another model, developed by the Indian Institute of Science in Bangalore, estimates that the official toll could be above 400,000 by early June.

It means India could end up with the world’s highest Covid death toll, even if excess mortality isn’t taken into account.

America currently has the world’s highest official toll, which stands at 594,000.

With daily tolls consistently breaking records, Prime Minister Narendra Modi is facing pressure to declare another nationwide lockdown, as he did during the first wave.

Until now, Mr Modi has relied on individual cities and states to decide their own lockdown measures, while concentrating national resources on distributing medicines and vaccines. 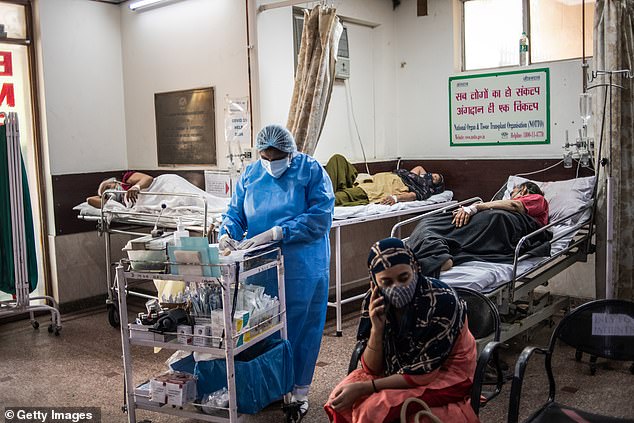 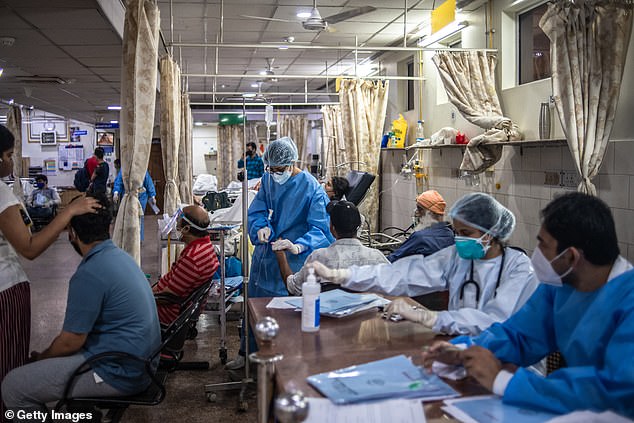 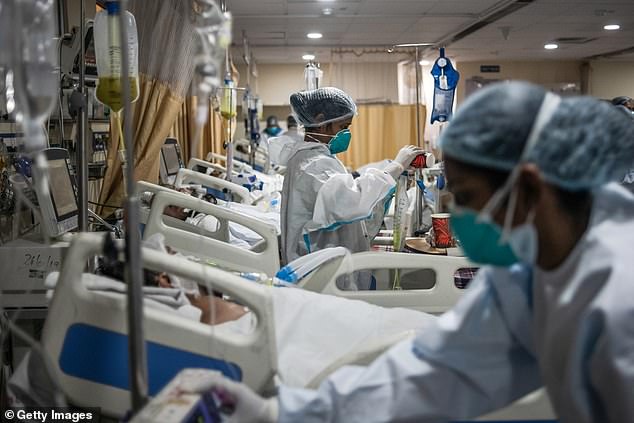 Opponents of Modi, medical experts and judges say there are few alternatives to a second national shutdown as the country’s healthcare system stretches beyond breaking point

But with the crisis showing no sign of slowing and the country’s healthcare system stretched past collapse, medical experts, political opponents and some Supreme Court justices have said nationwide measures appear to be the only solution.

Over the past month, nearly a dozen out of India’s 28 federal states have announced less stringent restrictions than the nationwide lockdown imposed for two months in March last year.

Modi, who held consultations with top elected leaders and officials of the worst-hit states on Thursday, has so far left the responsibility for fighting the virus to poorly equipped state governments.

Dr. Randeep Guleria, a government health expert, said a complete, aggressive lockdown is needed in India just like last year, especially in areas where more than 10% of those tested have contracted COVID-19.

Rahul Gandhi, an opposition Congress party leader, in a letter to Modi on Friday reiterated his demand for a total lockdown, warning ‘the human cost will result in many more tragic consequences for our people.’

He said the government should not worry about the economic cost of a shutdown and provide critical financial and food support to the poor.

Srinath Reddy, president of the Public Health Foundation of India, a public-private consultancy, acknowledged that different states were experiencing different intensities of the epidemic, but said a ‘coordinated countrywide strategy’ was still needed. 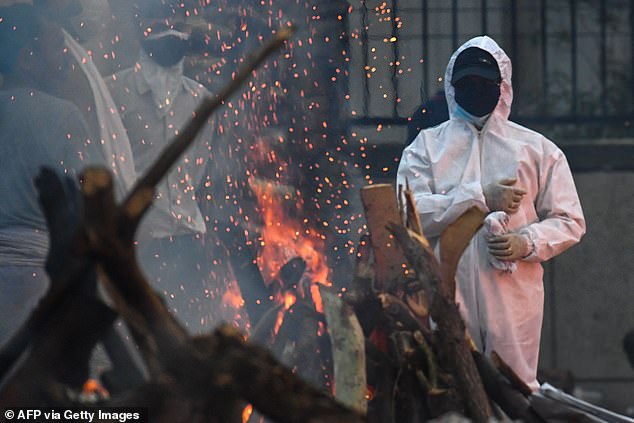 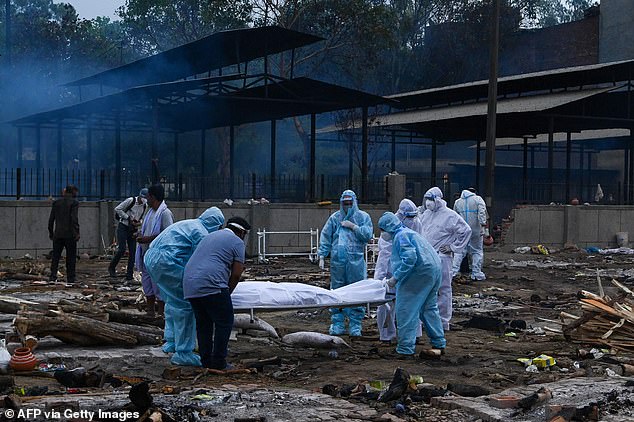 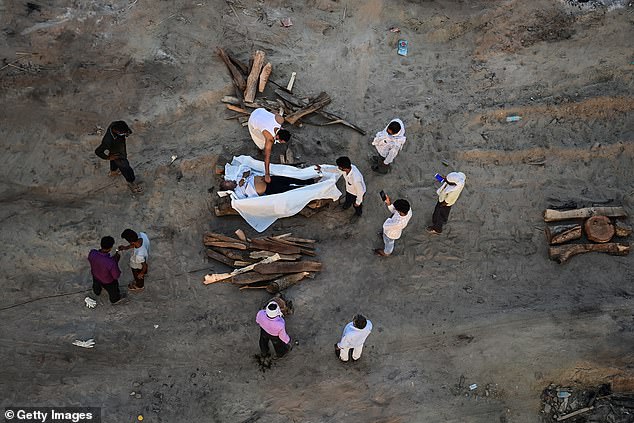 The body of a Covid victim is prepared for cremation at a site in Allahbad, northern India

According to Reddy, decisions need to be based on local conditions but should be closely coordinated by the center. ‘Like an orchestra which plays the same sheet music but with different instruments,’ he said.

Anthony Fauci, President Joe Biden’s chief medical adviser, also suggested that a complete shutdown in India may be needed two to four weeks to help ease the surge of infections.

‘As soon as the cases start coming down, you can vaccinate more people and get ahead of the trajectory of the outbreak of the pandemic,’ Fauci said in an interview with the Indian television CNN News18 news channel on Thursday. He did not provide specifics of what a shutdown should entail.

He said it appears there are at least two types of virus variants circulating in India. He said B117, which is the U.K. variant, tends to be concentrated in New Delhi and that the 617 variant is concentrated in the worst-hit western Maharashtra state.

‘Both of those have increasing capability of transmitting better and more efficiently than the original Wuhan strain a year ago,’ Fauci said.

Modi imposed a two-month stringent lockdown last year on four hours’ notice. It stranded tens of millions of migrant workers who were left jobless and fled to villages with many dying along the way. Experts say the decision helped contain the virus and bought time for the government. 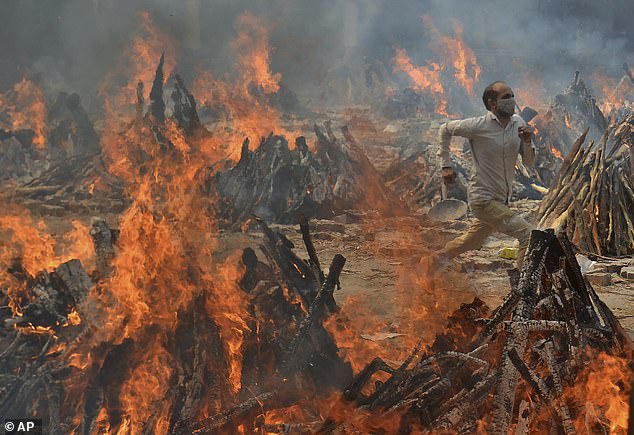 India’s economy contracted by 23% in April-June quarter last year and showed recovery as the restrictions were eased. The International Monetary Fund’s projection of 12.5% growth in 2021-22 financial year, beginning April, is expected to suffer again with the surge in infections.

Modi’s policy of selected lockdowns is being supported by some experts, including Vineeta Bal, a scientist at the National Institute of Immunology. She said different states have different needs, and local particularities need to be taken into account for any policy to work.

In most instances, in places where health infrastructure and expertise are good, localized restrictions at the level of a state, or even a district, are a better way to curb the spread of infections, said Bal. ‘A centrally mandated lockdown will just be inappropriate,’ she said.

Dr. Yogesh Jain Ganiyari of the Peoples Health Support Group, a low-cost public health program in the central state of Chhattisgarh, said that scientifically, lockdowns are the most effective way of curbing infections.

‘But we don’t live in a lab. We need to take into account the humanitarian aspect,’ said Ganiyari. ‘Those who look at lockdowns just as disease control mechanisms are heartless. You have to think about the people.’ 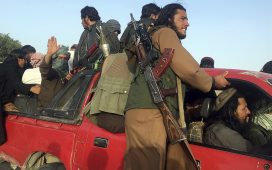 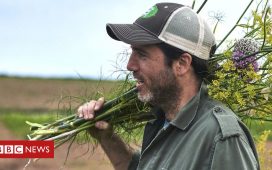 How farmers and scientists strive for more flavour 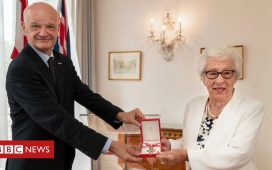