In her second BBC Sport column, England prop Shaunagh Brown talks about the side’s subdued Grand Slam celebrations, marking the Black Lives Matter movement before a match and hoping for a more competitive Women’s Six Nations in the future.

There were only a few beers in sight. We could not properly celebrate because of the pandemic, so it was not the same.

Last year, we won the Grand Slam against Scotland at Twickenham. We all went back to Bisham Abbey – where we train – for a party.

It was loud: there were drinks and music and we were told to be quiet by a certain time by the hotel staff. It was a lot more lively and with more people involved.

This year, we had a big video call with friends and family when we got back to the hotel after the match.

Scrum-half Mo Hunt, who could not play because she had tested positive for coronavirus, put a congratulations video together with our friends and family.

We made the most of what we could but I was up in bed with a cup of tea by 11pm.

With the new lockdown announced on Saturday and the news that community rugby has been completely cancelled for the season, it was a stark realisation that we should be thankful just to play.

‘There have been positive steps on racism’

It was really cool that we did a St George’s Cross during the minute’s silence before the Italy match to mark the Black Lives Matter movement.

Doing the cross was the product of a video call led by former Premiership player James Bailey on racism. All the team gave our views and opinions on the issue as a whole.

Not everyone agreed on issues but it was very open and it felt like a safe space.

From there, we always knew there was going to be a minute in the schedule before anthems to do something. It was up to us whether we would stand in a line, kneel or do a shape.

On the call we said we would think about it and then a couple of days later fly-half Katy Daley-McLean told me they had had the idea of doing a cross.

The fact that somebody else had come up with the idea rather than me doing it was special.

It was just such a relief to know that other people are genuinely talking about these things while someone who’s black or of an ethnic minority is not in the room.

I am guessing that would not have happened before. I felt quite emotional at the time.

The number of discussions I have had over the past few days has been eye-opening. It has been a positive step.

People have wanted to ask me questions and said they would not have known how to ask them a few months ago.

I have openly said that no matter how awkward they think the questions are, I want them to ask me – because if they do not ask me, they will never know.

I feel like we are a bit more together as a team because of that. The fact that we can now talk about such deep issues is nice.

The best thing about the cross was the practice that we had to do for it. Everyone said it looked seamless and that everyone knew where they were going but a lot of preparation went into that.

We had to have diagrams drawn of who was going to stand where. We had to have timings and markers to make sure we were socially distancing while we did it. In our schedule, we had three sessions of ‘cross practice’.

‘I wish the Women’s Six Nations was more competitive’

I do wish the Women’s Six Nations was more competitive, not only to allow better preparations for big tournaments such as next year’s World Cup but also for entertainment reasons and to build the sport.

When people are watching men’s rugby, they see competitive matches. As a neutral, you can watch and enjoy them because there are so many great games of rugby between two great sides.

Being an England fan, it is OK to come and watch us dominate teams – but it is not that fun to watch for a neutral. It would be better for the squad as a whole if there was more of a spread of abilities. 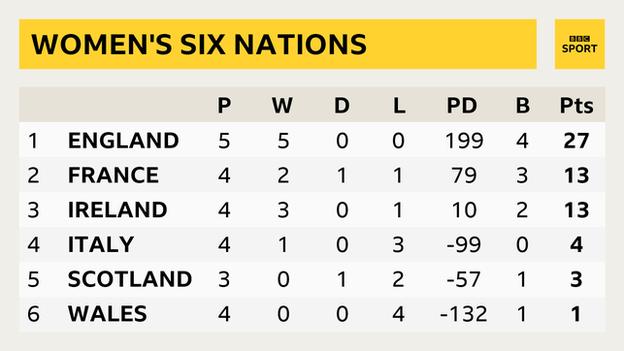 We can only work with what we have got. England are pioneers with having full-time contracts for the women’s XV team. It would be about other teams coming up to us rather than us going down to them.

Getting back-to-back Grand Slams is special. England have done it before but not for a while and not in the lead-up to a World Cup.

It is a good group of players. My mum does not know a lot about rugby but when I spoke to her after the game, even she said: “You’ve got a lot of special girls on that team, haven’t you?”

Having sevens players Ellie Kildunne, Alex Matthews and Helena Rowland come back and bring their flair to it as well – it is a great group of players and it is growing.

We have got a week off now before we face France in two Tests, home and away, but it is back to Premier 15s action with Harlequins on Saturday.

A life in pictures: Diego Maradona