As soon as I woke up to the news of the Commons Education Committee report, I was immediately intrigued, hoping that this would highlight the need for change in our crumbling education system.

However, the headlines about the report focused on one factor: ‘white privilege’, which stood out in glaring, hard hitting words.

According to the committee, poorer white children are underachieving and have been let down and neglected. Well, I certainly agreed with that point.

But it then went on to say: ‘What we also know is that the disadvantaged White pupils our inquiry focuses on do not have “White Privilege” in the education system’.

This was where my stomach lurched, because once again, the phrase ‘white privilege’ was being misused.

The term ‘white privilege’ is in itself problematic. It suggests that white, working class individuals have no struggles at all and that these communities are not deprived, which is certainly not the case.

However, this does not mean that white privilege does not exist. It just means the hardships and challenges faced in these white communities are not related to skin colour.

Perhaps a better term would be ‘embedded advantage’ or ‘structurally enabled’, which is being discussed as an alternative term by organisations such as the MA consultancy. Many prefer it, as it doesn’t have that unhelpful ‘privilege’ tag.

But the MPs behind this report have lazily latched onto this phrase and not focused on the real issue at hand, which is why so many of our children are so underprivileged in the first place.

By referencing ‘white privilege’ as being something these children are not subject to, the report is, in my opinion, being deliberately divisive.

It almost seems like an attempt to pit communities against one another. These are two separate issues – race and class.

It’s possible to be at a huge disadvantage and still not face the inequalities that a person of colour would. Instead of focusing on why our children are being neglected, the report seems to be seeking to divide and polarise us even further. How is that helpful, or indeed forward thinking?

Or perhaps that’s the intention. It appears to be a deliberate misinterpretation of the term, in order to imply that white privilege doesn’t exist. Or maybe it is a tool to stop communities uniting and demanding answers to the cuts in their services and funding. Either way, the only losers here will be the destitute.

I have spent many years working in schools that cover deprived areas. I have supported students that have come from poor and underfunded communities and I have witnessed first-hand the devastating effect that Government cuts have had in mental health provisions, youth services, and more notably education – not to mention the closure of libraries and Sure Start centres.

As always, these cuts and closures hurt the vulnerable and needy the most.

The work I do has influenced the fiction books I write for young adults, which focus on working class families and hard-hitting issues. This was the community I was born into. I grew up on a council estate where we struggled for money.

I was among the first generation of my family to go to university and I have struggled to find my place in the predominantly, white middle class industry that is publishing. However, I am fully aware of my white privilege and know that if my skin colour was different, my journey and experience would have been too.

Our children in the poorest communities are being failed by this elitist and detached Government. It was only last year when they were arguing against free school meals. Sadly, I don’t see their priorities changing any time soon.

It’s much easier for them to ignore the ongoing and destructive issues that are playing out in our most vulnerable parts of society.

It’s far easier to turn communities against each other, stir up hate and bitterness and encourage people to look the other way. I guess their game plan is that we switch off our attention to these mainly Eton educated leaders, and blame our neighbours instead for the state and unfairness of our education system and not demand change.

Unless we ask more from this Government, I fear this divisive behaviour will only continue.

White privilege exists. But white poverty exists too. They are separate issues and they are equally important, but they should never be used to undermine each other.

As long as the Government is inviting the most struggling communities to blame one another, instead of looking at the root cause of their disadvantage, they will continue to convince the white working class into thinking they have their own interests at heart. They don’t.

The fact remains that only the Government and their funding can make a difference. Maybe it’s time to stop focusing on sound bites and pressure those in power to put their money where their mouth is.

Eve Ainsworth is an award-winning children’s author. Her most recent Publication, Magpie (Scholastic) focuses on poverty and belonging. Her debut adult novel, Duckling will be published in April 2022


MORE : The inequalities and anxieties emerging after a year of working from home


MORE : Gap between rich and poor pupils has almost doubled since lockdown

See also  Is the curriculum dividing Northern Ireland's schools along Troubles lines?
Share on FacebookShare on TwitterShare on PinterestShare on Reddit
newscabalJune 23, 2021

Pay freeze for England’s teachers a ‘slap in the face’, say unions 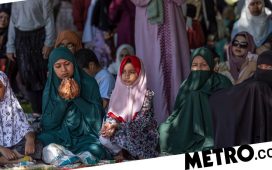