The Inspector-General of Police Special Forces and policemen from the Ondo State Command have moved into the state government reserve with the purpose of hunting for herdsmen, who allegedly killed Mrs Funke Olakunrin, a daughter of the Afenifere leader, Chief Reuben Fasoranti.

The Ondo State Police Command Public Relations Officer, Mr Femi Joseph, who gave this indication in an interview with one of our correspondents in Akure on Sunday, said policemen had been deployed in the state government forest, which the killer herdsmen had converted into their camp.

The police said this on Sunday just as Afenifere, the Ohanaeze Ndigbo and some Middle Belt groups said President Muhammadu Buhari was not showing commitment to security in the South and the Middle Belt.

Olakunrin was killed on Friday at Kajola village in the Odigbo Local Government Area of Ondo State when gunmen ambushed vehicles along the Ore-Sagamu Expressway.

We have made some arrests – Police

Assuring Nigerians that killers of Olakunrin would be fished out, Joseph said, “We are working with the IGP team. The more we are, the more successful we are. As I am talking to you now, our teams are in the bush and we have made some arrests, but we can’t disclose the number because we are still carrying out some investigations.

“We are combing the entire area. If we find anybody with suspicious movements, such a person will be arrested. We will not rest until all of them are flushed out . Our men are already in the forest in order to get the bandits.

“ The work is going to be very comprehensive. Anybody doing any illegitimate work there will be arrested. We are all out now to flush out the criminals. This is not only taking place in the Odigbo Local Government Area, but also in all the 18 local government areas of the state.”

Buhari not committed to security in S’West – Afenifere

Bu the pan-Yoruba socio-cultural group, the Afenifere, accused the Federal Government of not showing commitment to security in the South-West.

The group said Buhari had not demonstrated in the South, the kind of determination he was showing to rid the North of banditry.

The Afenifere spokesman, Yinka Odumakin, who spoke to The PUNCH, wondered why the government was still exonerating and defending the Fulani herdsmen, whom he said were responsible for the wave of killings in the South-West.

Odumakin berated the President’s spokesman, Femi Adesina, for blaming an armed gang for the killing of the daughter of the Afenifere leader.

Odumakin said, “Sunday PUNCH reported today (Sunday) that Fulani herdsmen had taken over the Ondo forest and to come up with that statement (by Adesina) was most unfortunate and a ploy by the Presidency to divert attention.

“Clearly, the Buhari government has not demonstrated in the South the kind of commitment it is showing to rid the North of banditry.”

Afenifere further stated that there was no security on the South-West roads, adding that the police were not investigating Olakunrin’s death.

“We were just coming from Akure. On all the roads, you hardly see security personnel and to shock you, the vehicle in which Olakunrin was killed is now in her father’s compound, not with the police. So, this means they are not carrying out any investigation,” Odumakin explained.

When asked why the vehicle was released, he explained that the car was simply released to the family by the police because no investigation was going on.

The Afenifere spokesman said, “After the attack, the vehicle was parked at a police station in Ore where the family went to pick it yesterday (Saturday). They (police) were not interested in conducting any investigation.”

‘Ondo police have not been investigating herdsmen’s attacks’

He stated that the police in Ondo State had also not been investigating reports of herdsmen attacks, noting that the security agency was reluctant to probe cases of abductions and killings by Fulani herdsmen.

Odumakin added, “We were in an Afenifere meeting last week when a professor said he was attacked by armed herdsmen. He reported to the police but the moment they heard herdsmen, they asked him to go to another station. No policeman was ready to take his statement.”

The group said governors had no control over the security apparatus in their states due to “the unitary structure we are operating.”

On its part, the Ohanaeze Ndigbo said there was really no sign that the President was putting any effort at all to stop insecurity in the southern part of the country.

The Ohanaeze President-General, Chief Nnia Nwodo, in statement signed by his media adviser, Chief Emeka Atamah, said even the efforts in the North were not enough.

“In fact, even the efforts in the North don’t seem to be enough because until some people are arrested and seen to be prosecuted, the deterrent will not be there. There is hardly any discernible coordinated effort at stemming the tide of insecurity in the country as people are still being slaughtered daily.

“The fight against insecurity is both selective and uncoordinated. It is very unfortunate but people have been kidnapped, raped, maimed and killed along the roads, but if it will take her (Olakunrin) death to really bring Nigerians to show greater concern to the issue, then she would’ve died a martyr and saved lives,” he said.

Ohanaeze Ndigbo, which expressed its heartfelt sympathy for Fasoranti, said the “continuous rampaging, plundering, raping, kidnapping and murdering of innocent Nigerians by armed Fulani herdsmen have climbed to a most worrisome crescendo.”

Also, the President-General of the three socio-cultural groups in Benue State, (Mdzough U Tiv, Ochetoha K Idoma and Om’ Ngede), Chief Edward Ujege, berated the administration of Buhari over insecurity in the country.

Ujege said, “The security situation in the country currently is alarming. Things are getting worse by the day. What we had before the present administration was Boko Haram. All the geo-political zones of the country now have security problems.

On the death of Olakunrin, he said, “The killing of the daughter of Afenifere leader shows that nobody is safe in Nigeria.”

Also, the Middle Belt Youth Council slammed Buhari over the worsening” insecurity in the country, saying that his refusal to sack the service chiefs despite their inability to address the situation could only mean that he was happy with the daily killings of Nigerians by Fulani bandits

The President of the Middle Belt Youth Council, Mr Emmanuel Zopmal, who spoke with one of our correspondents in Jos on Sunday, said only Nigerians could protect themselves.

But the Vice-President, Prof. Yemi Osinbajo, on Sunday paid a condolence visit to Fasoranti in Akure. He said the Federal Government would deploy troops to ensure security on the nation’s highways.

He stated, “One of the most important thing is intelligence gathering. That is why we have the community policing system, where policemen would be trained in their own local governments and they would remain there. This is as close as we get to the community policing structure that we expect to have. The other thing of course is that we also are engaging the army, so that there will be a bit of more military presence especially along the roads.”

Similarly, the National leader of the All Progressives Congress, Asiwaju Ahmed Tinubu, warned the people not to allow the herdsmen attacks to divide Nigeria. Tinubu rubbished reports linking herdsmen to the murder of Olakunrin.

The former Lagos State governor while fielding questions from journalists after paying a condolence visit to Fasoranti at his Akure home on Sunday, asked, “How many years ago have we faced insecurity in this country and cases of kidnapping? Is Evans who was arrested, and his disclosure, then a herdsman? I don’t want to be political. The question is where are the cows?”

He said the herdsmen issues should not be allowed to divide the country. Tinubu said, “I am a nationalist and the security concerns and challenges right now must be faced squarely throughout Nigeria. The incident that affected one member of our family, Mrs Olakunri, is saddening and unacceptable but nobody can return her alive, she answered the call of her Creator.”

Also, the National Christian Elders’ Forum, in a statement by its Chairman, Solomon Asemota, condemned the killing of Olakunri.

The organisation comprising over 40 elder statesmen, including a former Minister of Defence, Lt. Gen. Theophilus Danjuma (retd.), also demanded the establishment of state police throughout the country to check the atrocities of the Fulani herdsmen.

Meanwhile, the Deputy Leader of the Senate, Prof. Ajayi Boroffice, asked the police to deploy modern technology and scientific methods in flushing out criminals who were operating from the various forests in Ondo State.

Boroffice, who is representing Ondo North in the Senate, stated this in an interview with one of our correspondents on Sunday.

He explained that since it had been established that the criminals were operating from their various bases in the state, the security agencies should change their tactics.

He said, “The police, intelligence and the space agencies should produce a map that would capture all the forests in Ondo State.

“The space agency should ensure that the satellite shows all the possible locations and hideouts of the criminals.

“It is when all their bases have been identified through scientific methods without their knowledge, that the police can effectively flush them out and secure our people.”

Boroffice lamented the killings and kidnappings of innocent citizens by the yet to be identified groups of people and asked the security operatives to be alive to their responsibilities.

Meanwhile, the Senate also condoled with the family of the Afenifere leader. The Senate described the killing of the 58 -year-old woman as very sad.

The statement signed by the Chairman, Senate ad hoc Committee Media and Public Affairs, Senator Adedayo Adeyeye, said the federal parliament was disturbed by the development.

The statement partly read, “The National Assembly (Senate) is disturbed by the spate of incessant attacks and wanton killings of citizens either by the herdsmen, kidnappers and or other men of the underworld.

“They (criminals) are having field a day in wreaking havoc on the lives and prosperty of innocent citizens in the country. How have we gone this bad,?” it asked.

The Senate emphasised that Nigerians deserved inaneliable fundamental rights from the government.

While condemning the heinous and barbaric acts, the Senate urged the Inspector-General of Police, Mohammed Adamu, to begin massive manhunt for the killers of Olakunrin.

Also, the Speaker of the House of Representatives, Femi Gbajabiamila, described the news of the killing of Olakunrin as shocking.

Gbajabiamila, according to a statement by his Special Adviser on Media and Publicity, Lanre Lasisi, in Abuja on Sunday, said the untimely death of Olakunrin was a huge blow to the family.

However, the Aare Ona Kakanfo of Yoruba land, Gani Adams, berated past and present governors of the South-West for their inability to check insecurity in the zone.

According to him, all his efforts towards convening a security summit have been ignored.

Aare Adams, who spoke to The PUNCH through his media aide, Kehinde Aderemi, said, “The South-West governors, both immediate or past, have failed in their efforts to address the issue of insecurity. For instance, Aare Gani Adams had on several occasions called for a security summit. But they ignored the call.

“However, the recent summit held in Ibadan was inconclusive. They failed to address the salient issues. Aare had always made his position known. He, had even proffered solutions to this problem. So as far as Aare is concerned, the governors need to tackle the problem once and for all.” 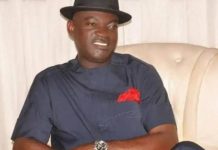