Emily Bradley has lived with anxiety her entire life.

She lives in Cotteridge, Birmingham, with her husband Chris and explains that she’s always experienced anxious thoughts – but it wasn’t until a few years back that she realised they were a problem.

The 33-year-old tells Metro.co.uk: ‘I think I would probably say that I’ve always had a baseline level of anxiety, and I just didn’t recognise it as anxiety until more recently.

‘When I was younger I had worrying thoughts quite a lot and would overthink things, and I had a lot of sleep difficulties.

‘I really recognised it as anxiety about three years ago, I had a lot going on in my personal life and work was really busy and I just started to get really overwhelmed with severe panic attacks.

‘That’s when I started to realise that it was something more than just anxiety that people feel in general day-to-day life – it was more of an issue.’

Emily’s anxiety would often manifest itself as catastrophic thoughts and negative assumptions.

She adds: ‘I spent so much time thinking about “what could happen” when actually none of it did happen – and I would have really negative assumptions as well, like if someone didn’t text me back that must mean that they were upset with me or I had done something wrong – but most of the time it was just because they were busy and had their own lives.

‘Having to challenge those thoughts has been really hard, because I had 30+ years of thinking that way, so trying to reframe things is difficult.’

After trialling different coping techniques, taking time off work and receiving therapy, Emily managed to control her anxiety – and finally started to understand how she was feeling.

But the pandemic brought a whole range of new issues, which Emily found very challenging.

With her family living in the US, this was the first time in her life that Emily was restricted with visiting them. She was also dealing with various other changes the pandemic presented, like working from home and alterations to her job.

Emily adds: ‘My most recent flare up was, unsurprisingly, during the first national lockdown – when everything started kicking off with coronavirus.

‘I have family in the US and that really triggered a lot of stress and anxiety, with the election as well and not being able to travel and see them. I’d never been in a position where I couldn’t just hop on a plane and see them within 24 hours.

‘I ended up needing a bit more time off of work again and started to implement all the things I had learned over the last few years and really got myself into a much better place. I’m very happy to say I’m feeling a lot better now. I feel like I’ve got a better hold of how I can help to manage it.’

During that difficult period, Emily found that getting outside was incredibly important for her own mental health – and still is to this day.

So when Emily heard about Mind’s exercise and fundraising challenge, Move for Mind, she was keen to get involved.

The aim of Move for Mind is to spread awareness and raise money – but it can also be incredibly helpful for those struggling with their own mental health.

People taking part set themselves a goal over a 30-day period – be it running, swimming, walking, cycling or whatever activity of choice – then work towards reaching that target and fundraise in the process.

Emily and her husband set themselves a challenge of walking 60 miles over 30 days, with the aim of raising £150.

She says: ‘Getting out into nature and walking really helps me to manage my own anxiety, but I don’t always want to do it. It is difficult sometimes to feel motivated especially when the weather is bad, or when you’re having a bad day.

‘But I found that it actually really helps me.

‘I did it with my husband, Chris, and we decided we would motivate each other, which I think was really helpful. That’s something I would recommend if you do Move for Mind – to do it with somebody else, as it’s a nice way to spend time together and connect.

‘We made sure that we got out every single day and it was so nice as we saw different parts of our neighbourhood and our local area, because we were taking walks before – but not on a regular basis and we had exhausted a lot of routes that we would normally take. So it made us think about new places we could go.

‘It was a nice time for us to chat through the day, what’s been going on and I think it really helped me with managing my anxiety at the time.’

Emily’s efforts saw her surpass her goal and rack up 70 miles by the end of the period and raise £849 in total.

She adds: ‘I definitely would recommend it to anybody else who might be struggling or just wants to do something to make a difference.

‘It’s beneficial in two ways, depending on what your challenge is (it doesn’t have to be walking, whatever activity makes you feel good) and if you have that motivation in place to do that every single day, knowing that you can help other people as well, it’s going to have a positive impact.’

As well as exercising, Emily has found a number of other ways to help manage her anxiety – but stresses that every person is completely different, so it may take time to find what works for them.

One of the most important things that has helped Emily is to be completely open about her feelings.

Emily adds: ‘I feel like before I would have a problem or a thought and I would ruminate on it for a long time, and then I would never address it – whether it was things at work, or things that were really bothering me – and I would just hold it all in.

She also found going to therapy incredibly useful and practical activities like yoga, breathing techniques and meditation, alongside journaling.

Emily says: ‘I really love writing and always have, so journaling has been really helpful, I’ve filled up quite a lot of journals over the last few years. It’s that release – the thoughts aren’t just in your mind anymore.

‘You can be really open and honest and just write whatever you’re feeling.’

Another takeaway from the past few years is how close physical and mental health are linked – this is something Emily feels incredibly passionate about after struggling with stomach problems and IBS, at the same time as her anxiety.

She says: ‘I did some research and found out that your gut health is really linked to your mental health, and started to see that what was happening physically for me, was really impacted by how I was feeling mentally.

‘I can say now I’m feeling a lot better, I’m not having those flare ups as much. I probably wouldn’t even consider myself to still have IBS anymore, it’s really changed.

‘I think that’s a really interesting thing as well, the link between your physical health and your mental health and there’s so much more that can be done with holistic care for people – not just diagnosing someone with IBS and giving medication, but also thinking where that could have come from and delving into how your mental health could impact that physical ailment.

‘I think they are treated really separately and I think it could be really beneficial to have more of a holistic approach.’

With the arrival of Mental Health Awareness Week, Emily encourages people to keep having open conversations about mental health and to not be too overwhelmed with all the information that’s out there.

Instead find the tools that are right for you.

She adds: ‘I do think sometimes the amount of information out there about how to get support and help yourself if you are struggling can be overwhelming.

‘I’ve read loads of books, listened to podcasts, watched YouTube videos… and they all helped me but I think it took me a long time to realise that these aren’t the magic answers that will make you feel better immediately.

‘Sometimes time is the thing that you need, to work through those things and find out what works for you – to slow yourself down.

‘It’s having those tools and using them when it feels right and not putting pressure on yourself – as that’s just another thing to feel anxious about.’

Find out more about Move for Mind at mind.org.uk


MORE : The TikTok projector window trick could actually be great for our mental health

With a brilliant team that includes Alex Beresford, Russell Kane, Frankie Bridge, Anton Ferdinand, Sam Thompson, Scarlett Moffatt, Katie Piper and Joe Tracini, each of our guest editors have worked closely with us to share their own stories, and also educate, support and engage with our readers.

If you need help or advice for any mental health matter, here are just some of the organisations that were vital in helping us put together our MHAW Takeover: 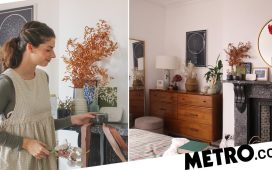 What I Rent: Nancy, £920 a month for a three-bedroom flat in Jesmond, Newcastle 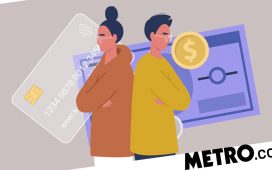 How to stop an ex ruining your credit score 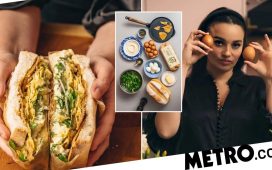