The crime writer Ian Rankin has criticised the “woeful” lack of information on the Covid vaccine rollout for people with learning disabilities after revealing his son is still awaiting his jab.

Rankin, whose 26-year-old son, Kit, has Angelman syndrome and lives in a care facility close to the family home in Edinburgh, accused governments and the media of “ignoring” the learning disabled in an interview with the disability campaigner Nicky Clark.

His intervention comes after the BBC DJ Jo Whiley described the “nightmare” of being offered the coronavirus vaccine before her sister, who has a learning disability and diabetes.

Asked about the case at first minister’s questions on Wednesday, Nicola Sturgeon promised that people with learning disabilities would be invited for vaccination from next week.

She said her government was considering whether it needed to take further action but added that “a range of people with learning disabilities” are already classed as extremely clinically vulnerable and were thus included in the 140,000 of that group already vaccinated. “[Others with learning disabilities] will be offered the vaccine as part of cohort six and invitations should start to be issued from next week,” she said.

Rankin later told the Guardian that he “would question the first minister’s interpretation and the advice given to her”.

He said: “Where Kit lives, his housemates are in and out of hospital all the time – I would say that makes them extremely vulnerable. It is hard to see how any health professional or scientific adviser could decide which group Kit or anyone else belongs to without seeing them and making an assessment.” He added: “The lack of information for carers and families has been woeful.”

Angelman syndrome is a genetic condition that affects the nervous system and causes severe physical and learning disabilities.

In the interview with Clark, Rankin said: “The learning disabled have been ignored by governments and the media. We keep being blithely told that care homes are at the top of the list and everybody in care homes has been treated and you are thumping the table going ‘no they’ve not’. The most vulnerable are people with learning disabilities and my son has not been vaccinated yet. Perfectly healthy 60 to 65-year-olds in Scotland are being vaccinated but not my son or the other people in his facility.”

He said he had not been told where or when Kit could expect the vaccine, adding that the dearth of information was “very frustrating” and indicated a “lack of joined-up thinking”.

He described how his son had been shielding in the care facility where he has been unable to hug visitors since the beginning of last March. Praising Kit’s “phenomenal” carers, he said his son had lost out on trips out, physiotherapy and other therapies that previously gave his day structure and interest.

He said Kit, who he described as “incredibly sociable and tactile”, was allowed home for one night at Christmas, the first time he had been able to leave the facility since last February. “That was the first tactile contact we’d had with him. Now we’re back in lockdown again and it’s back to seeing him through the gate or over the wall.”

According to latest estimates from the Office for National Statistics, for those with a medically diagnosed learning disability the risk of death from coronavirus was 3.7 times greater for both men and women than for people who did not. People with a “severe or profound” learning disability are in priority group six for the vaccine, which is being targeted now.

Brazil variant could ‘reinfect 60% of Covid sufferers and be twice as transmissible’, studies warn

Lung cancer: Finger clubbing could be an early risk indication – what is it? 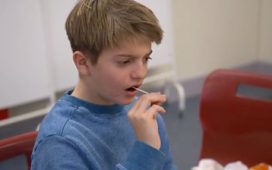 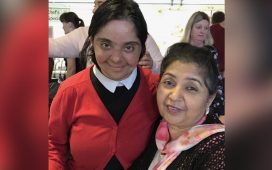