My Sunday school teacher explained to us when I was just eight years old: ‘If any of you lie with a boy or girl like you, you will die the same way the people of Sodom and Gomorrah died.’

She went on to tell us about how God disliked homosexuals, and how people who practiced homosexuality are abominations.

From that day on, I began trying to pray the gay away – and this continued until I was about 13.

For a young gay kid growing up in Bénin, I didn’t know what to do except turn to God because I believed that I wasn’t following the right path. Knowing what I know now, it breaks my heart that I did this because I thought something was broken in me that needed to be fixed.

During my childhood, the church played a major role in my life. Even though my parents were not entirely driven by it, uncles and aunties around me were.

I have two uncles who are bishops and pastors respectively, as well as an aunt who is a deaconess. When I stayed with my aunty for a year, her golden rule was to worship God and love him with all your heart.

So every Sunday morning, she’d dress me up and we’d go hand-in-hand to church. This was a routine, and it was one that I actually dearly loved.

I loved how I was always given new clothes to wear and getting to show them off in church was always something to look forward to.

As a child, I even dreamed of becoming a pastor because I thought I had a deep understanding of Christianity.

I always knew something was different about me though. So when I found out the word to describe what I was feeling – how it was considered an abomination – I did everything to change.

Every time I was at church, I’d lie on the altar and pray. Every night, I’d kneel down close to my bed and pray.

My wish was always the same thing: ‘Dear God, change me. Make me not to be like this.’ When I began to realise that this prayer would never be answered after my attraction to the same-sex didn’t stop, I began to actively try to change myself.

I got a girlfriend when I was 14 to try to prove to myself that I wasn’t gay but also to stop people at school making fun of me for never having kissed a girl before. She was older than me by two years and I thought that going out with her would force me to be straight.

Throughout our relationship, I felt bad because deep down, I knew I was lying to her and only really using her to prove I wasn’t gay.

Three months into our relationship, a new boy started at school and I couldn’t ignore the things that ran through my mind. I found myself wanting to run up to him and kiss him.

Knowing that the feelings were never going to die, I resolved myself to live with it – even though I still felt I was dirty for not liking the opposite-sex – and I broke up with her.

By the time I was 16, I began to come to terms with myself. It started with me stumbling on a Facebook group－I can’t exactly remember the name－that was for people who were questioning their sexuality.

Then I searched for articles, stories, videos, and slowly, it became a pill I was able to swallow. One article in particular stood out to me – it was a piece listing 10 reasons why God loves gay Christians. That’s when I really started to question whether the church had my best interests at heart.

Researching into homosexuality gave me the confidence to start posting queer memes on my WhatsApp status for everyone to see, as well as write queer stories. My friends slowly began asking me questions, and one by one, I came out to them if they asked.

Eventually, a few cousins and some classmates found out – then suddenly everyone was talking about it.

Some people actually stopped talking to me and I was sad because I realised that they didn’t really love me as a friend, but also oddly happy because I knew that I was probably better off without them.

Not long after this, someone sent a voice note to my friend asking her why she was still friends with me. He told her that he’d beat me up the next time he saw me because, according to him, I was sick and flaunting my illness.

Everyone suddenly knowing and talking about my sexuality scared me because I feared they were going to out me to my parents and I wasn’t sure how they’d react. I had no idea what they thought of gay people.

Instead of waiting until someone else told my parents, I decided I would be the one to break the news.

When I came out to my mum a few months after my 18th birthday, she simply responded, ‘I have always known.’ I was so overwhelmed with happiness and so glad I did it.

Although I could see the doubt, sadness and fear in her eyes, the way she hugged me and promised not to ever stop loving me was so comforting. I knew she meant it.

The final hurdle to my coming out journey was trying to reconcile my sexuality with my church. I kept attending services because I wanted to keep the religious people around me happy.

But four months after coming out to everyone, I was sitting in church when the pastor said ‘LGBTQ+ people are trying to change our children, turn them against God and nature, and make them sinful.’

Hearing this was annoying and I wanted to get angry, but I couldn’t. A lot of people in the congregation were going to believe everything the bishop said and then have resentment towards LGBTQ+ people.

He went on about the satanic kingdom and the new world order to make everyone gay. Even though I sat through the service, I knew I was not leaving the same way I came.

I didn’t want to be in a church that saw people like me as abominations or sinners – that had pastors preaching hate against me.

I’m a Black gay Nigerian man with enough problems on my plate – my faith won’t be another one.

My relationship with the church changed drastically. It first started with me not going on weekdays, then I stopped participating in church activities.

I believe Christianity actually preaches love and then the church goes against that by using the bible to justify the abuse for LGBTQ+ people.

I am not an atheist though. Since I grew up with religion playing a big part in my life, leaving everything about it behind is a long process.

I’m just trying to live each day knowing that I have people who care about me.

By sharing my story, I want to be able to show younger queer people growing up in religious households that they’re not abominations. They should be supported, valued and respected in society – no matter who they love.

If I had that representation growing up in a religious household, maybe I wouldn’t hold such resentment to the church I once considered devoting my life to.


MORE : I wish I had been raised without religion


MORE : I don’t have an issue with straight actors playing gay roles but The Prom got it so wrong


MORE : I lost my family, friends and religion after coming out, but it was worth it to be myself 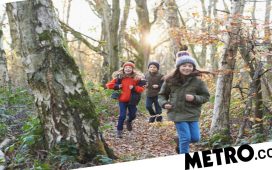 10 cheap nature activities to do with kids in lockdown

I’m painting the amazing Galápagos wildlife – from my sitting room

Sunday with Tom Watson: ‘Since I left politics, I’ve been given Sundays back’

In the quietest times, the garden consoles