Men have evolved to be taller than women because oestrogen, the primary female sex hormone that also governs bone growth, peaks earlier in females, a study claims.

High levels of oestrogen released by the ovaries during puberty cause young women to experience a growth spurt that usually peaks in their early teens.

However, oestrogen levels are lower in boys and peak several years later on average, allowing their bones to continue growing for longer, so they end up taller.

British naturalist Charles Darwin suggested in his 1871 book The Descent of Man that sexual selection was the main reason for the general differences in size between males and females.

The success of the strongest men in the ‘struggle for life’ and competition for a mate meant the tall and sturdy male gene was passed down, he wrote.

However, the different hormonal output of ovaries and testes affects bone structure and can more accurately account for the physical differences, an American anthropologist argues. 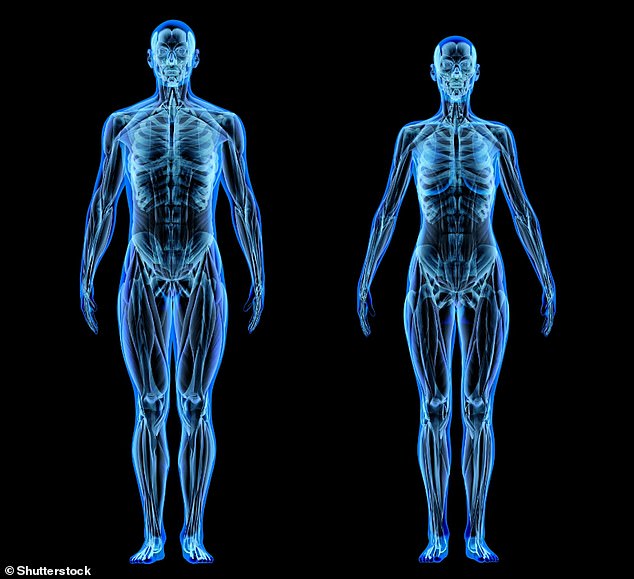 ‘There’s a lot of importance put on our differences in body size, as if that’s the keystone fundamental sex difference,’ Holly Dunsworth, a biological anthropologist at the University of Rhode Island, told Quanta Magazine.

‘This is what people think is fact, and if you don’t agree, they think you’re denying science.

‘The burden of proof for sexual selection is so much greater than people realise.’

Evolutionary explanations for skeletal sex differences focus too narrowly on ‘big competitive men’ and ‘broad birthing women’, she said, which also fits with popular conceptions of how men generally differ from women.

But the competition in males could be a consequence of difference in bone size caused by oestrogen, rather than a cause, she claims. 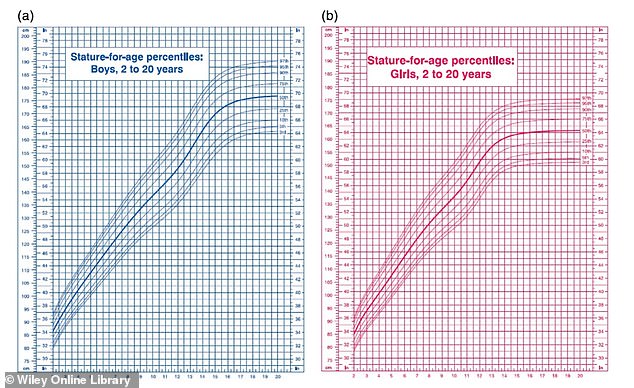 Stature of boys (left) and girls (right) as time progress. The X axis shows ages and the y axis height in inches and cm. The female growth curve flattens sooner in girls, this sample of American adolescents shows

Taking a US sample of adolescents, after nearly the same growth trajectory from two years of age, both males and females were shown to be roughly 62 inches tall at 13 years.

But after that, the female growth curve flattens to reach the average final height of about 64 inches, less than the male average of 70 inches.

While children of both sexes initially grow at the same rate before puberty, ovaries ramp up oestrogen production during puberty, which stimulates bone growth plates.

Growth plates are the areas of new bone growth in adolescents and their growth adds length and width to the bone.

Human babies are born with unfused and more flexible bones to allow for continued growth and the ability to squeeze out of the mother’s birth canal.

Unfused bones also serve to reduce injury when a baby has an accident.

The fact that ovaries ramp up oestrogen production and stimulate the growth of bone plates can explain why teenage girls are generally taller than boys of the same age.

However, high levels of oestrogen also make bone growth plates fuse together, putting a halt to the growth spurt.

People with ovaries experience a peak in oestrogen soon after puberty, once their ovaries ‘start to kick in’ and contribute to the monthly cycle, Dunsworth said.

On the other hand, the bones of people with testes continue to grow for several years until their oestrogen peaks, so they end up taller.

Men produce oestrogen in the testes and the adrenal glands, although at lower levels than women.

The female pelvis also expands more than males’ due to two hormones – oestrogen, responsible for the regulation of the female reproductive system, and relaxin, produced and employed by the tissues of the pelvic region released from the placenta during pregnancy.

During bone development, a female pelvis expands more than that of males due to oestrogen and relaxin produced and employed by the tissues of the pelvic region.

Fetal pelves, between seven months and birth, display sex differences that already hint at those in adults, Dunsworth said.

And around the transition to adulthood, the female pelvis tends to fuse earlier than those of males at all sites, mirroring general sex differences in bone fusion.

And the fact that these differences exist – ones that can’t be explained by sexual selection – show Darwin may have been wrong in his 1871 classic ‘The Descent of Man’. 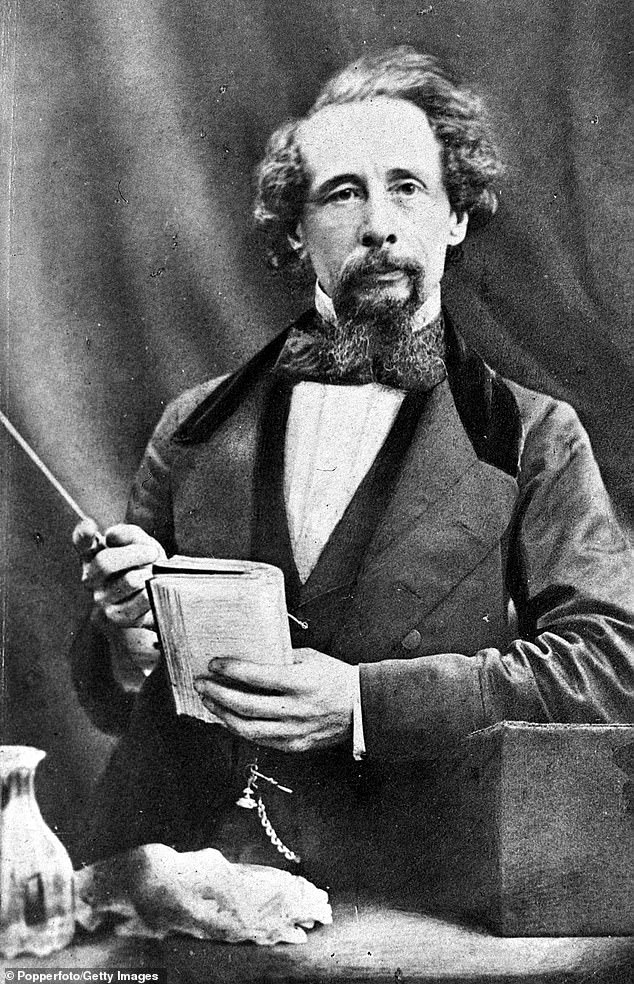 Darwin said: ‘There can be little doubt that the greater size and strength of man, in comparison with woman, together with his broader shoulders, more developed muscles, rugged outline of body, his greater courage and pugnacity … have been preserved or even augmented during the long ages of man’s savagery.’

Sexual selection likely has contributed to height differences between the sexes, but other possible explanations need to be explored, Dunsworth stressed.

‘We often have this notion that male bodies are the default and women’s bodies are a deviation from that default.

‘If we don’t start with one body as the default, we look at how these processes lead to sex differences, then you can start testing hypotheses much better.’

Her research paper has been published in Evolutionary Anthropology.

CHARLES DARWIN ON THE DESCENT OF MAN

‘There can be little doubt that the greater size and strength of man, in comparison with woman, together with his broader shoulders, more developed muscles, rugged outline of body, his greater courage and pugnacity, are all due in chief part to inheritance from his half-human male ancestors.

These characteristics would, however, have been preserved or even augmented during the long ages of man’s savagery, by the success of the strongest and boldest men, both in the general struggle for life and in their contests for wives; a success which would have ensured their leaving a more numerous progeny than their less favoured brethren.

It is not probable that the greater strength of man was primarily acquired through the inherited effects of his having worked harder than women for his own subsistence and that of his family; for the women in all barbarous nations are compelled to work at least as hard as the men.

With civilised people the arbitrament of battle for the possession of the women has long ceased; on the other hand, the men, as a general rule, have to work harder than the women for their mutual subsistence; and thus their great strength will have been kept up.’