HSBC to buy back $2bn of stock as profit surges 74%


HSBC announced a $2bn share buyback and posted a 74 per cent increase in third-quarter profit, making it the latest global lender to turn bullish on the economic outlook nearly two years after the start of the pandemic.

Earnings were given a big boost by a $659m release from its reserves for potential bad loans — 85 per cent of which were related to the UK — as fears about a wave of company bankruptcies faded and growth rebounded.

“We are seeing multiple signs the UK economy is back,” chief financial officer Ewen Stevenson said on Monday, citing higher credit card spending, mortgage growth and modest default rates. “We have to watch the end of the furlough scheme very carefully . . . [but] we have good confidence on a strong recovery.”

HSBC’s situation is a marked swing from a year ago, when the bank’s provisions for bad debts exceeded $8bn at the peak of coronavirus lockdowns, eventually pushing down annual profit by 45 per cent.

The lender has written back $1.4bn of these reserves so far in 2021 and signalled there was more to come before year-end, but it retains an additional $1.2bn in contingency funds to cover the impact of the pandemic.

“Last year we had a combination of being full flight in middle of Covid with no vaccine in sight, plus Brexit on horizon, so we had a pretty cautious position,” Stevenson said.

As one of the world’s largest deposit-taking institutions, HSBC also stands to benefit from forecast interest-rate rises as inflation gains pace. Stevenson said that a 0.25 percentage point increase in UK rates alone would add $500m of income per year.

“We feel like we are turning the quarter on revenue after absorbing the impact of interest rates,” chief executive Noel Quinn said. “We believe that the lows of recent quarters are behind us.”

HSBC’s overall third-quarter pre-tax profit jumped to $5.4bn from $3.1bn a year earlier, beating expectations for $3.8bn. Revenue rose for the first time in two years, climbing 1 per cent to $12bn, but analysts at Citigroup flagged concerns about “sluggish” loan growth in Asia, where Covid restrictions remain tighter than in the West, particularly in Hong Kong, the bank’s most important market.

The shares rose 0.2 per cent on Monday and are up about 15 per cent this year. However, the stock has fallen 30 per cent in the past five years weighed down by ultra-low rates and east-west geopolitical tensions.

The $2bn buyback builds on an interim dividend announced in August of 7 cents per share, worth about $1.4bn. The bank’s core capital level of 15.9 per cent remains significantly above its regulatory minimum, leaving space for more shareholder returns or bolt-on acquisitions, Quinn said. 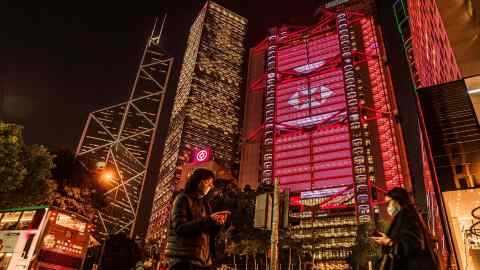 HSBC is in the middle of a big overhaul of its sprawling global operations. It plans to trim $4.5bn in costs, cut 35,000 jobs and shift $100bn in risk-weighted assets to Asia.

This year, it has sold its lossmaking US consumer operation and French retail bank and pledged to invest $6bn to expand its Asia wealth business.

The bank said its “pivot to Asia” was boosted in the quarter by strong equity trading activity from wealthy clients in the region and volatility in Hong Kong and Shanghai stock exchanges.

The bank’s historic base of Hong Kong accounted for about a third of profit, or $1.7bn. Stevenson said the economic outlook for the Chinese territory had worsened compared with six months ago but that “as vaccination rates continue to increase we will see a bumpy but sustained recovery”.

HSBC’s reliance on Hong Kong has left the bank trapped between rising trade tensions between the US, the UK and China.

“We’re seeing a ‘de minimis’ impact on business day to day as a result of geopolitics,” said Stevenson. However, he acknowledged it had weighed on the lender’s share price as investors had been shunning the stock due to the increased risk associated with its operations.

HSBC also sought to calm investors about its exposure to Chinese real estate in light of the liquidity crisis at property developer Evergrande, after it emerged one of its funds had recently bought bonds of the company.

The bank disclosed that it had $194bn of drawn risk related to mainland China, of which $19.6bn was real estate related. It has now sold out of the Evergrande notes.