Maurice from Sheffield hasn’t seen his feet for four years. Thanks to the miracle of television (How to Lose Weight Well, Channel 4), I have and can confirm that they remain in Yorkshire and attached to the rest of him.

The bigger mystery is how Maurice and his equally overweight pal Mick can realise their dream which, for some misbegotten reason, is to complete the Yorkshire Three Peaks Challenge six weeks’ hence.

In Maurice’s case, this means he must do downward dogs in his garden and foreswear fry-ups. The TV doctors who came up with this plan called it the Yoga Diet, but you could call it the Just Shoot Me Now diet and it would be equally effective.

Mick and Maurice were among six Britons put on different short-term regimens so cumulatively complicated that I’ll be posting graphs and spreadsheets worked up by the Guardian TV department’s statistics unit shortly. There were fasts that made you cry, protein-rich meat diets that made you smell and vegetable ones that made you envy the lifestyle of the Mongolian yak. Presenters Dr Helen Lawal and Dr Javid Abdelmoneim yelled imperatives, “No raw after 4!” and “ You snooze, you lose … weight!” at their charges with the charm of a Heathrow cavity search.

Debra and Lesley, sisters from Essex, went on diets the show associates with the weight loss of Rebel Wilson and Adele respectively, proving that nothing is worth doing unless someone famous is connected to it. Lemmings now jump off cliffs only if a Lemming Love Island contestant has shown the way. The diet Adele is reported to have followed, composed mostly of liquidised kale so far as I could tell from the show, helped the singer lose seven stone, but had an hallucinogenic effect on Lesley. Just like Emerald City in the Wizard of Oz, everything looked green she said. What Lesley didn’t realise is that you’re supposed to pour the stuff down the sink not drink it.

It was Temi I felt most sorry for. Her lockdown workstation is the kitchen table. While she juggled work and the logistical difficulties of a diet involving alternating fasting with eating to trick her metabolism into burning calories, family members roamed behind her scouring cupboards for crisps and made sumptuous Nigerian meals. “Could you crunch any louder?” Temi snapped at sister Lisa. It’s not true that 99% of diets fail because of Lisas in the kitchen, but it doesn’t help.

As for Temi’s dieting companion Bose, she flew off for a Spanish mini break to cheat. “What happens in Barcelona,” she told her phone as she snacked on pastries, “stays in Barcelona”. If you’re going to make a claim like that, Bose, perhaps don’t let Channel 4 broadcast it to the nation.

January 2021 is no time for such nonsense. Nights are long, hospitals full, opportunities for delight minimal, HMRC texting me every hour demanding payment every five minutes like a particularly boring lover. What we need is what we can’t have, namely waiters queuing at our table with dessert trolleys, cheese trolleys and glasses of lovely drinks. What we get is what we always get: forced atonement for our presumed Christmas excesses, TV punishment beatings from those who have brilliantly found means of monetising our seasonal guilt while looking insufferably smug.

Abdelmoneim, for instance, went on a diet of blue-coloured muffins so a nutritionist could monitor his “transit time” and make a point about the individuality of metabolic rates . His transit time was less Northern Line, more Shanghai bullet train and his poo turned blue within 24 hours. He examined the contents of his toilet bowl with self-satisfaction. If we ever take to clapping the NHS again, the memory of that shot will make my applause muted.

READ  Type 2 diabetes: Could having the condition make you more susceptible to the coronavirus?

While researchers microanalysed Abdelmoneim’s poo, they didn’t test whether January’s glut of diet shows, fitness supplements and self-improvement apps work. My data suggests they don’t, but rather contribute to both weight gain and its ugly sibling, denial.

This show has been running for six series now and seems to have no improving effect on the nation’s weight, perhaps because its contents deconstruct its title. One of the hosts offered a disclaimer: “Crash dieting is not advised by most health professionals.” Each of the six participants was put on a crash diet, though, and there was no suggestion that any of them would make permanent lifestyle changes. Even Maurice revealed his yoga pants are destined to be mothballed.

Worse, all six celebrated losing a few pounds by putting weight on again. Debra and Lesley toasted their weight loss with champagne in their hot tub. Mick and Maurice raised celebratory glasses of brandy. Temi and Bose were filmed at a lavish birthday meal. How are we to change our diets for good? If Channel 4 renamed the series How to Lose Weight Badly, that would be a start. 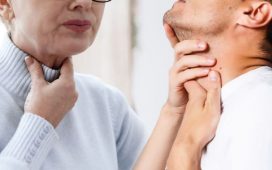 Mouth cancer: Having a difficulty swallowing food could be an indication of the disease 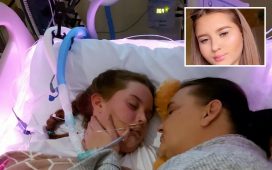 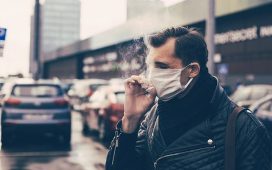 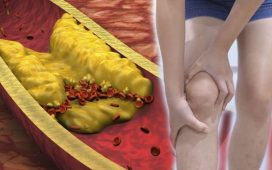 High cholesterol: Cramping, achiness & pain in the legs could indicate levels are too high

Will Young: ‘I pray that lessons are learned’ after twin brother’s suicide