NEWSCABAL > lifestyle > How to grow your own wedding bouquet
lifestyle

How to grow your own wedding bouquet


Looking to cut costs and add another personal touch to your wedding at the same time?

Why not consider growing your own bouquet?

On top of the money you could save, growing your own bouquet could also prove a lot better for the environment than getting your blooms from a florist who imports them.

Shannen Godwin, spokesperson for plant and bulb company J Parker’s, says: ‘Natural arrangements can have a direct correlation to the theme of the wedding, but also display more thoughtfulness when it comes to their selection and the craft of the bouquet.

‘Instead of focusing on the trends, bear in mind the seasonality and the sentimentality behind choosing and growing your wedding flowers.

‘These are subtle yet romantic personal touches which make such an important event feel less orchestrated.

‘In the end, the beauty of the wedding flowers lies in the work done to nurture them.’

With that in mind, if you’re interested in growing your own wedding bouquet, the team at J Parker’s has put together some advice for you.

Be careful what flowers you choose

It sounds like an obvious point, but it’s still an important one.

Firstly you should make sure the flowers you pick will be happy to grow during the time of year you need them to.

Unless you have been or plan to grow your flowers for some time, you’ll want to choose annual blooms rather than perennials, because the latter usually need around three years to grow strong enough stems.

If you really want to have a perennial flower in your wedding and don’t have lots of time for the stems to grow strong, the team at J Parker’s recommends using it for boutonnières.

If you can, try and pick flowers that are a variety of different shapes, sizes and textures to get a good balance in the bouquet.

Plant the flowers in a pot first

Once you’ve picked the right flowers, the team recommend planting your seeds in pots first until they germinate.

You’ll want to plant a lot of seeds because wedding bouquets need a lot of flowers.

Once that happens, you can move them outside to a sunny spot, making sure it’s not a place that gets excess water or has weeds.

Keep doing this until the day before your wedding, which is when you should harvest the flowers for your bouquet.

When you do this, the team recommends cutting the stems at a 45-degree angle with a sharp pair of scissors and putting them in a clean bucket after removing and stray leaves.

Use a cooler to keep the blooms fresh

If you want to keep your bouquet super fresh, it’s worth popping it in a cooler until you’re ready for it to be on show.

This is an especially good idea if you’ve opted for easy-browning white flowers.

The team also recommend using a spray bottle to keep the blooms happy during the day.

On top of that, try to keep your cut flowers away from sunlight, food, other plants and/or ripening fruit wherever possible.


MORE : How to plan a beautiful backyard wedding for less than £1,000


MORE : Couple invite only strangers to their wedding – including five bridesmaids they met on Bumble


MORE : Moment long-lost brothers meet after 60 years – and one attends the other’s wedding 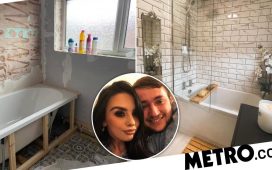 Couple save £3,400 by carrying out DIY bathroom transformation in just one week 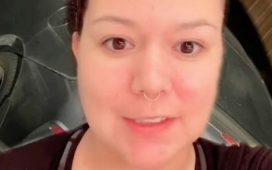 BIG WEDDINGS ARE BACK – Here’s what you need to know 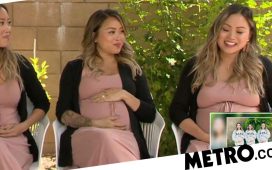 Triplet sisters all fall pregnant at the same time 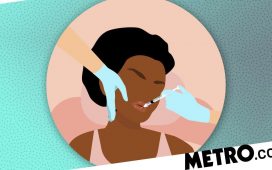