June 1994 was a special month for Saudi Arabian football when the team went to a first World Cup and Saeed al-Owairan slalomed through the Belgium defence in Washington to send the Green Falcons into the knockout stages.

October 2021 is surely the best since, for reasons that had nothing to do with the country’s Public Investment Fund taking an 80% stake in Newcastle United. At the end of the first week, the national team, with two wins in the final round of qualification against Vietnam and Oman under their belt, defeated Japan, long regarded as Asia’s best, 1-0. Five days later, there was a thrilling 3-2 victory over China in front of 50,000 delighted fans in Jeddah.

With four of the 10 games in the stage completed, Saudi Arabia are the only one of Asia’s 12 surviving qualifiers to have a perfect record. It would be a surprise if the team did not make the short journey to Qatar a year from now.

The coach, Hervé Renard, who took the job in July 2019 after leaving Morocco, has added a more aggressive and hard-working ethic to the guile of Salman al-Faraj and Salem al-Dawsari. The three-times Asian champions go to Australia in November confident of a positive result.

The national team are not alone is being on an upward trajectory. The Saudi Professional League is arguably the continent’s most exciting, helped by the Chinese Super League’s financial turmoil.

Four days after the victory over China, Al-Hilal and Al-Nassr, the big Riyadh clubs with 26 league titles between them, were in action in the AFC Champions League quarter-finals. With the tournament split into geographic halves (east and west) until the final, the pair knew they would meet in the western zone semi-final if they won. They did so easily. Al-Nassr thrashed Al-Wahda of the United Arab Emirates 5-1. Al-Hilal then strolled past the Iranian powerhouse Persepolis with a 3-0 victory.

That ensured a febrile all-Saudi semi-final three days later, with one half of the Riyadh stadium yellow and the other blue. Al-Hilal won 2-1 and the defender Ali al-Bulaihi did a Graeme Souness and planted the club flag on the centre spot after a post-match melee.

Compared with rival leagues in the region such as Qatar and the United Arab Emirates, big Saudi clubs can create big atmospheres. Some of the fan tifos are top class and there should be another in the Champions League final on 23 November when Al-Hilal are expected to win a record fourth Asian title against Pohang Steelers of South Korea.

Spending on foreign players does not come close to matching China of a few years ago but there are plenty of stars in Saudi Arabia. Al-Hilal won a 17th league title in May and added Matheus Pereira and Moussa Marega to a team containing the former France international Bafétimbi Gomis and several Saudi internationals. Leonardo Jardim, who led Monaco to the 2017 French title, is the manager.

Al-Nassr have the former Morocco striker Abderrazak Hamdallah, the Cameroon international Vincent Aboubakar and Anderson Talisca and Pity Martínez, the 2018 South American player of the year.

The future would be brighter still if underlying problems were resolved. Chronic short-termism when it comes to hiring and firing coaches no longer surprises but still shocks. Al-Ittihad, third last season and top this until beaten last weekend by two goals from the red-hot Odion Ighalo of Al-Shabab, fired their manager after one game of this campaign and Al-Taawoun and Al-Tai after two each.

That was August. Four have followed, meaning seven of 16 clubs have changed coach with the season not one-third finished. It is not surprising there is little or no incentive for managers to look beyond the next game or gamble on young players.

The league allows seven foreign players per club compared with four in most Asian nations and teams like to stack up on attacking talent. Whether this is a cause or result of Saudi Arabia struggling to produce strikers to follow Sami al-Jaber, who appeared in four World Cups and scored at three, is debatable. Abdullah al-Hamdan was seen as the next big thing and joined Al-Hilal in February for big money but the 22-year-old has managed less than an hour of playing time this season. It would not be such a problem if local players went overseas but that has yet to happen.

Also yet to happen is for clubs to be separated from government ownership and established as private sporting entities to help bring administration, operations and marketing to a level that matches the football. This part of the country’s Vision 2030 plan aimed at diversifying the economy has been delayed. Clubs still have a habit of running up substantial debts and needing a bailout, which happened in 2018 when Crown Prince Mohammed bin Salman provided about £245m to clear top-flight clubs’ debts.

The big Saudi clubs, such as Al-Hilal, with more than 10m Twitter followers, could surely prosper as commercially run entities and lead the way for others. At the moment on the pitch Saudi Arabia is leading the way in Asia. 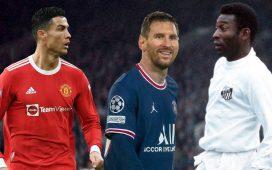