For football fans, the winning 1966 England World Cup team has assumed almost legendary status, but many of the team are now linked by more than a proud moment in national history, and tragically that link is dementia.

This week, it was revealed that Sir Bobby Charlton, 83, has become the fifth member of the squad to be diagnosed with the degenerative brain condition, while Nobby Stiles, Martin Peters, Ray Wilson and Jack Charlton all died with the disease.

And this looks to be more than coincidence: a study by Glasgow University last year found former professional footballers are three times more likely to die of dementia than others the same age. 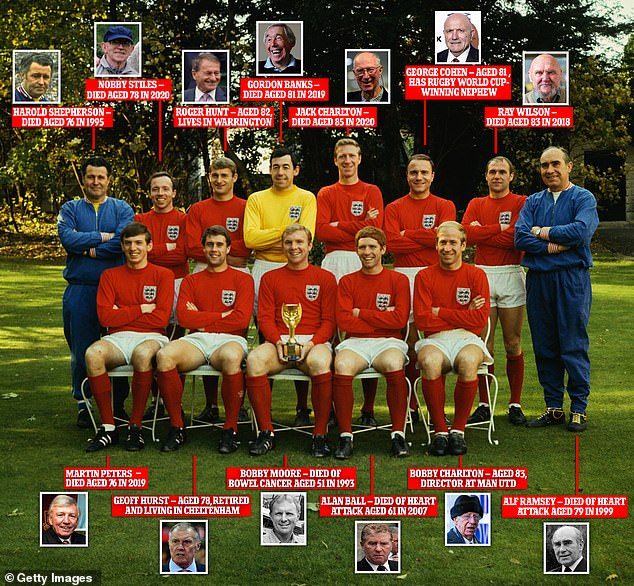 For football fans, the winning 1966 England World Cup team has assumed almost legendary status, but many of the team are now linked by more than a proud moment in national history, and tragically that link is dementia

The exact process is not clear but it’s thought repeated mini injuries to the brain (mini concussions) when players head the ball or collide are to blame.

Back in the 1960s, the ball was made of very thick, hard leather. Since then, they have become far lighter.

Repeated blows can trigger degeneration of brain tissue, which prompts the production of tau, a form of protein associated with dementia.

An animal study published in the Journal of Neurotrauma, in January, suggested this build-up can begin within a day and in areas of the brain other than the point of injury.

Some experts, such as Dr Bennet Omalu, an associate clinical professor of medical pathology at the University of California, who was the first to identify chronic brain trauma in American footballers, now want under 18s banned from heading footballs.

‘Each time a child guides the ball into the net with their head, it can cause microscopic injuries to the brain,’ he tells Good Health.

Dr Omalu argues that these micro injuries are especially significant as the brain is unable to regenerate to any great extent.

READ  MPs call for 'life-changing' Kuvan to be made affordable

Certainly there is now sufficient concern to lead to new rules banning under 11s from heading during training sessions (the advice is that heading drills for under-18s should be reduced). 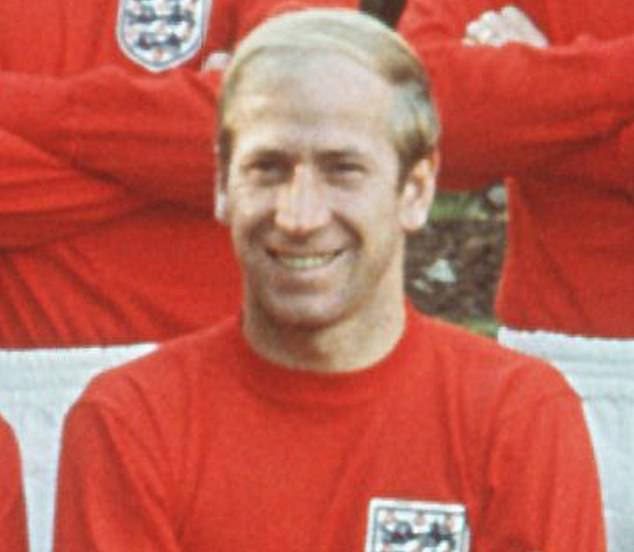 This week, it was revealed that Sir Bobby Charlton, 83, has become the fifth member of the squad to be diagnosed with the degenerative brain condition

But it’s not simply footballers who may be at risk. Research suggests that even minor head injuries — such as following a fall — could be a problem but it’s not being treated as seriously as it should.

Currently concussion — characterised by headache, dizziness, vomiting, nausea, confusion, slurred speech and vision disturbance following a knock or injury to the head — is generally considered to be a relatively mild, temporary affliction.

But research by Canadian scientists shows concussion may be far more dangerous and far-reaching than previously thought.

Using scans, the scientists discovered that brain activity, blood flow and even physical damage to the structure of the brain following a head injury were still present 12 months later, reported the journal Neurology in November.

And many may be affected — a study in the National Academies Press, in 2014, suggested that 20 per cent of concussion patients found that symptoms lasted months or even years.

Someone who knows just how debilitating this can be is professional footballer Daniel Parslow, who was forced to retire from the game he loved after banging his head into another player’s arm during a match 18 months ago.

Daniel, 35, started to show symptoms of concussion within minutes of the collision. ‘I couldn’t see, then I felt woozy and unsteady on my feet,’ recalls Daniel, who played for York City Football club. He’s still experiencing symptoms and had to abandon the career he’d cherished for 17 years.

‘I planned to play football for at least another few years,’ says Daniel, who is married to Emma, 32, a photographer.

Dr Oliver Charles Cockerell, a consultant neurologist at The London Clinic, says concussion occurs when the jelly-like brain — is shaken, triggering a release of neurotransmitters (chemicals that send messages between brain cells), which it’s thought together with transient swelling might produce long-term damage.

The standard medical advice is to rest to allow the ‘brain to heal’. However, Dr Cockerell says: ‘Rest almost never helps and can be counter-productive.

This is because a significant part of minor head injury is autonomic dysfunction — meaning parts of the brain that control blood pressure, flow, and breathing are affected. Rest makes this worse and a gentle return to activities is usually a much better option.

‘If the symptoms are very bad or worsen with exercise, then rest is necessary. But a gradual return to normal activities as soon as possible is usually the best option.’

The charity Headway says they hear from many people affected by post-concussion syndrome with symptoms ranging from difficulty in concentrating to dizziness and nausea, but it’s a condition that continues to be overlooked.

Mike Loosemore, a professor in sport and exercise medicine at University College London, says 99 per cent of concussion cause no problems if treated correctly.

He adds: ‘Hospital trusts should be developing specialist concussion clinics to give specific advice depending on the concussion symptoms.’ This is because patients may require different interventions, from medications to specialist physiotherapy.

People who have chronic symptoms after concussion ‘usually have post-traumatic migraine,’ says Dr Cockerell. ‘This can also cause dizziness and problems such as depression and anxiety.’

After Daniel’s on-pitch collision, he was deemed well enough to go back to play but his vision became blurred in the last minute of the first half — he told the team doctor he also felt sick and was diagnosed with concussion. 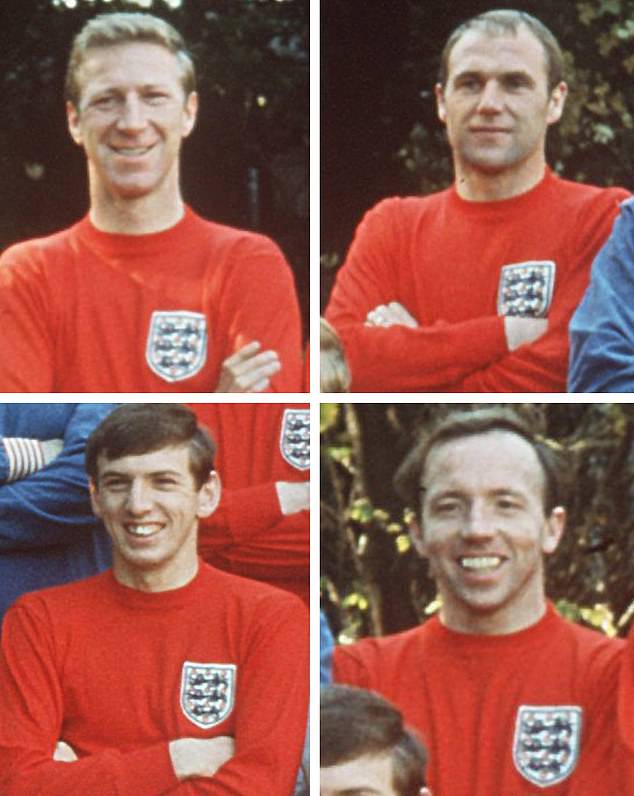 READ  How to boost your immune system: Five things you can do during the coronavirus pandemic

Daniel went to hospital but was sent home after two hours. ‘I tried to sleep but my head ached,’ he says. ‘No painkillers would touch it.’

Two weeks later, he still had a headache, vision problems and couldn’t drive or play football.

A month later, Daniel was starting to develop other symptoms — his arms and legs ‘felt like sand bags’.

‘My vision was also still not right but the headaches were the worst symptom.’ When he tried an exercise bike, he blacked out.

‘The vision got better but I still get headaches and cannot do strenuous exercise,’ he says.

Daniel, who now works as an accounts manager in his family’s business, says he’d felt more pain from heading balls than from the on-pitch collision — ‘but that collision changed my life’.

‘I want people to be more aware of the dangers of concussion.’

His words couldn’t be more timely following the sad news about the fifth member of the legendary team of 1966 to develop dementia. It’s clear a simple knock to the head can be anything but. 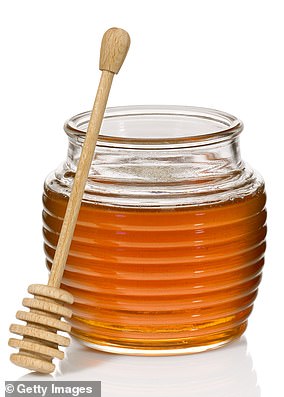 Manuka honey is produced by bees that pollinate the manuka bush, native to New Zealand. It has antiviral and anti-inflammatory benefits, and acts as an antibacterial, with use in dental hygiene.

It inhibits the growth of oral bacteria such as P. gingivalis and A. actinomycetemcomitans, associated with tooth decay, reported the Swiss Dental Journal in 2014.

Coronavirus symptoms: A metallic taste in the mouth could warn of a COVID infection

How long does the COVID vaccine last?

A Covid Christmas and the price of life | Letters